Just got around to loading the new CS4 onto my studio machine. This computer looks like a mini-refrigerator and my neighbors kid me (I think) that their lights dim when I turn it on. I've got a Dell Precision 690 running quad core 3.00GHz and for now 8 GB RAM, I also have dual NVIDA Quadro NVS 285 display cards that have two Dell 24' monitors as well as a Wacom 1200 attached; I won't even go into the storage space. I configured this computer about 2 years ago and was running it on Win XP Pro 64 before making the move to Vista Ultimate 64 late last year.

As a side not I had what turned out to be a minor problem but I went to our local computer geek store while as I was explaining the system their eyes rolled into the back of their heads - they did admit it was beyond their level until one person stepped out from the back. I figure they kept him chained in the back as he really didn't have very good interpersonal skills but he knew computers and that's all I wanted.

Running a system like mine is no piece of cake as I found out. Yes it's fast and yes it delivers what I ask of it so long as I feed it the proper software.

What's the point of all this? Simple, as I said before I just completed the install of Photoshop CS4 64bit. I've had it up and running now for less than 30 minutes but I can tell you this sucker is sweet! It recognizes the RAM I have available which is well past the 4GB range. I've gone to the preferences and set what looks like will be good for me and opened a normal size file. This is a 60x30 inch panorama at 300 ppi which is 1.02GB in size. The file opened in way less time than it's ever done before - very fast indeed.

Finally a 64bit image processing software! What a great tool to accompany Capture One 4.5 Pro in 64 bit. Looks like people have listened to those of us who operate 64bit.

Posted by ironcreekphotography at 11:00 AM 0 comments 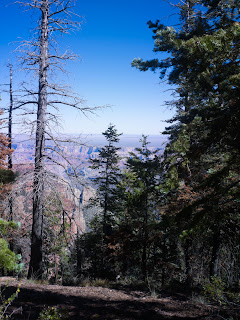 Posted by ironcreekphotography at 11:23 AM 0 comments

No, we aren't there and haven't actually gone back yet...

We had stopped at Burwash Landing Resort on our way to Alaska earlier this year staying at the RV park located right on Kluane Lake and about 10 miles away from Destruction Bay. We have very fond memories of our stay here; as a matter of fact we stopped for lunch and stayed for breakfast!

Don was busy in the camper while Sandy took a short walk out to the area around the nearby shoreline where she spotted an old abandoned rowboat. The first image that follows is the one that Sandy took with a Canon G-9 while the second is the one that Don worked up in Photoshop giving the image a watercolor look.

We look forward to revisiting Burwash Landing and the friendly people there on our way to Alaska in 2010.

Your comments are always welcome! 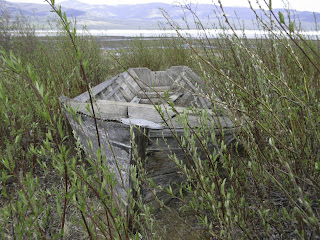 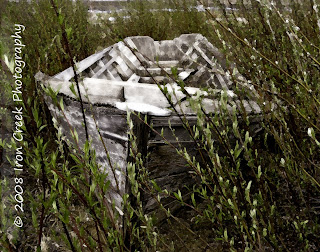 Sandy & I spent the past couple days at the North Rim of the Grand Canyon testing/evaluating a Cambo RS 1000 along with a P45+. The time spent was for me to see if I liked the system, could adapt to a new workflow, and more importantly capture images that would be of higher resolution and just all around better than what I've been using before (Phase 645, P30+ mainly with a Mamiya 28mm lens). Went to the North Rim in hopes of catching decent fall colors; spending the time in learning the technical aspects of shooting with a technical camera. We found that we were about a week to ten days early for the burst of colors and the sky was just plain crappy with no clouds in sight; here are samples from the past 3 days. 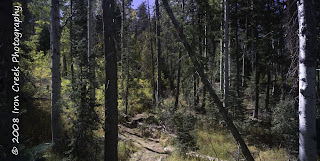 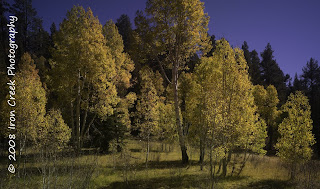 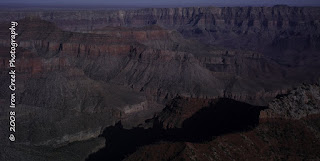 These samples just don't do justice to the images taken then again it's hard to really tell the quality of any image in a small JPEG.

My conclusion is that this system is very good to great; in fact I'm waiting to hear back from Chris at Capture Integration has to an order status.

Once again I want to thank Dave and Chris at Capture Integration for allowing me the opportunity to have the equipment for the test.

Posted by ironcreekphotography at 10:19 AM 0 comments

Its early evening of October 2nd and I felt a sudden need to put thoughts/feelings into words and on our blog. Tomorrow, Friday October 3rd will be my 5th year anniversary of my retirement from the federal government boy times flies by especially when you’re having fun. An awful lot of water has gone under the bridge in the past 5 years; if it weren’t for the sudden passing of a closest friend I’d say the past 5 years have been really really great; instead I’ll just say they’ve been really great. A lot has been accomplished during this period beginning with the startup of Iron Creek Photography which has turned into a full time career; I now couldn’t even begin to think of anything I’d rather be doing.

Sandy retired November 2004 just 13 months after I did and since that time we’ve been going to some beautiful places to practice our new found trade/love. We’ve visited (sometime many times) places like Moab UT, Monument Valley, Yellowstone, Big Sur just to mention a few places; and we can’t forget the almost 60 day trip to Alaska (which we plan to return to in 2010).

So what are we doing now? Well for one thing I’m waiting till tomorrow and FedEx to arrive; our great friends at Capture Integration have loaned me a technical camera to try my landscape images with. We’re talking about the new Cambo RS1000 along with a couple lenses and a Phase One P45+ digital back. I’ve always shot DSLR’s and going to a Cambo has me slightly worried and greatly excited at the same time. I equate shooting the Cambo much the same as “old time” meaning that you can’t really see where you’re aiming at (unless you have the extra accessories which I won’t), there’s no auto focusing, and all the controls are on the lens to include the shutter control, sound neat…

What better place to try this new (for me) landscape system out that the North Rim of the Grand Canyon; we head up there next week for several days. With any luck we’ll be able to see nice Fall colors but even if we don’t we’ll still have the canyon; so wish us luck.

Just a heads up for our upcoming travels; we’ll be returning to the South Rim and Furnace Creek in Death Valley in December, then I’m off by myself in January to Northern California to the Redwoods and some coastal photography as well. I should have my own Cambo for the January trip if I find that the Cambo camera system works well with my workflow or in other words I find that I can understand all the stuff I need to know to make it work for me …..

We’ve just about finished putting our Alaska images on the website; we’ve got some great wildlife images as well as some nice landscapes.

Posted by ironcreekphotography at 6:06 PM 2 comments