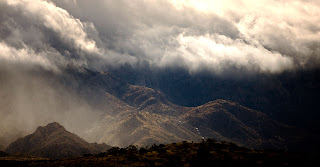 While we've included pretty pictures Don has also included some technical aspects.
Don's been shooting with the new Cambo RS1000 which is a technical camera with all movements (rise/fall and shift left/right) on the back allowing the lens to remain in place. He's also been experimenting with the auto-blending focus ability of Photoshop CS4; simply put the taking of several images of the same subject all the while using a different focus point for each then combining them all into layers. The final image (if done correctly) is an image that will be in focus from your toes to the horizon.

The first image is an example of the above. This was taken during our recent trip to the South Rim. This is three images layered one on top of another all having been shot at a slightly different focus point. 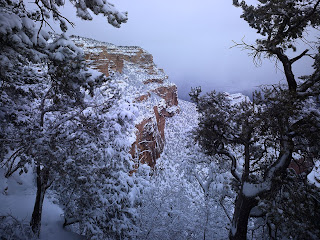 This image was taken yesterday during the snow storm (more on that a little later) that hit the Tucson area on Friday December 26th. This image was taken with a Phase One 645 AFDIII and Mamiya 75-150 lens. There are two separate images, one focusing on the plant and snow while the second focused on the mountains. The first image is the result while the next two give you the images as they where taken. 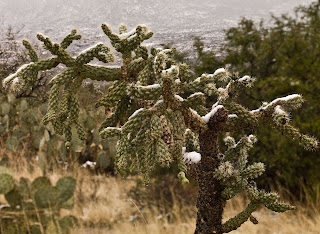 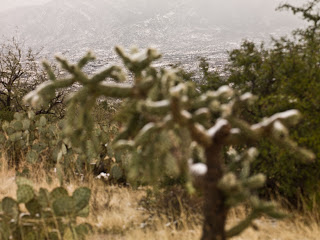 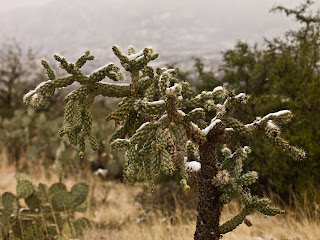 It used to (as we've been told) snow here once every 4-5 years. We had a couple inches fall during January 2001 while our house was being built but nothing more that we can remember till January this year when we got hit with several inches. Thinking that was it for a couple more years we woke early Friday December 26th to find it snowing again. It snowed for a couple hours then stopped and now 24hrs later it's melted, for the most part. We sit at around 3,300 feet and while we regularly have snow here it normally stays above the 4,500 foot level; it's normal to hear a 40 degree different between downtown Tucson and Mt Lemmon. 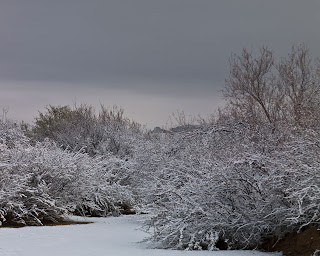 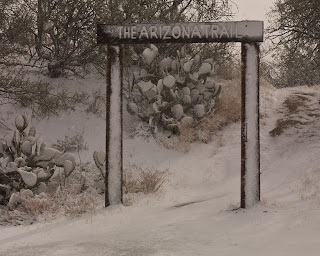 We hope you noticed the image on the top of this page. That image was taken by Sandy on Christmas Eve with her Canon 1DsIII using a 70-200 lens. Sandy took this from our backyard from which we can see Mt Lemmon.
We hope everyone has had a safe and enjoyable holiday season.