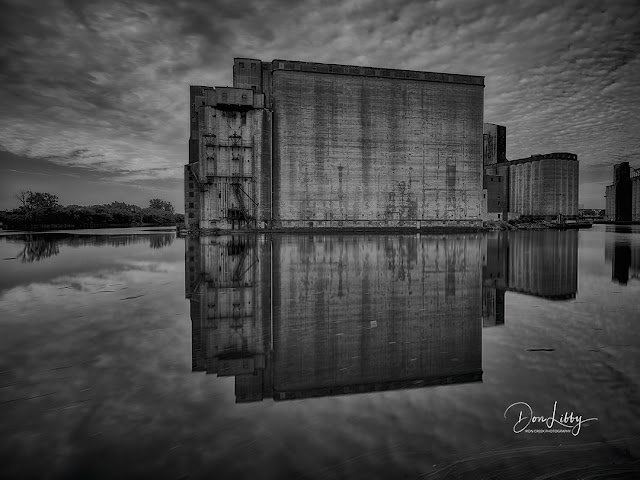 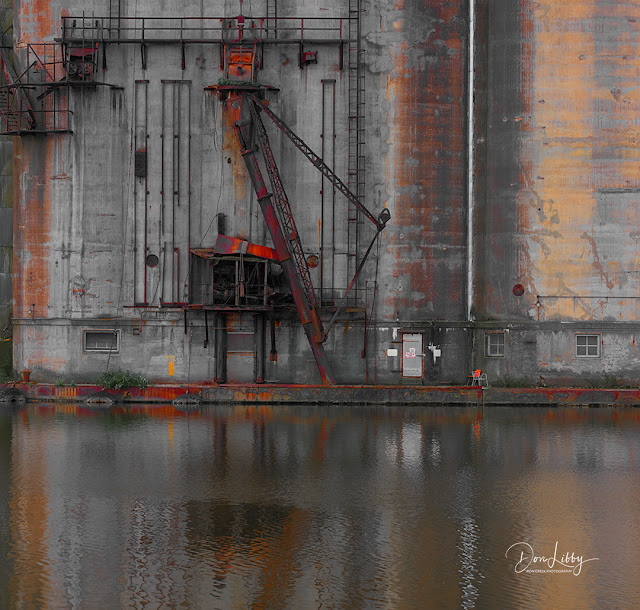 Hamburg Street close up
Fujifilm 50s  GF120mm f/4
f/8 1/60 ISO 100
I had the opportunity to meet Mark Maio, and attend his workshop in Buffalo NY in conjunction with Capture Integration.  The primary location was Silo City with side trips to Colonel Ward Pumping Plant 2, and Concrete Central. 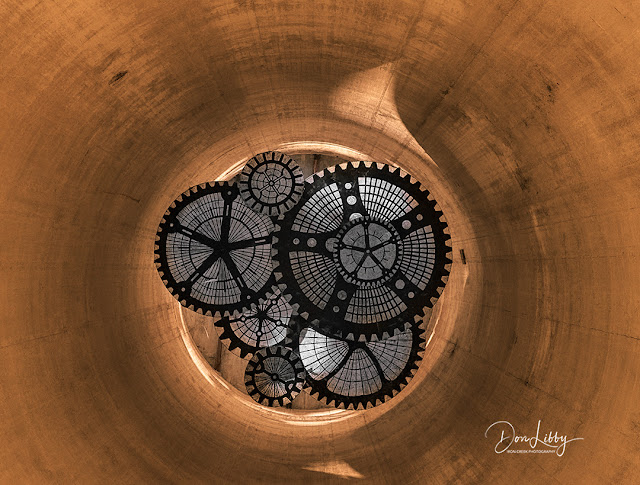 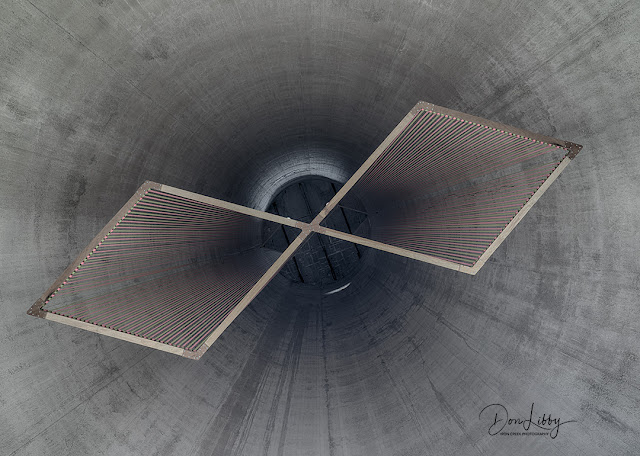 Art project left in a silo
laying flat on my back with the camera on tripod
Fujifilm 50s GF23 f/4
f/4 0.8 ISO 100
This was a very unusual experience for me for several reasons; I normally am the one hosting a workshop not an attendee plus I usually don’t photograph urban decay instead I capture cliff dwellings in the southwest.
I found this photograph on a wall.  Unknown date. 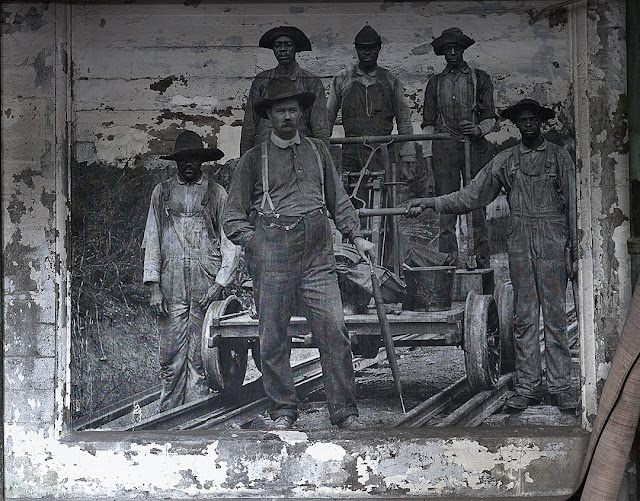 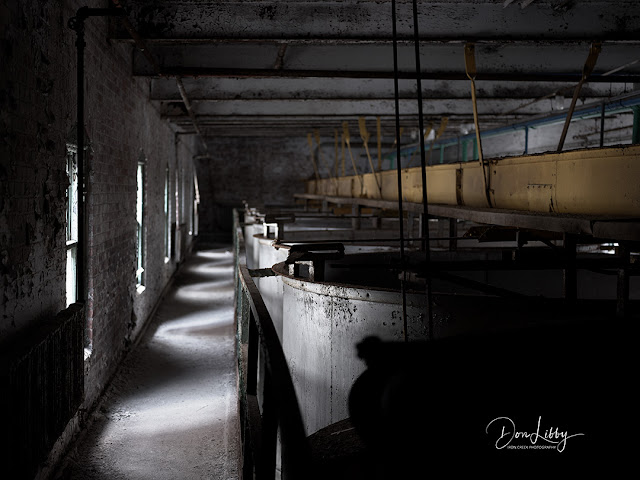 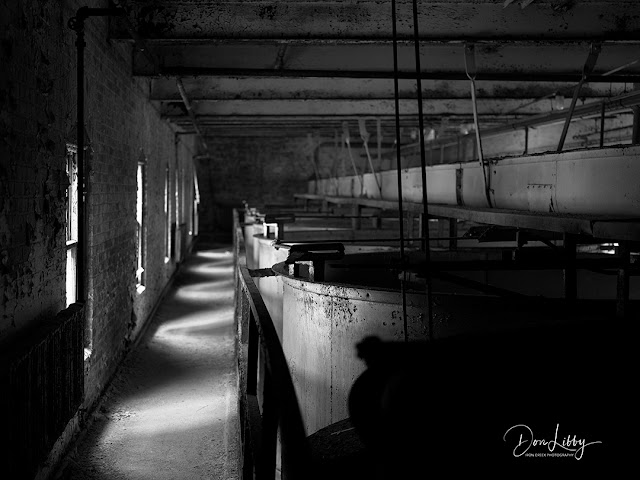 The immediate issue was which camera to use.  The Phase One XF/IQ1-100 would provide stunning full frame images at 100-megapixels but at a cost of weight.  On the other hand I could use the Fujifilm 50s with the cropped sensor and 51-megapixels.  What made my decision easier was the combination of weight and the fact that I would be climbing several flights of stairs each day.  Keeping a loose count of the number of flights of stairs climbed in one day totaled over 13!  I stopped counting afterwards… 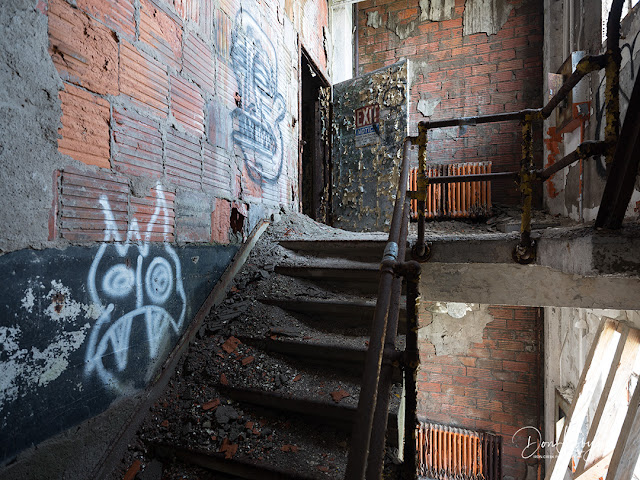 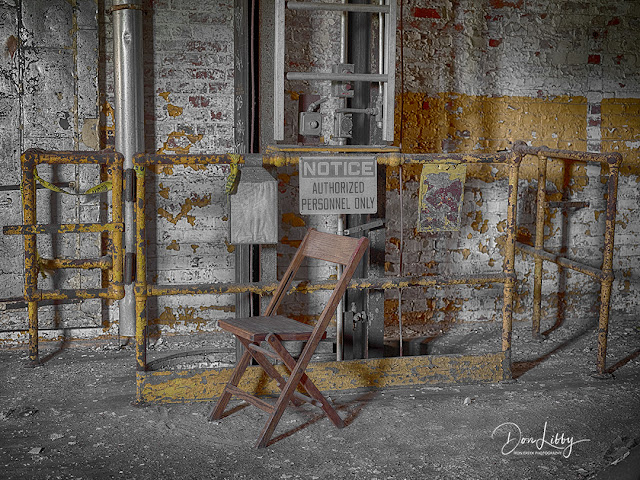 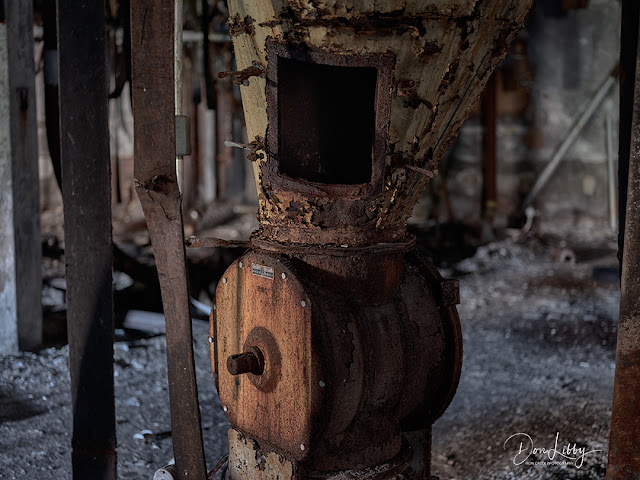 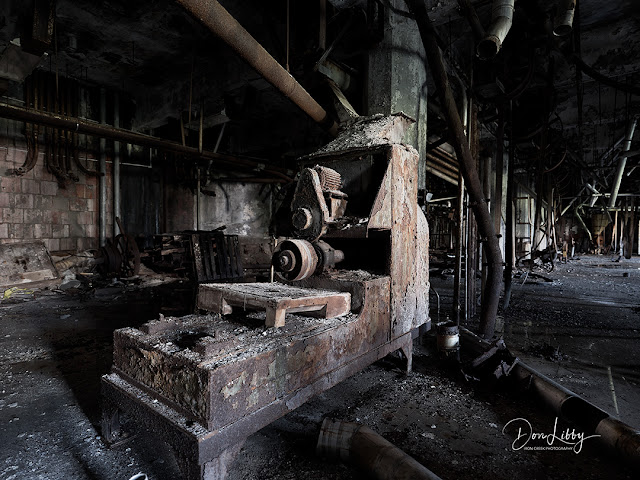 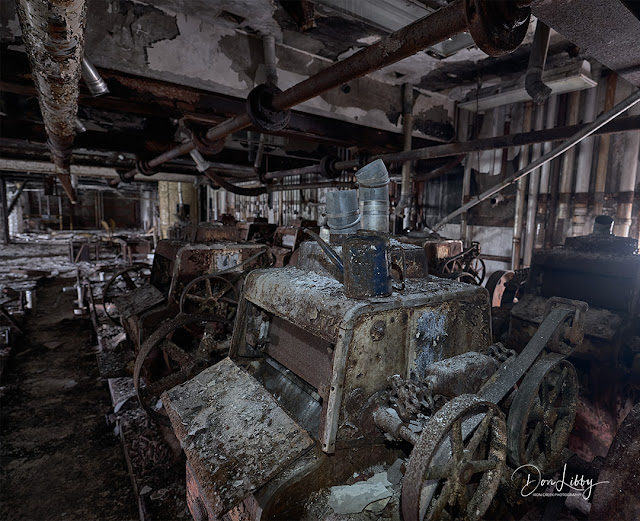 The floors were filthy littered with years of rust, trash, peeling paint, and a mixture of oil and water. In some cases it looked like the shift ended and the people never returned to clean up.  I saw the remnants of grain on the floor where plants took root as well on conveyor belts with standing rain water. As I said, a very dark, damp and in July hot and humid place to photograph.  Taken all together and I’m still very pleased I was able to visit. 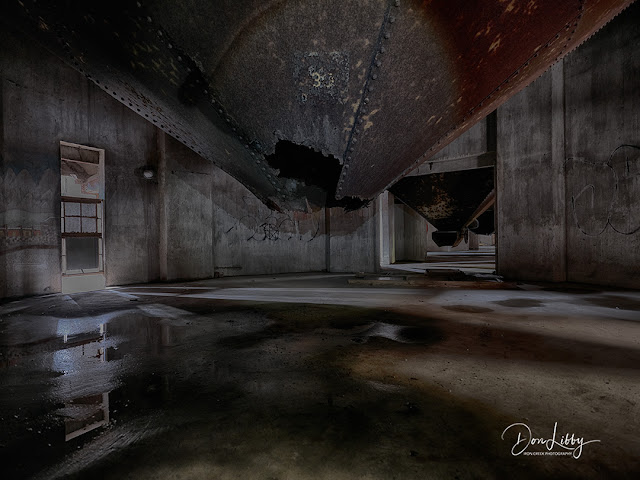 I put the GFX 50s through its paces, shooting low light in damp dark spaces.  Using auto focus I focus stacked on several occasions experimenting using the toggle switch moving the focal point instead of touching the focus ring in manual focus mode.  I used both the LCD and the viewfinder with no issues.  Some shots were taken inches from the floor while others were taken as high as the tripod would allow.  Shooting in a dark, damp environment necessitated the use of a tripod for all captures. 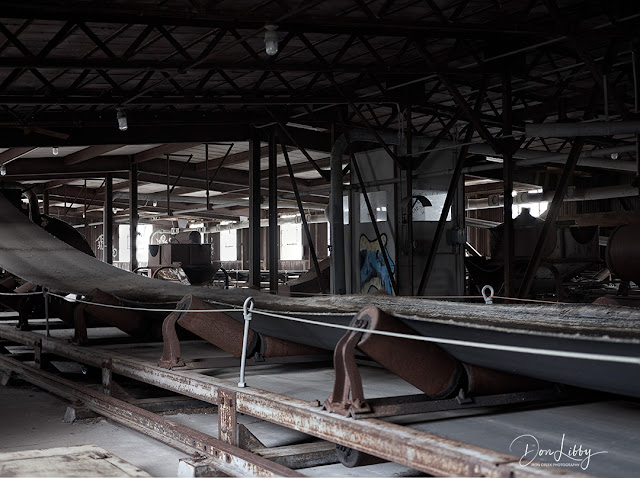 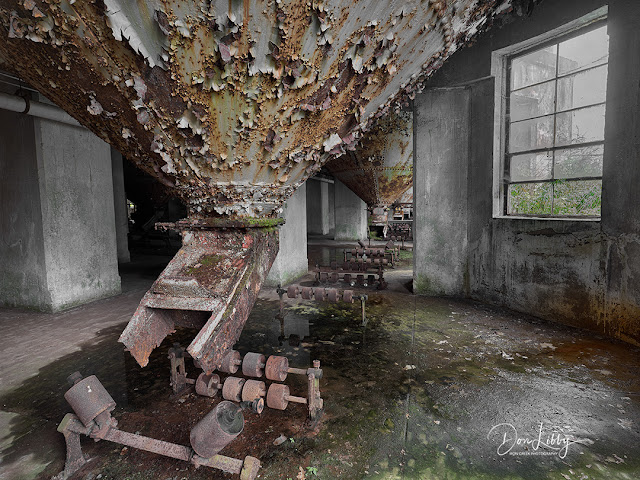 
The following 2-images are the result of focus stacking. Each image was shot with 5-captures autofocus, moving the focal point for each capture using the toggle switch.  In the past I would have had to use manual focus touching the focus ring. Not so with these as I only had to touch the rear of the camera body which was the most secure as it sat overtop the tripod.  Try it to see what I'm talking about. 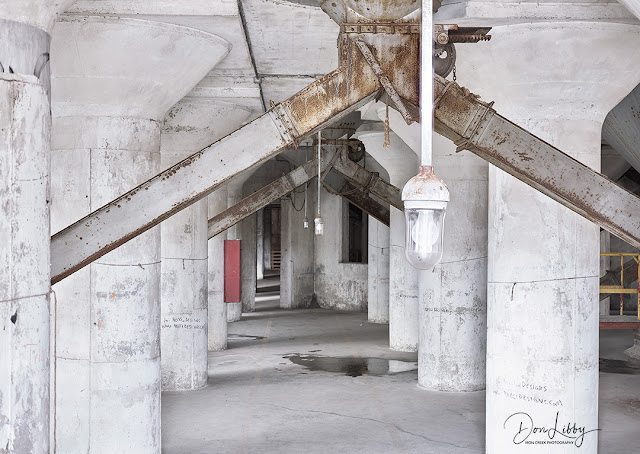 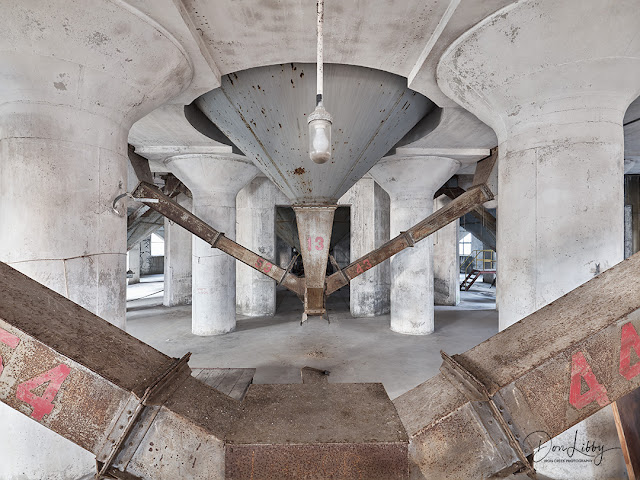 "White Room II"
Fujifilm GFX50s GF 63mm f/2.8
f/2.8 0.3 ISO 100
I used the same workflow that I developed prior to the trip with downloading the files onto an external drive then converting the files to .dng before using Exif Pilot to batch change two lines in the Exif.  All images were opened in Capture One Pro, initially processed before sending them to Photoshop CC.
The following 3-images were captured in the Colonel Ward Pumping Plant 2. The equipment photographed are the original pumps used to supply water to Buffalo.  I’ll be sharing more images on another blog. 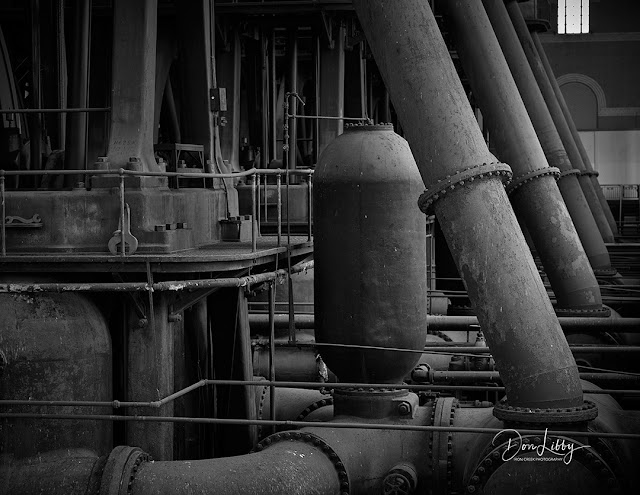 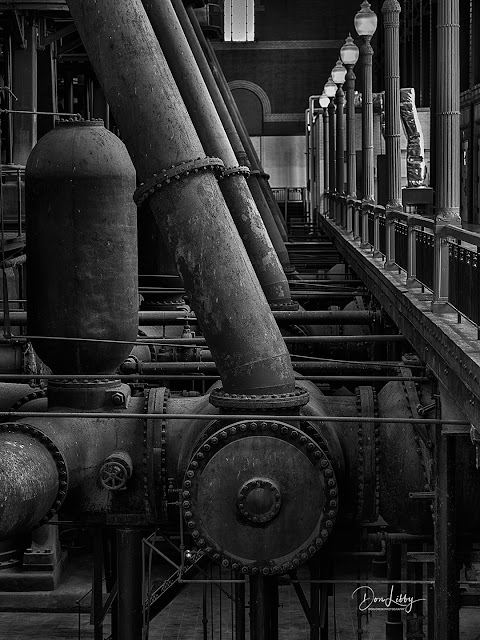 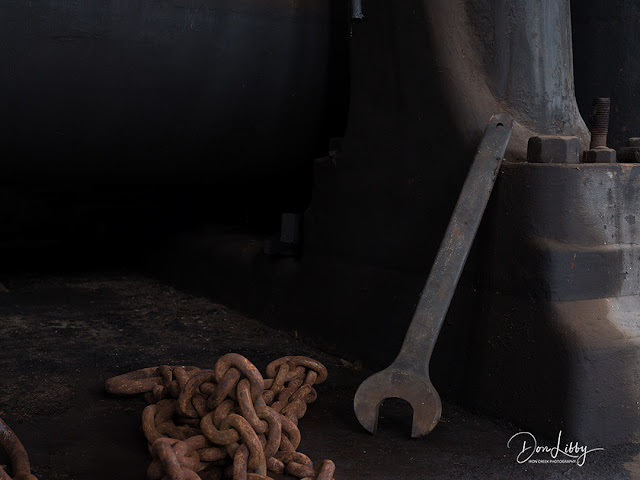 Fujifilm GFX 50s GF 32-64 f/4
60.7mm f/8 0.8 ISO 100
If you want to challenge yourself and capture urban decay and don’t mind climbing several flights of stairs, shooting in dark, damp and cramped spaces then I’d highly recommend the Silo City Photography Workshop.  Mark hosts several workshops per year and Capture Integration partners at least once per year.
The remaining images were all captured in Concrete Central; a place where there’s more paint on the walls than bare concrete. The floors are littered with trash and stepping away from the window light the walls very dark and spooky. 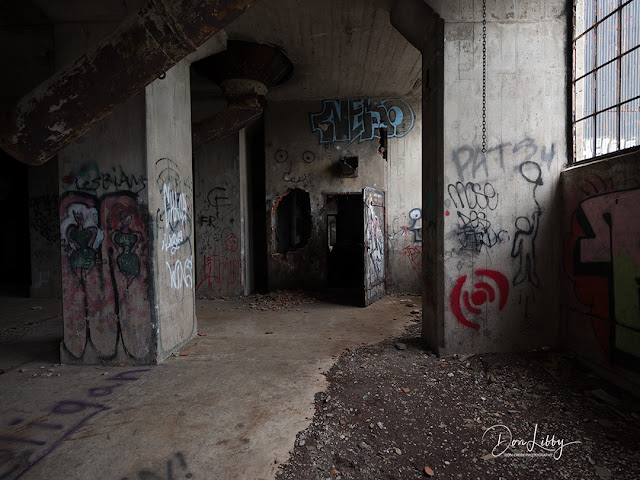 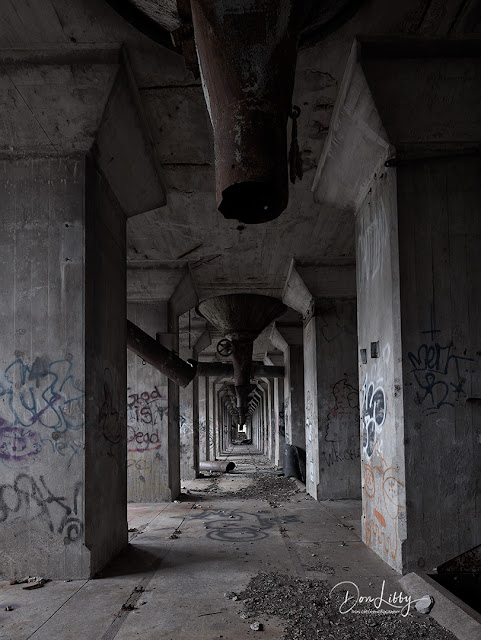 Fujifilm GFX 50s GF 23 f/4
f/4  1/4  ISO 100
Two images focused stacked
I found working with the GFX50s easy and enjoyable.  I had 5-shooting days capturing 466 images with no issues.  Likewise each lens performed as I had hoped it would producing crisp clear and clean files even at a higher ISO.  The more I use the GFX 50s the more I like it.


Posted by ironcreekphotography at 11:24 AM