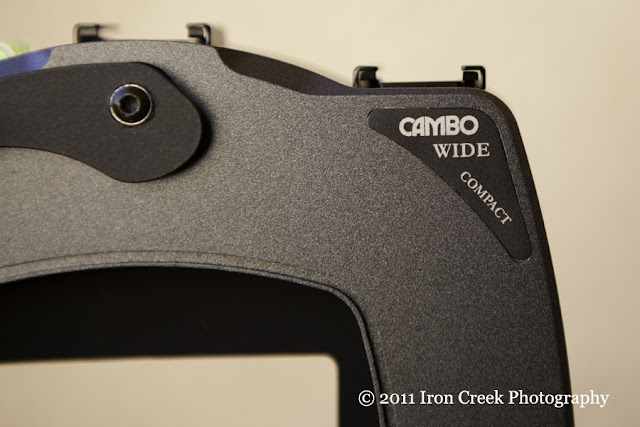 I still remember Michael Reichmann's article of the Cambo WDS which he titled "Working with the World's Most Expensive Digital Point-&-Shoot" as this article lead me into the wonderful world of Cambo cameras. I also remember watching a later video of Mr. Reichmann leaning over the side of a rubber boat in the Artic capturing images with the WDS handheld. 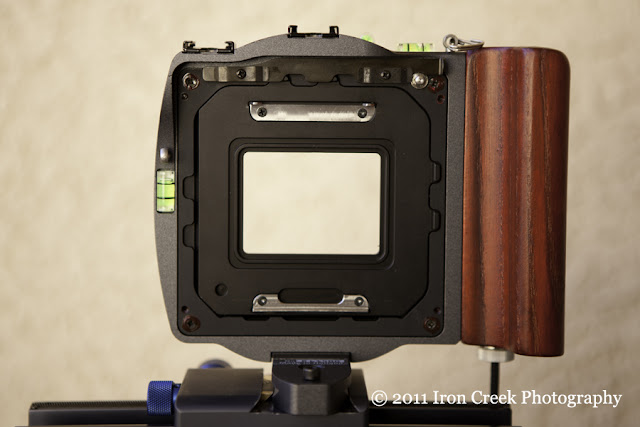 Rear View
Fast-forward to the Fall of 2008 and I've just returned from a 30-day shoot in using my Mamiya 645 and Phase One P30+.  I decided on this trip that I wanted/needed a better system to capture my landscape images and decided on a technical camera.  I contacted my friends at Capture Integration and asked to borrow a Cambo WDS to test.  Everything was going smoothly until just before they were to ship the camera, lens and a P45+ to me; the WDS was now unavailable; however they had a new WRS so it was shipped instead.  I took the WRS, a Schneider 35mm lens and P45+ to the North Rim of the in October of 2008 and within a matter of hours my fate was sealed.  I called Capture Integration and ended up keeping the WRS and lens and trading my P30+ for a new P45+ and have never looked back.  Within 6-months of buying the Cambo I sold all my Mamiya gear to include the body and all the lenses.  Later on I decided to test the WDS against the WRS and was then able to do so and wrote about it here.  Again after testing the two side by side I still favored the WRS.  All this brings us to the Cambo Wide Compact. 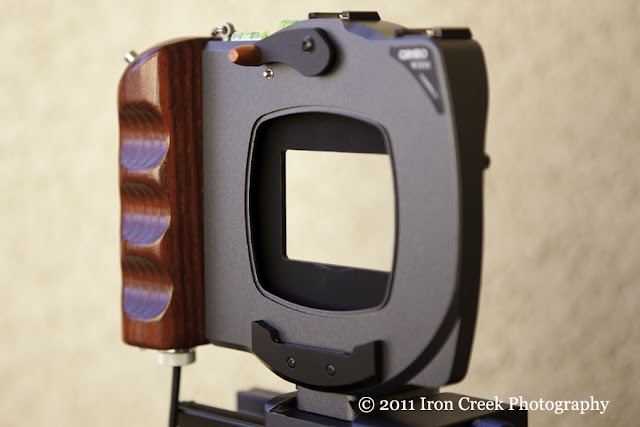 Front View
I've seen the Compact advertised on Cambo's website for sometime however while there are page after page of information on the WDS and WRS with just as many images there is virtually nothing offered on the Compact; it's almost as if this camera was more myth than reality. This lack of information and the fact that I've not been shy about promoting Cambo lead me to want to try to get a Compact and see for myself what this camera was all about. 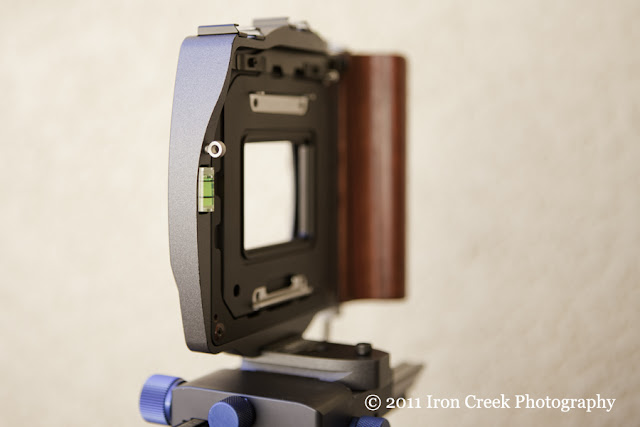 The Compact is slightly over 1 pound lighter while being very close to the same physical size. 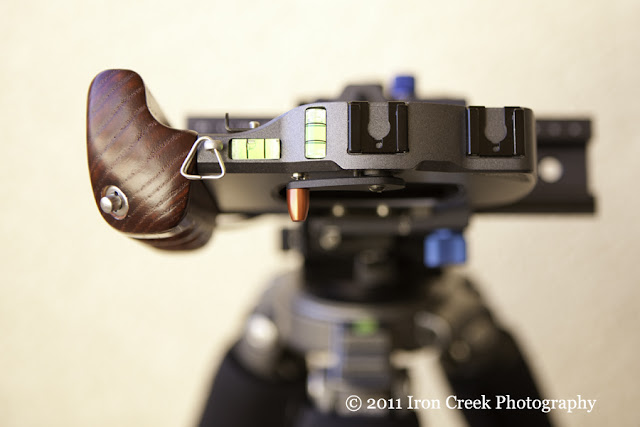 Top View
There are more differences between the WRS and Compact; the WRS offers both horizontal and vertical shits while the Compact offers none. Both camera bodies use the same lenspanels so lenses with the swing-tilt fit both.
I was very excited to test the camera and looked forward to doing so.

I received the camera last Monday (March 21st) and immediately set about to use it with my Schneider lenses and P45+. I need to step back a moment and explain what I use to capture my landscape images. As the Phase One P45+ needs a wakeup cable to turn on the back, I use a Kapture Group One Shot Cable Release (PHA-001). The One Shot connects the lens to the back and allows me by cocking the shutter and pressing the shutter release to communicate with the P45+ to wake it up for image capture. It's very easy and I've had no problems using this system. 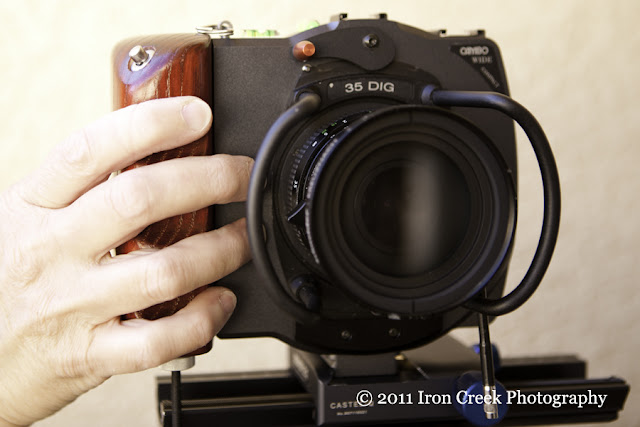 35mm lens with woman's hand for reference
The fly in the ointment is the integrated shutter release that comes with the Compact. It doesn't play well at all with the One Shot. I contacted Capture Integration and Cambo about this hoping that they have another cable that would work and today I received the following.
"The Copal shutter actually needs only a few millimeter to be triggered. The handgrip of the compact has been designed onceto be operated with an internal cable release, operated with a simple short push of an index finger, instead of the long travel of an“original” traditional cable release operated with a thumb. That is what the customer base wanted. The first design was indeed with a normal long cable release, but that is impossible to operate with an index finger, as either you have to reach high to get there first and then have lot of loose travel before final capture, while this way you can have instant capture, as they wished for.
If Kapture-Group has a product that requires much more “throw” than the integrated cable release of the handgrip offers, the only solution is to use this cable outside of the integrated one, but as is, we can not use it internally. You can also ask Kapture Group for a cable release
with a shorter throw. Sometimes designs are what they are for different reasons than applicable for others..."

So, with this news any hopes of a meaningful test are now gone.

All isn't lost however. The rest of the reply from Cambo included this...

"At the other hand, we have just introduced a set of wooden handgrips for the WideRS, which make handheld shooting much more comfortable than with the original aluminium grips. These wooden grips will take the original long-throw cable release also. http://www.cambo.com/Html/products_photo/set01/english/internet/Item22479.html" 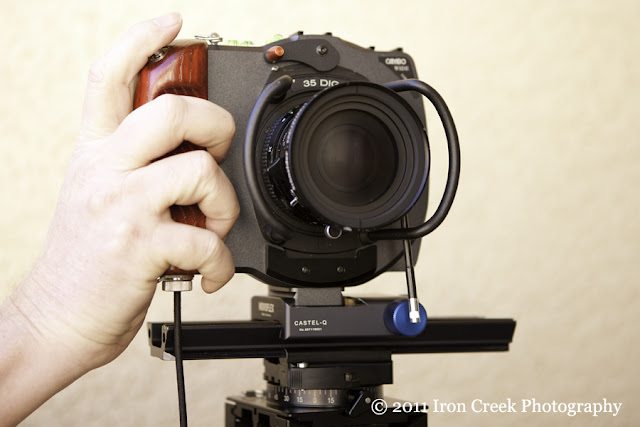 35mm lens with my hand for reference
I want to state that if I had been shooting with a Phase One P65 or one of the newer IQ backs I'd have had no problems as neither back require a wakeup and I would have just connected the cable diretly to the lens and off I'd go.
Who do I think the Compact is best sutied for? I'd say someone who has a WDS and wanted a more compact camera and didn't need the ability of shifts.

I want to make it perfectly clear that the Compact is a well made camera and were it not for the problem I have with it not working well with the Kapture Group I'd like even more than I already do. Then again if I had a slightly newer Phae One back I wouldn't even know this was a issue. 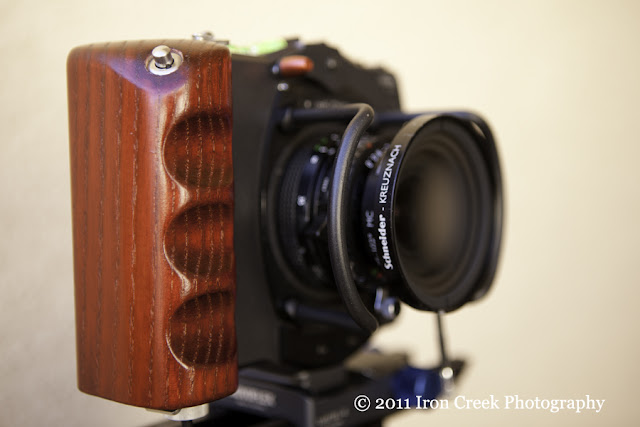 The Compact felt very good in my hands and I really like the idea of adding a wodden grip to the WRS. I've asked if the wooden handle will be somthing we might be able to add to a current WRS so stay tuned for the answer.


Even though I wasn't able to actually use the Compact I feel better because there now is at least more information and more images then before.
Please leave a comment if you have any questions.

Don
Posted by ironcreekphotography at 10:47 AM