Shooting Infrared with a Sony Nex-7 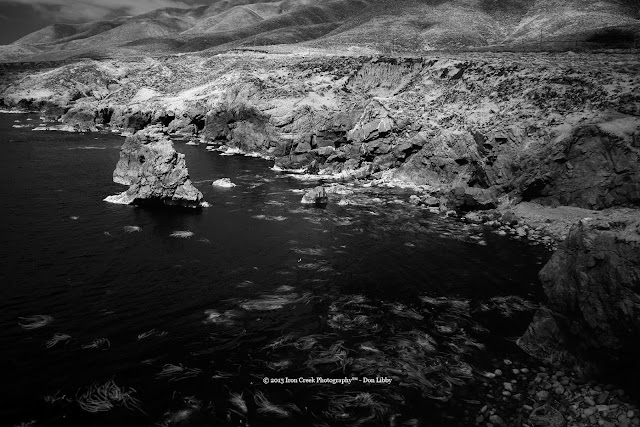 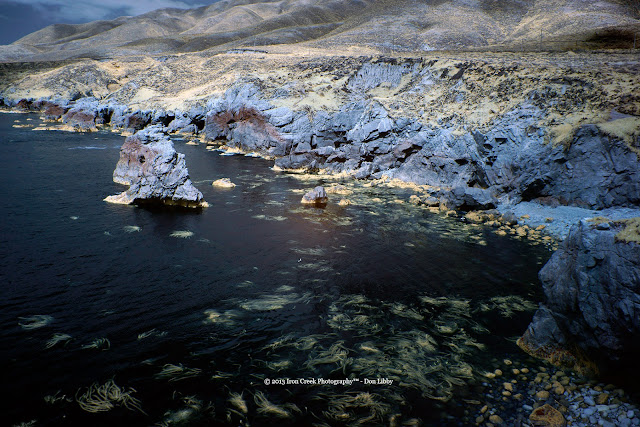 Garrapata State Park, Carmel California
18-55mm lens 18mm (27mm)
f/11 1/125 ISO 100
This will turn out to be a multi-part conversation regarding shooting infrared (IR) images with a Sony Nex-7.  On April 11th I gave a teaser about the subject; on May 3rd I gave some brief samples of the images captured shortly after I got the camera back from Life Pixel.  Now, I go a little more in depth on the subject of shooting IR with the Sony Nex-7 along with the processing of the files.  The good, the bad and the ugly. 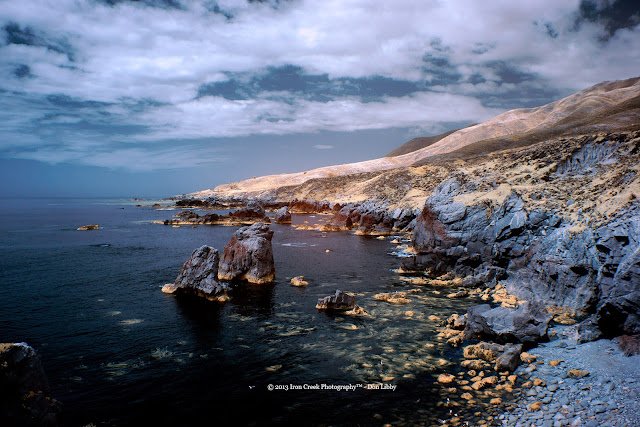 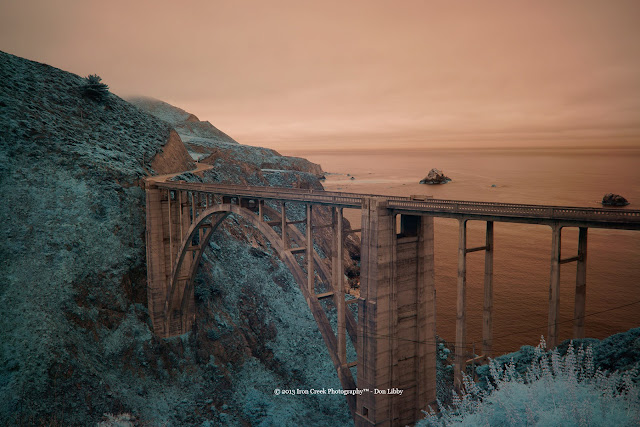 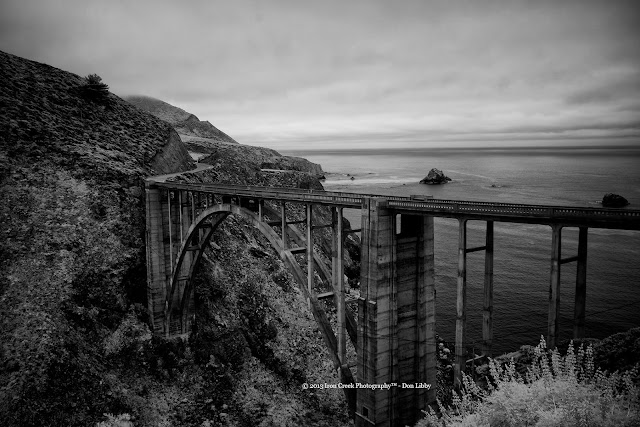 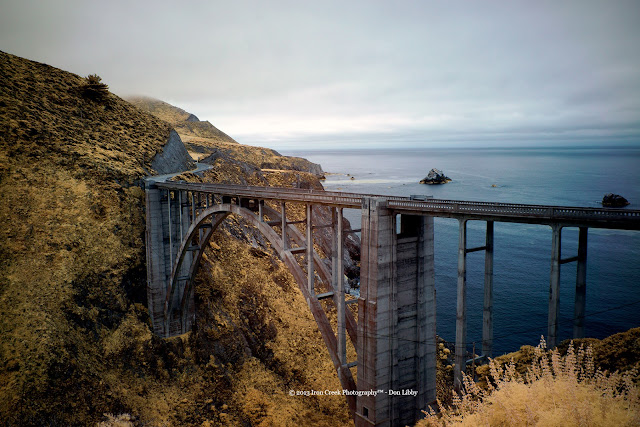 Bixby Bridge, Big Sur California
As shot, converted to black & white and Color conversion
20mm (30mm) f/11 1/80 ISO 100
When I first began looking at the Nex-7 as a candidate for conversion I found little written about it.  The most information I found was located on the various websites that offer the conversion services.  So far to date I've not found one instance of anyone writing about their experience. 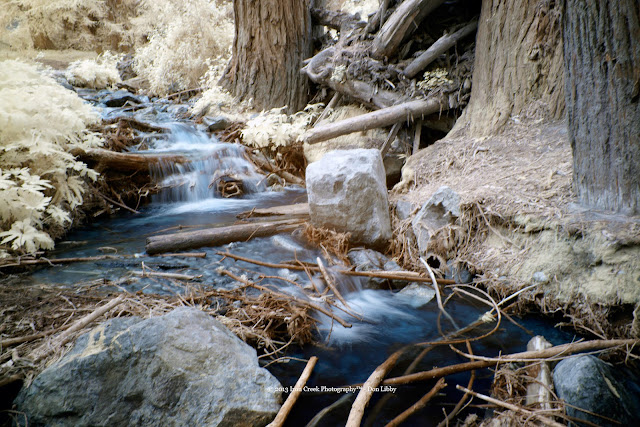 Julia Pfeiffer Burns State Park, Big Sur California
20mm (30mm) f/16 0.6 seconds ISO 100
Yes, you can "smoke water in IR
I highly recommend a visit to Life Pixels website as you'll find a wealth of information on the various filter choices, camera choices as well as sample of images and tutorials that include a multipage eBook "Digital Infrared Photography Primer" found here.  I figure why reinvent the wheel when the kind folks at Life Pixel already has one rolling?  You'll find much more information here than what I can hope to offer so go visit the site.
A word about Life Pixel.  I am not associated with the company, nor was I asked to indorse them in anyway.  I feel that when you find a great company to do business with it's beneficial to spread the word.  After all I want them to continue providing the great service for years to come. 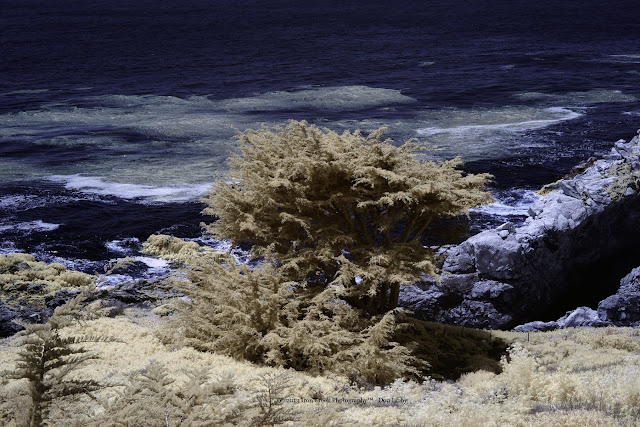 Garrapata State Park, Carmel California
18-55mm lens 50mm (75mm)
f/16 1/100 ISO 100
As written earlier, I choose to convert the Nex-7 the same as I did the 1DsII; using an "Enhanced Color Infrared Filter".  This filter transmits more of the visible red and is similar to a Wratten 70 gelatin filter.   Since it passes more visible red light the IR images have more color in them; more color in the sky as well as foliage.  The files can also be processed in Photoshop to produce a pleasing end result.
There's a problem though.  First, the filter is slightly darker thus the view from the LCD and Viewfinder is darker, much darker.  The best I can describe it is that it's like looking at the LCD through a pair of sunglasses.  I've got a friend who shoots infrared using a 720 filter which is brighter.  He keeps the camera in "P" mode and gets excellent results.  I tried that and quickly found it doesn't work for me and went back to the way I normally shoot which is "M" (manual).  I found by shooting manual I can see the scene clear enough in bright sunlight using either the Viewfinder or LCD.  All the images included here were shot in manual mode. 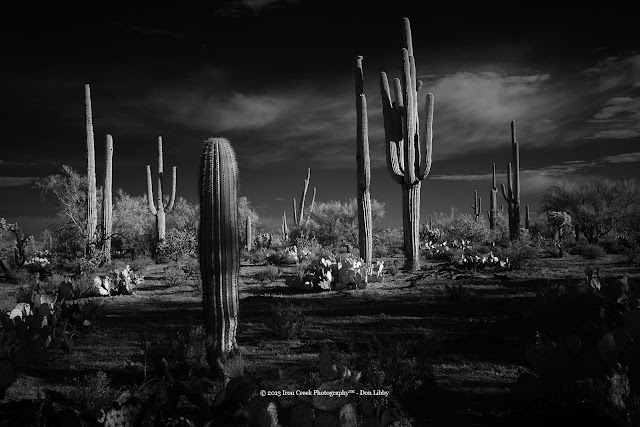 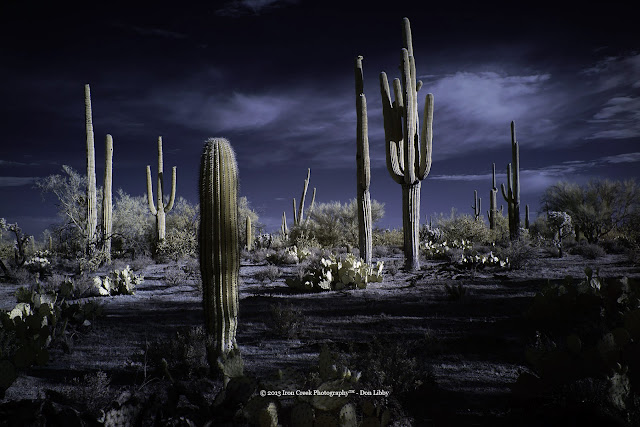 Okay there's another problem.  I figured to get rid of the bad first.  Photoshop and by extension Camera Raw can not properly process any infrared image which has a White Balance set for IR.  All's not lost.  If you use a Nikon or Cannon you simply use the software that came with the camera to open the file and then save as a Tiff.  The same holds true with Sony.  Sony has a program they call "Image Data Converter".  That's the good news.  The bad news is that it doesn't support 64bit which is what I have on my computer.  There's a work around.  I open the program and save 2-files to Tiff then close it down before it stalls and quits.  Then I open it again and do 2-more.  It sucks but until Sony gets around to supporting 64bit I'm stuck with this type of workflow.  One other thought before I end this portion.  I shoot RAW files as there's so much more information included than with a Jpeg.  Please, if you're going to shoot IR do yourself the favor of using the best possible capture you have available and shoot RAW. 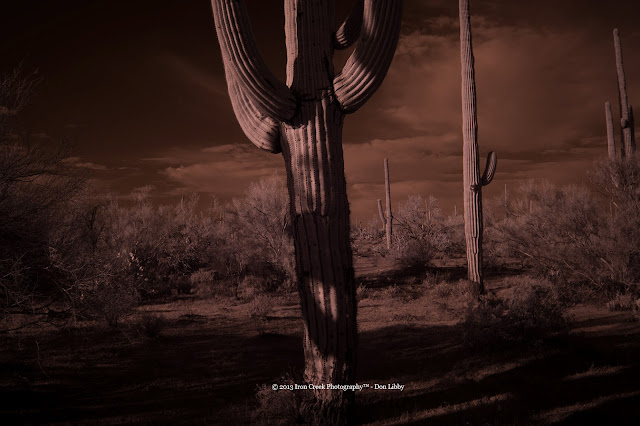 RAW file as seen in Photoshop 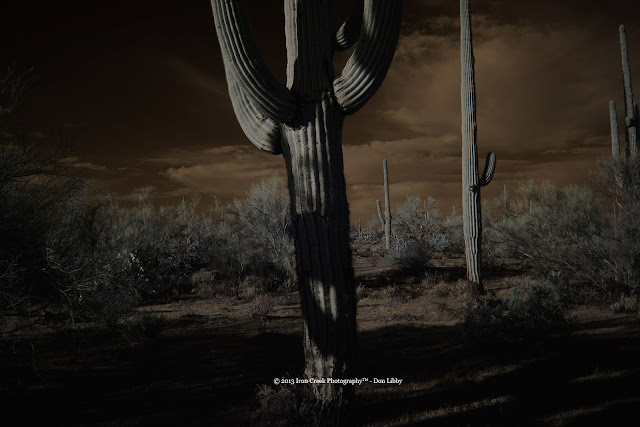 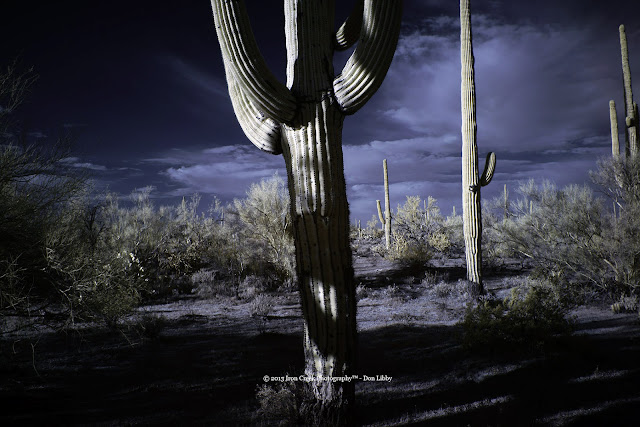 Entering Death Valley California
20mm (30mm) f/16 1/100 ISO100
Converted to black & white and cropped to suit
Lenses used:  The Nex7 came with what appears to be a good 18-55 "kit lens".  Normally I shy away from using any kit lens as they are routinely not the "best".  I did however use it on this outing; primarily to see what it would produce and to get a better feel for the camera.  I ordered the new Sony 20mm pancake while the conversion was taking place.  My thoughts were that it would make for an even smaller footprint (which it does) and with the crop factor of 1.5 it would keep me close at 30mm of what my widest lens on the Cambo and Phase One DF is.  (I've included the 35mm focal length as follows 20mm (30mm) or 18-55mm lens 18mm (27mm)). 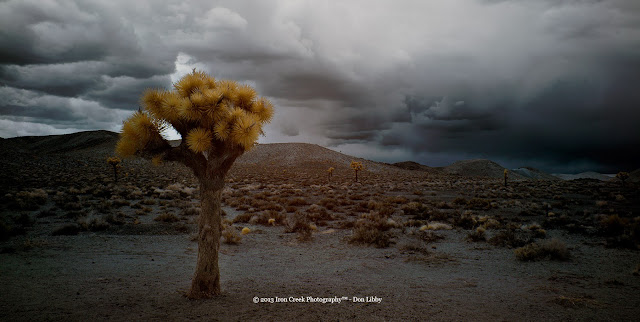 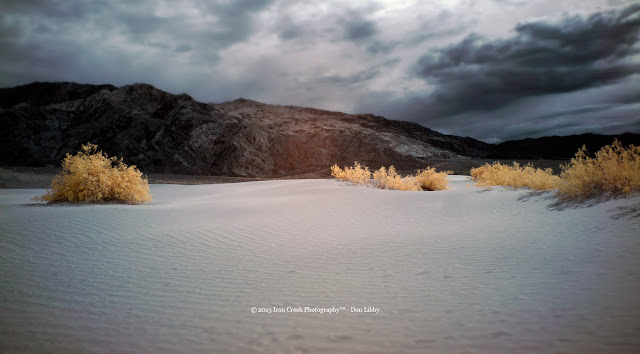 Death Valley, California
20mm (30mm) f/8 1/125 ISO 100
Color conversion, cropped to suit
﻿
As an end note to this section; I liked the way the Nex7 handled so well that I've since ordered another one to keep as a color camera.  Additionally I've ordered the newly released Zeiss 12mm and 32mm lenses to be used on either camera body. 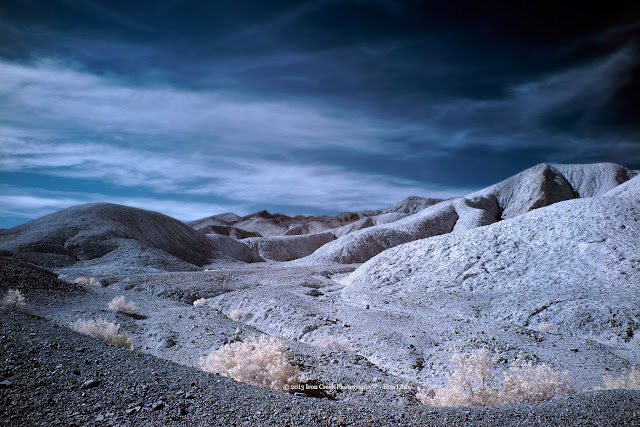 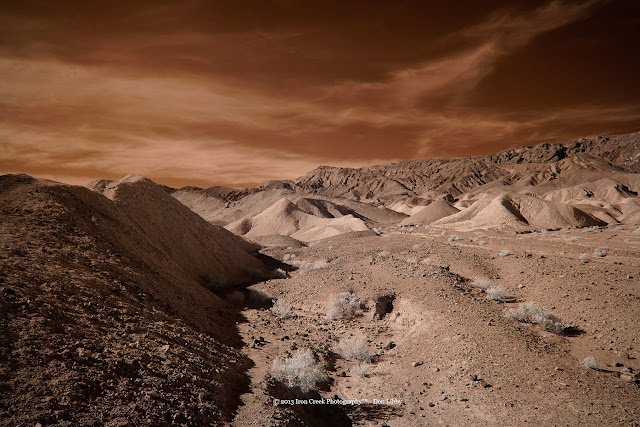 ﻿
20 Mule Team Canyon, Death Valley California
20mm (30mm) f/9 1/160 ISO 100
I decided I liked the coler better
I think I've included enough sample images to prove that the Sony Nex-7 is a great candidate for infrared conversion and with just a little bit of extra work you'll get great images either as they are, color converted or black & white. 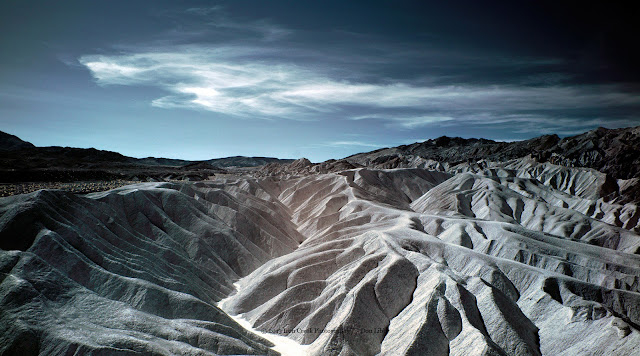 Zabrisike Point, Death Valley California
20mm (30mm) f/11 1/200 ISO 100
There's going to be more to this so stay tuned.  If you have any questions, comments or suggestion please feel free to contact me.
﻿ 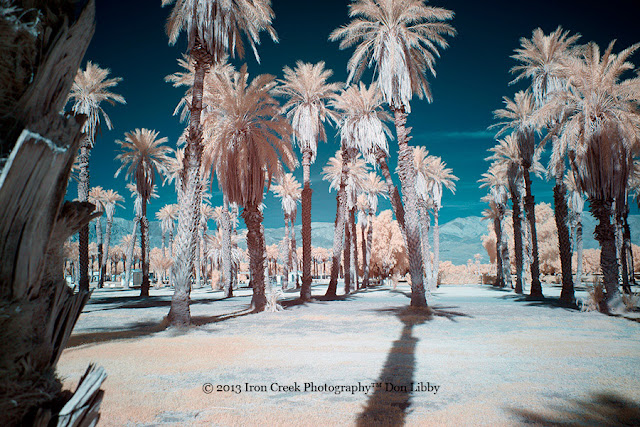 ﻿
Posted by ironcreekphotography at 10:52 AM