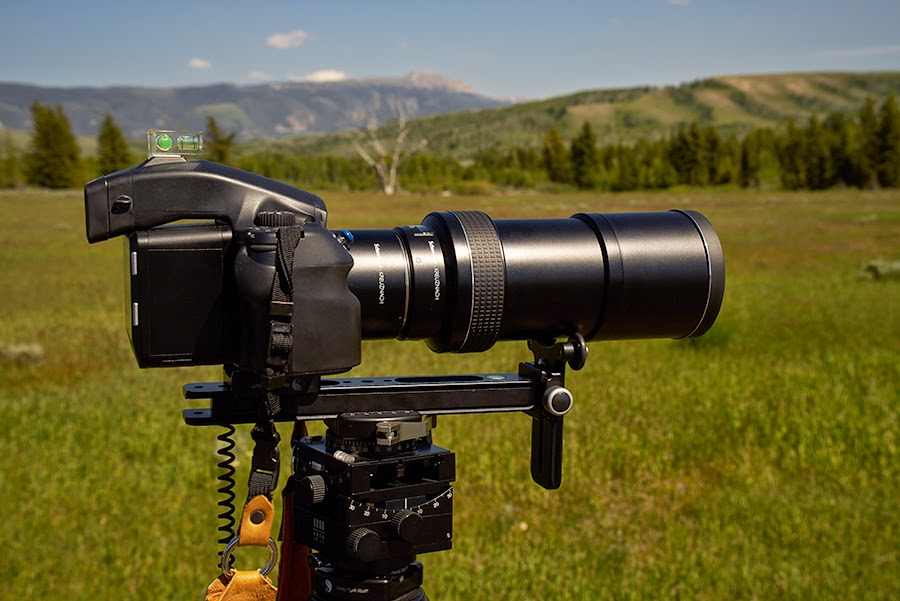 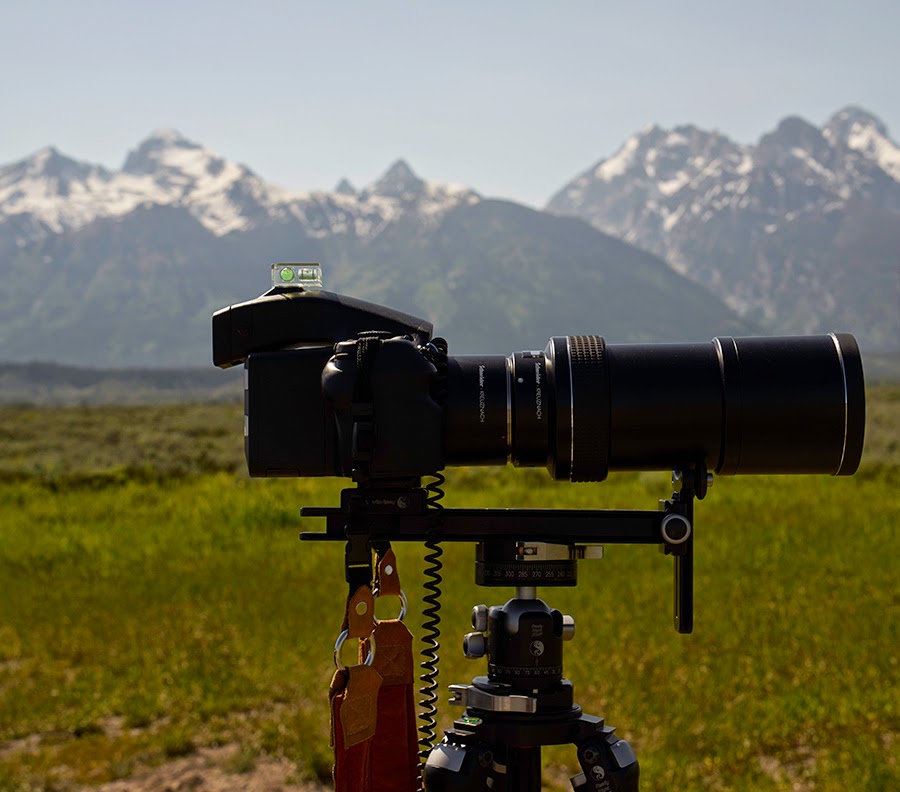 Attached to a RRS Ballhead 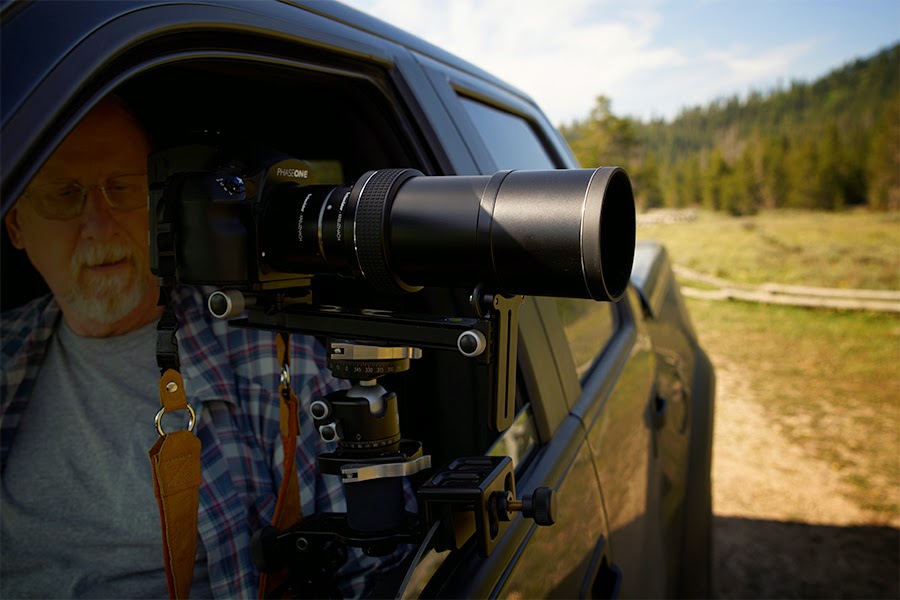 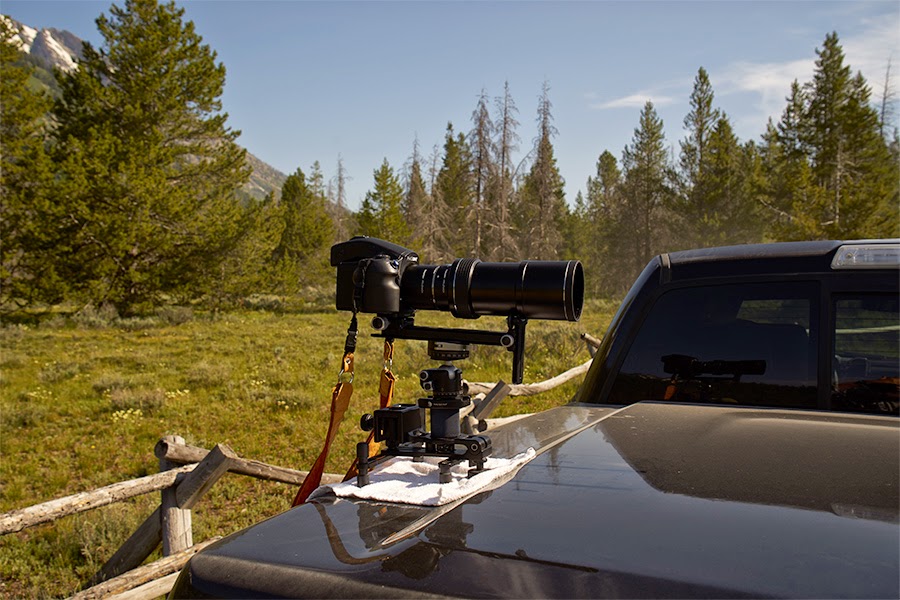 Kirk doubling as a truck pod 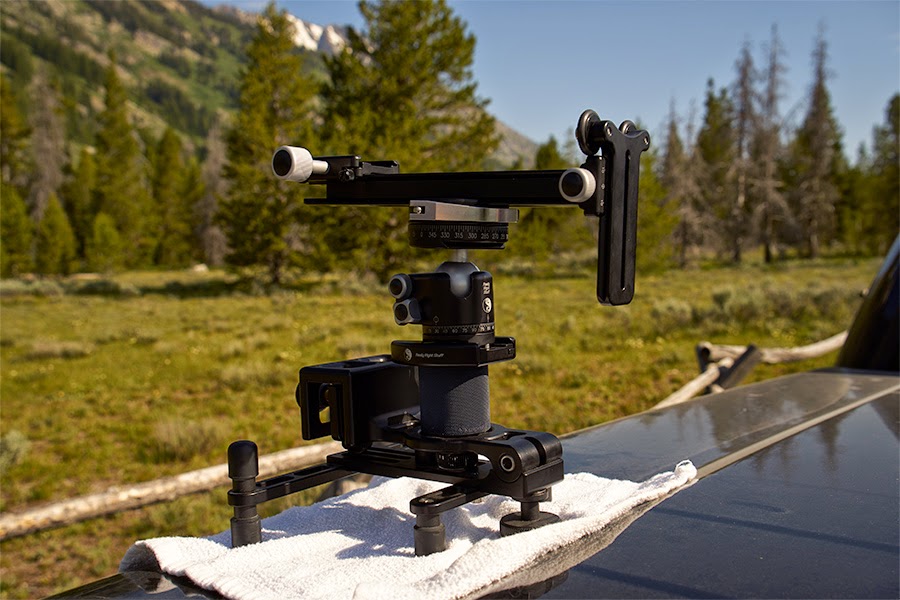 Showing the system without the camera
Last September I was at Lupine Meadows in the attempting to capture a bull elk as it was headed towards the mountains, was using my Phase One DF/IQ160 and an older Mamiya 300mm f/4.5 lens thinking how much better the images would be with the new Schneider 240LS and 2x converter.

Thanks to Dave Gallagher and Capture Integration, by December I had the opportunity to actually use the 240 and 2x and instantly fell in love with it despite what I believe is a huge error on the part of Schneider.  I found the 240 to be a super sharp lens and by itself quite easy to use either on tripod or handheld with autofocus easy and fast.  The downside to using a converter on this lens is you loose the ability to autofocus which in itself isn't a huge deal.  The huge error on part of Schneider in my opinion is the lack of a tripod mount on either the lens or the converter.  Schneider or Phase One - if you're listening; why would you omit this on a lens that is so long, so large, unbalanced that to achieve any useful image it must be supported on a tripod?  As it is, the camera is mounted to the tripod with close to 24" of very heavy lens sitting out in the front; it isn't well balanced and you're left with the need to maintain some type of contact with either the lens or the camera body.  Not something I'd recommend with a 480mm lens on any camera. 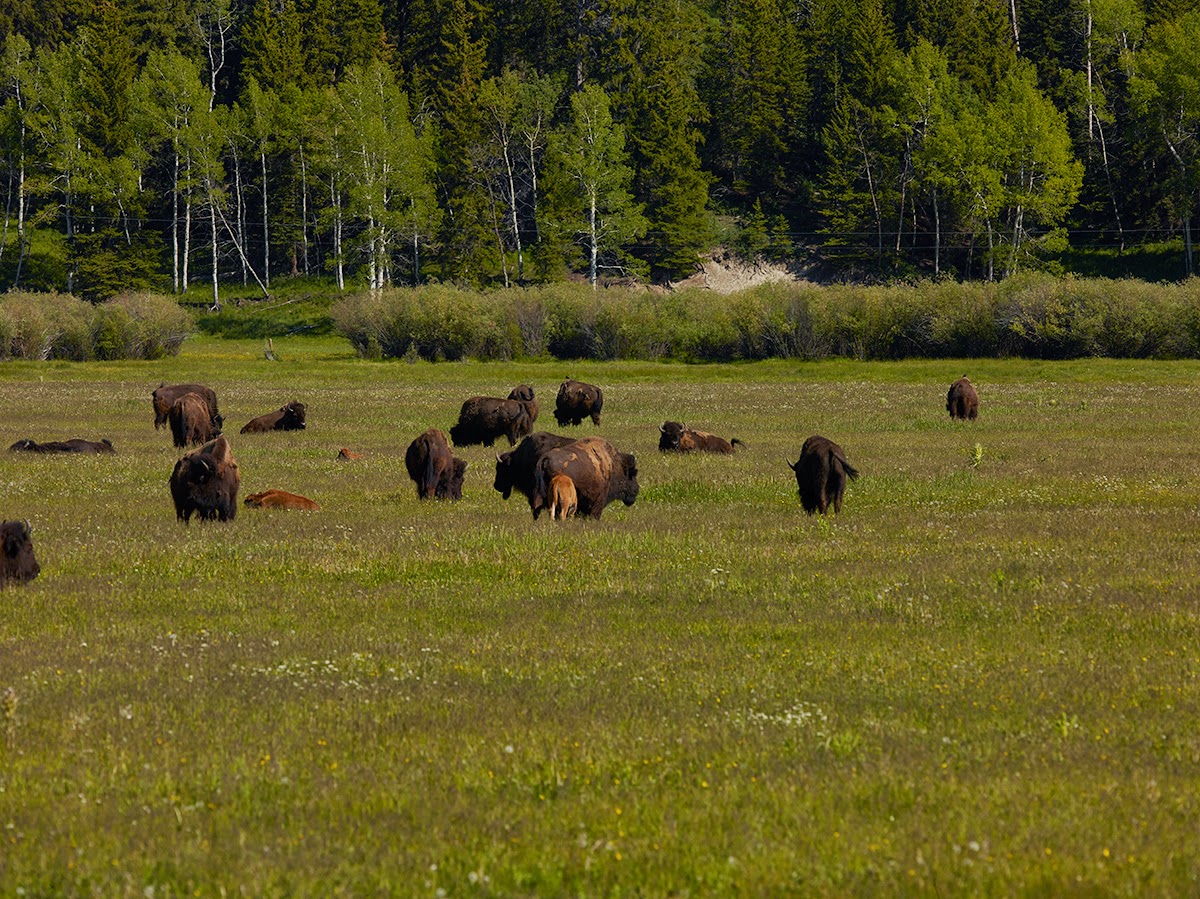 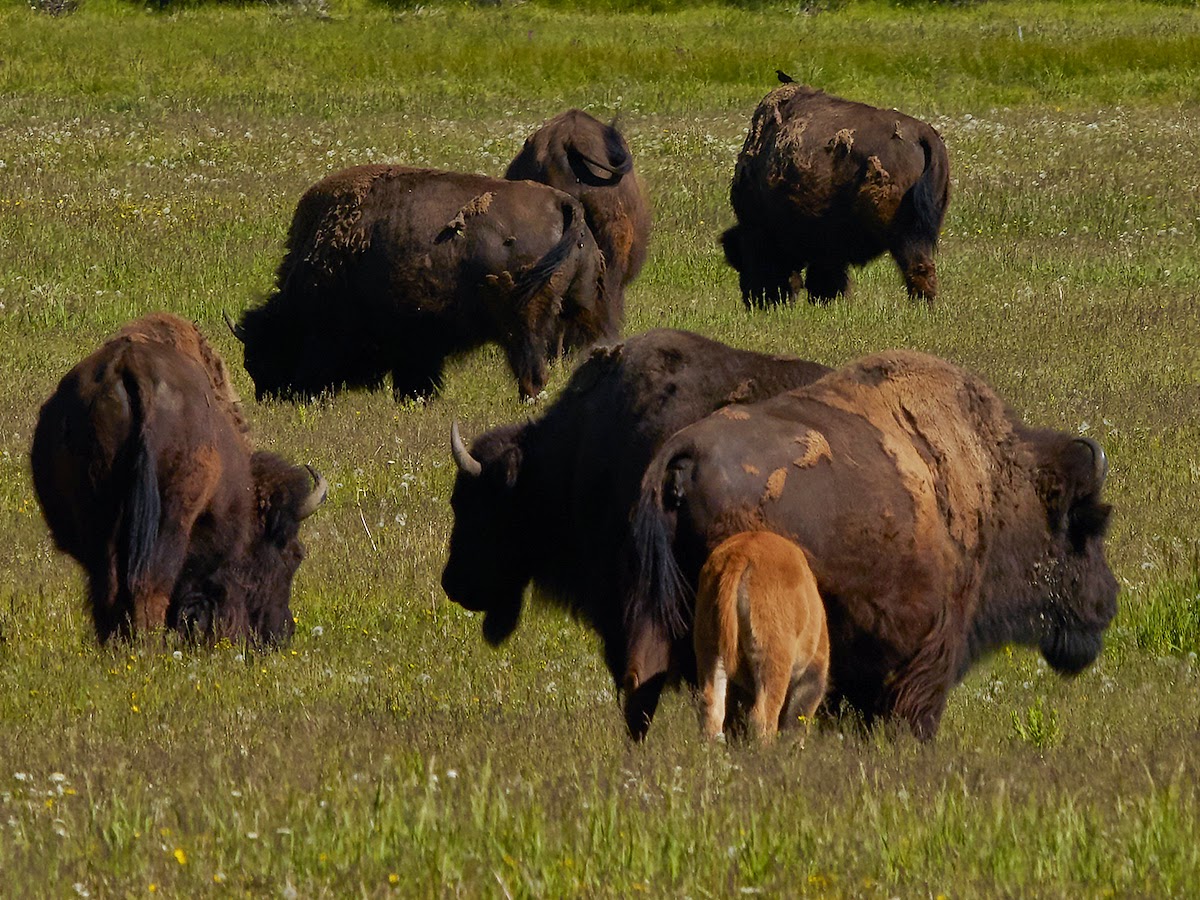 100% crop
To be fair, Phase or Schneider (don't remember which) shortly after the release of the combination also included a link to HejnarPhoto recommending them for their "Phase One/Mamiya 645DF+ Large Lens Rail".  Hejnar's package includes a 8" rail, F60 clamp, F26b clamp, plus a modular lens support bracket and miscellaneous screws.

I liked the 240 and the 2x converter so much I bought them both.  I continued using them into early January when we left Jackson Hole and returned to returning again to in March to capture landscape and wildlife.  Using the 240 by itself I was able to get close to 99% keepers; however with the 2x that was reduced to about 50%.  Fast forward to June when we returned to the   Being discouraged with 50% rate with the 2x converter I researched using a support system and found Really Right Stuff (RRS) also offered a lens support package.  Having been a long time customer of RRS, knowing their commitment to excellence made the decision easy.  Comparing the two packages I found the difference (on paper) is that the RRS rail is 2" longer.  Once it was delivered I found the rail to not only be 10" long it was also very thick which makes for a much better damping system. 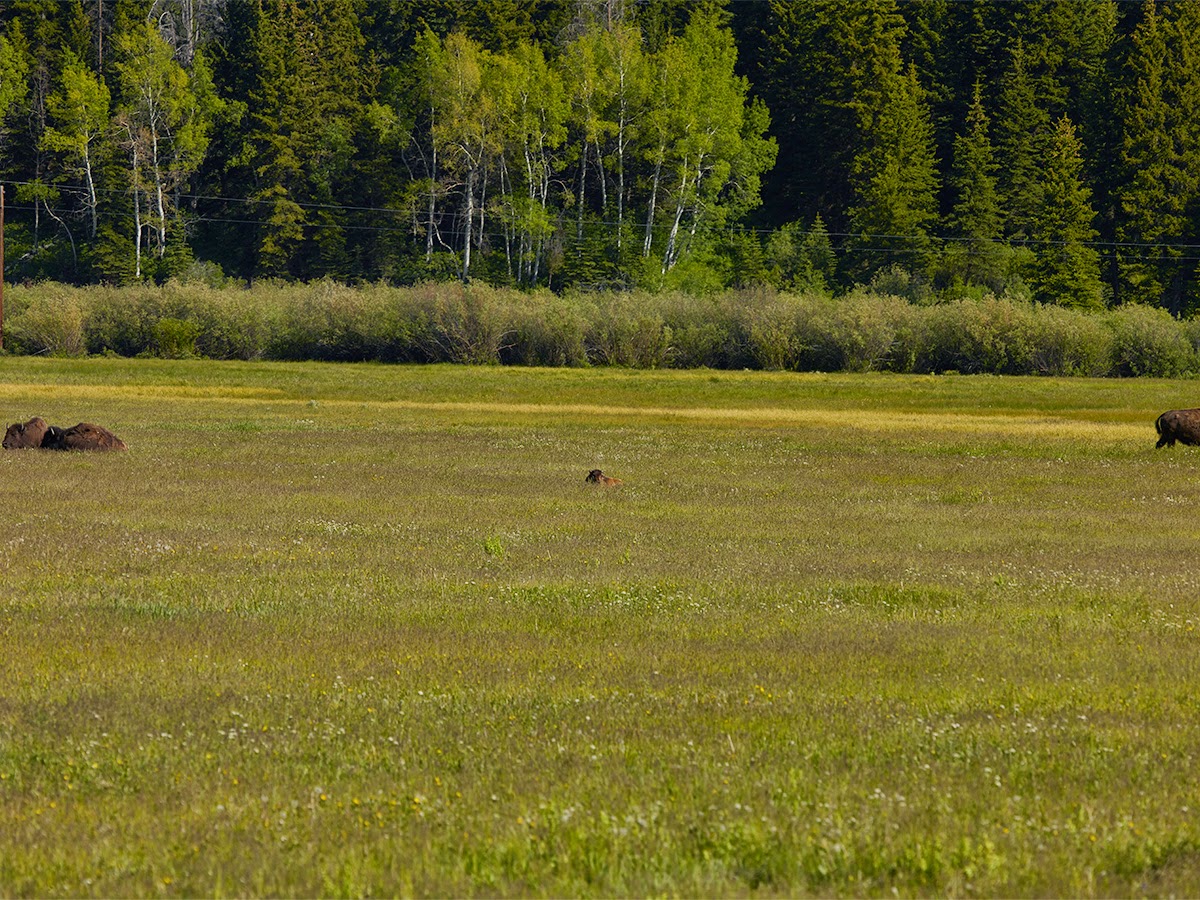 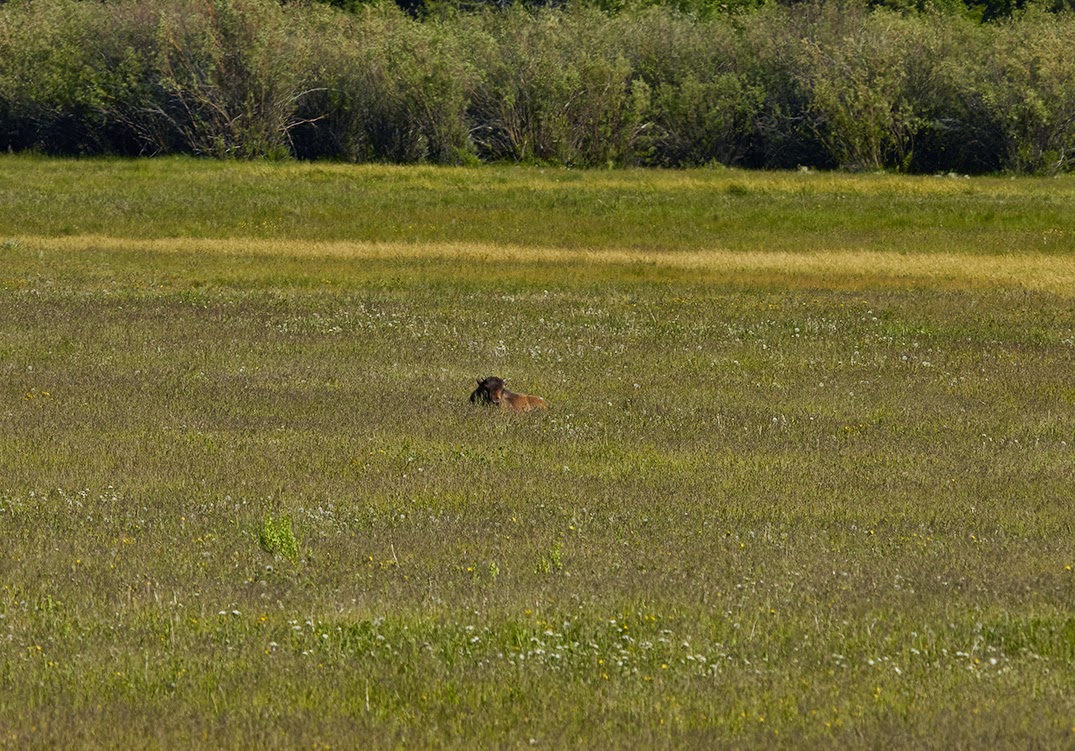 100% crop
I've now used the RRS lens support system several days using a combination of shooting techniques ranging from tripod (2-different heads) as well as a window mount which doubles as a ground pod.  I've also experimented using a monopod and believe it or not handheld.  As to be expected, the monopod gave excellent results and handheld is still heavy yet slightly more useable.

So let's talk about the images.... 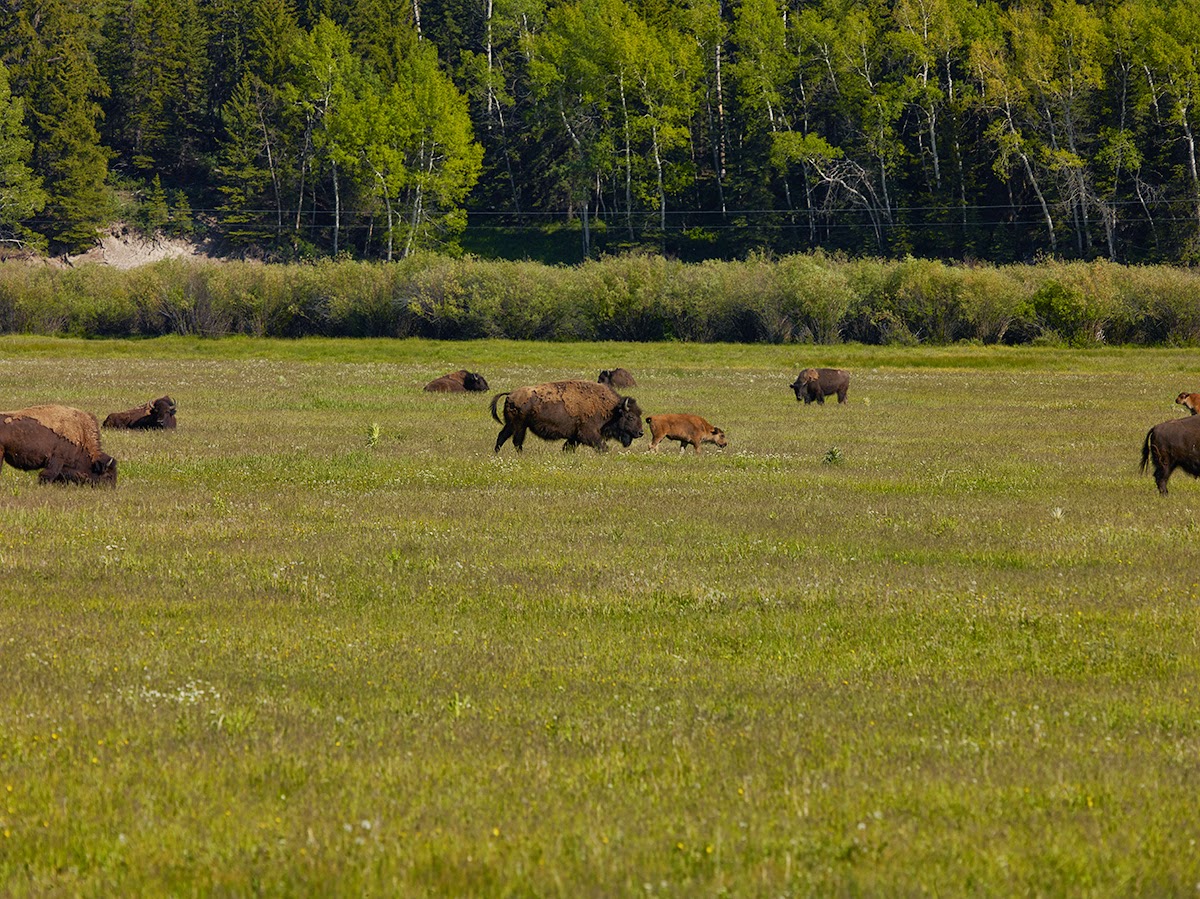 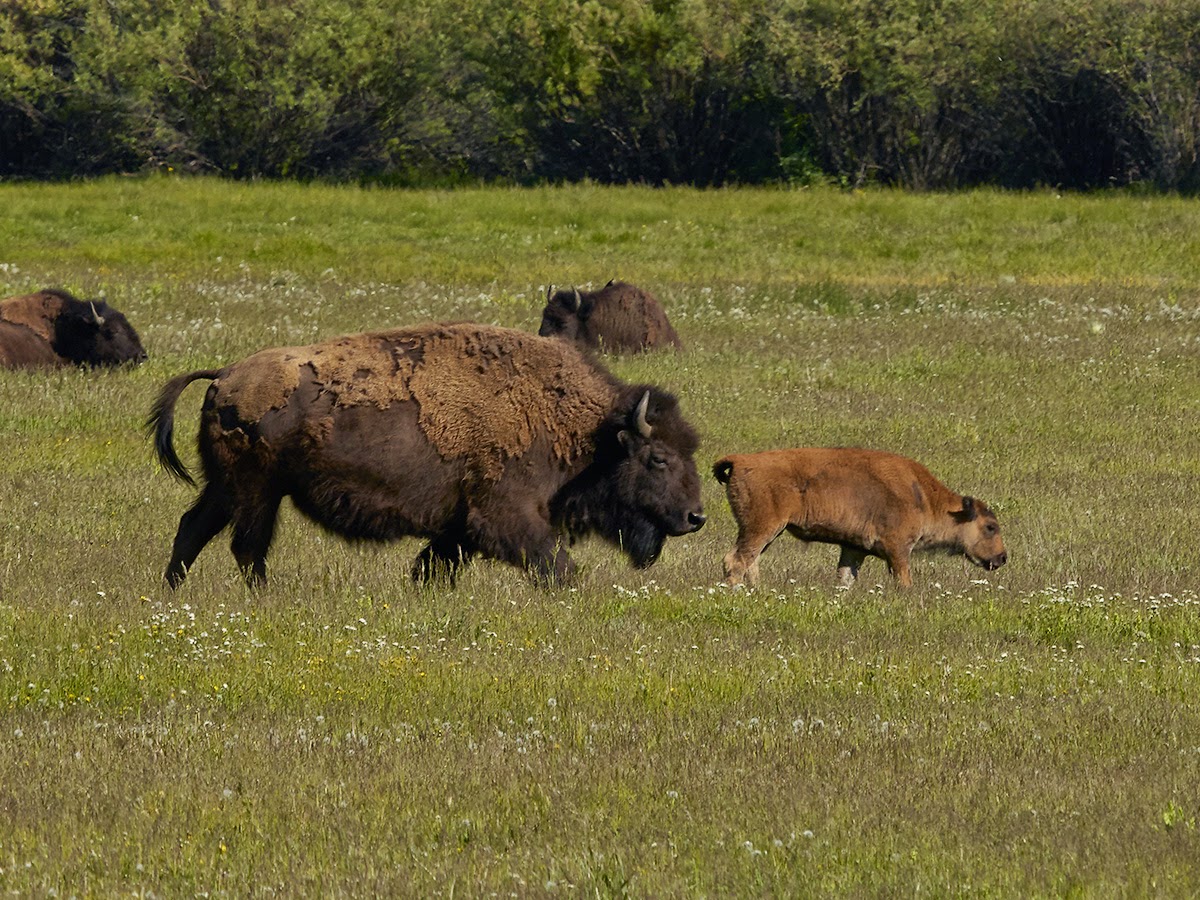 100% crop
All test images were previewed in Capture One Pro where the "Schneider Kreuznach LS 240mm (2x Tele) f/9.0" lens profile was applied.  The files were then saved as Tiff and opened in Photoshop CC where they underwent sharpening using the filter option of "Shake Reduction". All test images were shot either on tripod or Kirk window mount/truck pod using a combination of a Swiss Arca Cube and RRS Ballhead and a cable release.  Images of the lens support were all captured using a Sony A7r.

The test images were saved full frame and a 100% crop in order to offer a comparison. 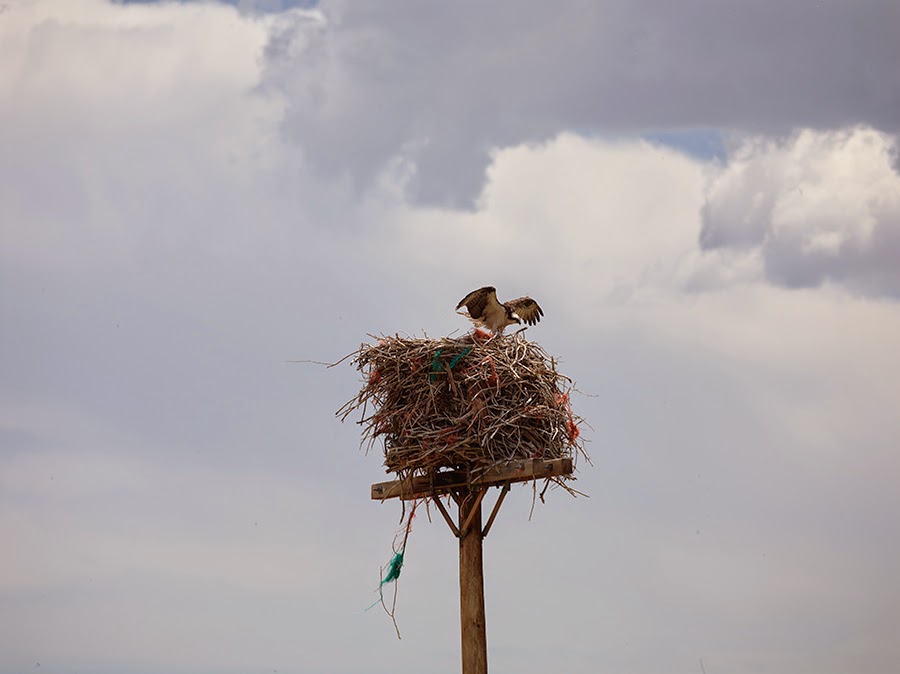 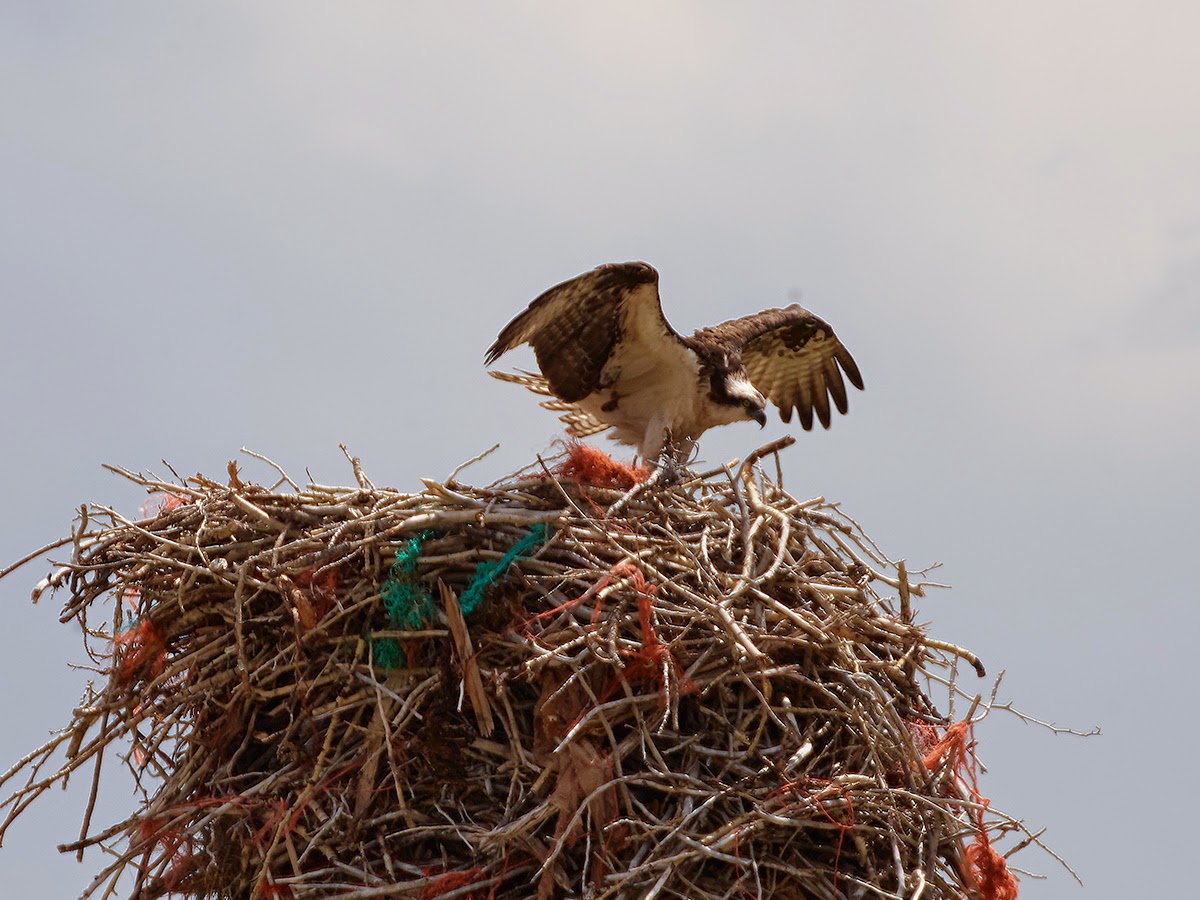 What's the bottom line?  The Schneider 240LS is a lens one should consider both for landscape and wildlife; as is the 2x teleconverter.  Be prepared to use a support system from either RRS or Hejnar (I can fully recommend RRS from experience but in the end it'll be up to you).  I have no buyer's remorse buying the lens or converter.  I also appreciate the addition of the lens support as it dramatically improves the balance while adding little overall weight. 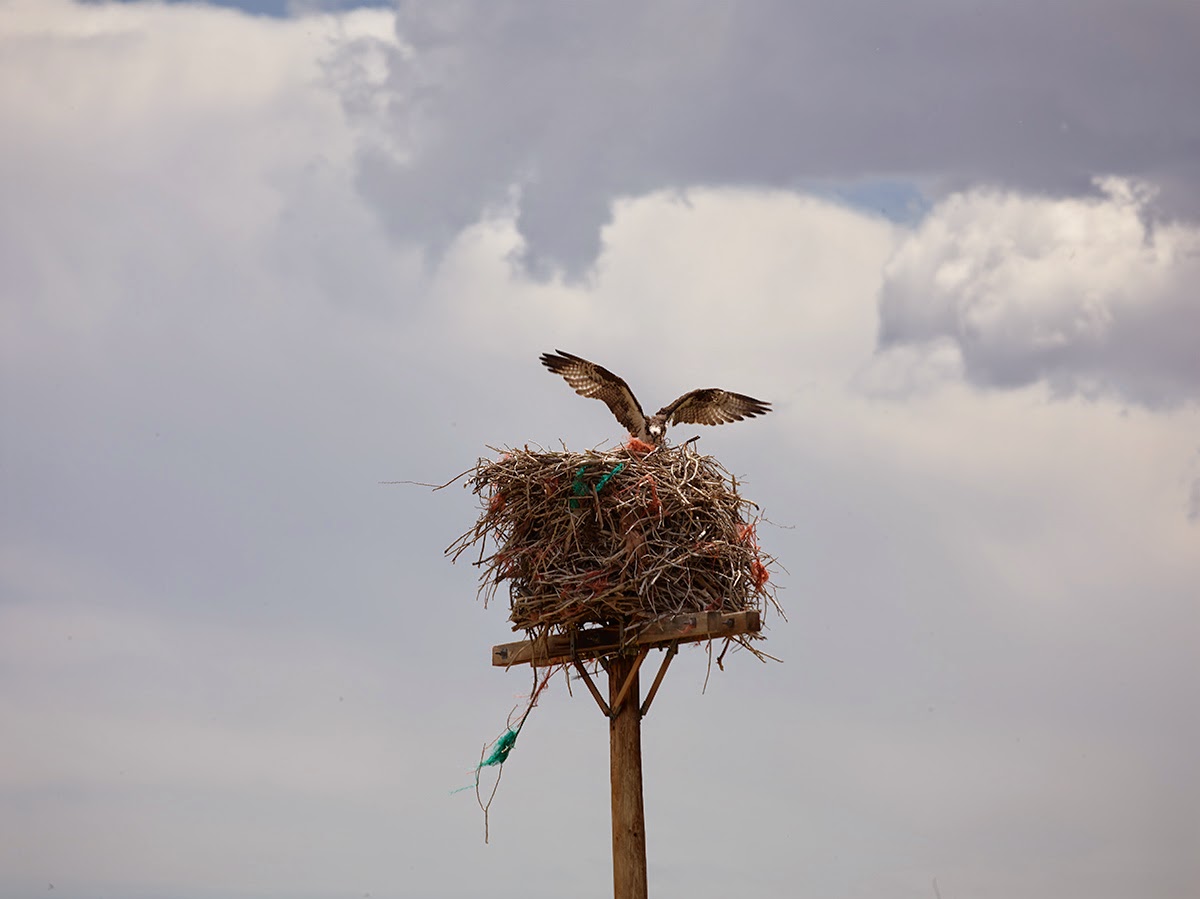 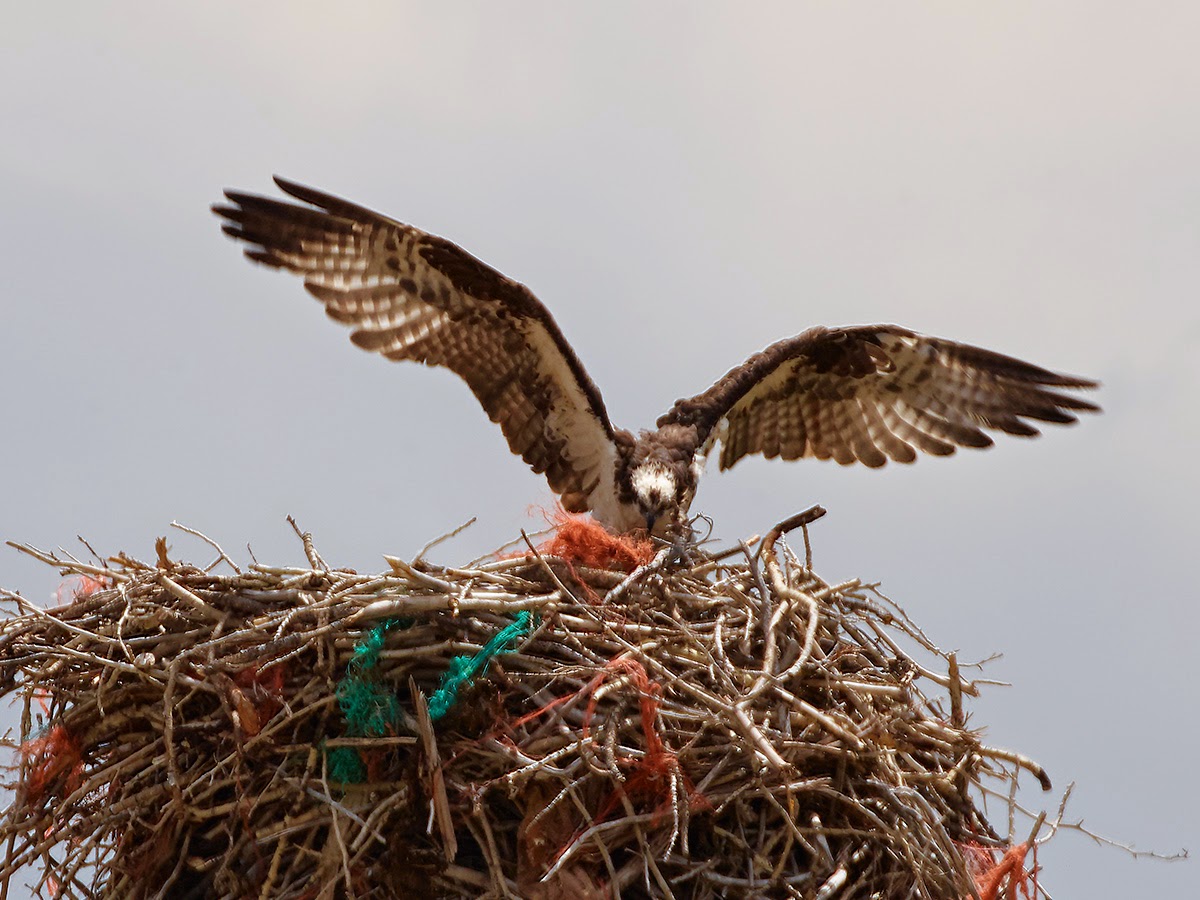 100% crop
Due to the distance of the Osprey I captured these using mirror up function waiting for movement.
Hope this helps anyone who is thinking of the 240 or the 2x.
Don
Posted by ironcreekphotography at 6:45 AM