A short time ago a good friend of mine Ken Doo wrote an extensive review of the T5 on his blog titled, “The KPS T5 Geared Ballhead: In Search of the Elusive White Unicorn”  I suggest that you read this at some point. 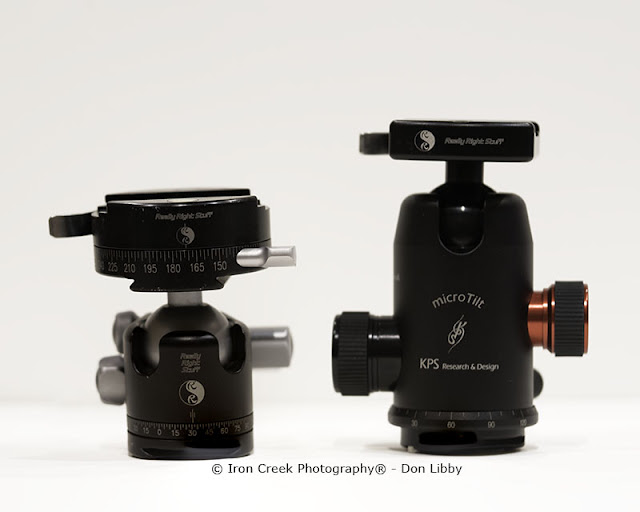 
Up until several months ago I had been shooting the majority of my landscape work with a technical camera; one that demanded precision in every aspect of setting.  During this same period I used an Arca Swiss Cube with great results.  The Cube allows for quick, easy and precise adjustments with a load capacity of 85 lbs. (38.5 kg)  The only downside was the weight and physical size.


One other downside to the Cube is that due to its form, I used it primarily for landscape and nature; while it could be used for wildlife in a pinch you’re much better off with a ballhead. I quickly ordered a geared Arca-Swiss d4 shortly after it was released thinking that it would be a great companion head to the Cube that would allow me the quickness of a ballhead and geared movement of the Cube.  Sadly it didn’t work out for me and I quickly sold it. The d4 was replaced with a Really Right Stuff BH-40 Ballhead having a load capacity of 18 lbs.(8 kg) that has remained my principal ballhead for any quick movement photography.


I ended up selling the Cube shortly after I sold the technical camera and reverted to using the BH-40 for all my tripod work however I found I missed being able to set the level adjustments quickly and began rethinking a geared head for my Phase One XF.  Ken had attempted to get me interested in the KPS T5 last year at our annual workshop however at the time I was still using the tech camera and Cube and figured that if it wasn’t broke why fix it.  This was also before Phase One released the new and improved XF body which made me rethink my shooting gear.


I contacted Legio Aerium late last year in an attempt to try their T5 however I quickly found that they didn’t have any in stock and as a matter of fact the T5 was being tweaked for a new, updated design.  I was however informed that I would be able to try out the new design as soon as it became available; which is now.


The rest of this will be my initial thoughts of the T5.


I received the T5 yesterday and due to other commitments haven’t had a chance to really try it outside of the studio.  That said, I like it.  A lot.


I installed the RRS TH-DVTL-40 Round Dovetail Plate to the bottom of the T5.  This plate allows me to quickly attach a head to my tripod and something I have on all my tripods and bottom of all the heads.


After installing the plate I also installed a RRS B2-AS-II lever-release clamp on the top.


KPS offers a wide choice of ballhead setups and I chose the KPS T5 Geared Ballhead (without clamp) as I already had a RRS clamp that I’ve been using with great success.


The photo at the beginning shows a side by side comparison between the RRS BH40 and KPS T5 both of which are set up the way I will be using them.  The only thought is that I might also add a RRS PC-LR panning clamp as I’m use to that particular workflow.


Did I mention I like the T5?  Well in case you missed it I do.  It’s slightly taller than the BH-40 and weighs a couple ounces more with a load capacity 0f 88 lbs. (40 kg) however what it offers over a regular ballhead is immense. While I’m still getting used to it I see a vast improvement of leveling over a regular ballhead.  Trying to get a precise level with a regular ballhead can take 2-hands (one to hang on to the camera while the other attempts to find a level without jerking the entire system) and several minutes.  The first time I placed the Phase One XF on the T5 I felt that it was very sturdy (the same as the BH-40) however the difference came in leveling.  I found the leveling aspect very similar to the Cube and achieved perfect level in seconds; plus I wasn’t worried the camera would fall over in the process. I see the T5 becoming my primary head as it more than satisfies the dual role of quick action ballhead and the precision needed in landscape.


This will become the first part of a multi-part blog regarding the KPS T5 as I’m heading to the Salton Sea area in a couple weeks which is where I’ll get a great chance to kick the tires and really try this ballhead out.


Did I mention I like it?  And yes, barring any unforeseen issues I plan on not sending it back and will in fact buy it.

Update:
I had thought that I would have to wait a couple of days to really put the T5 to a test however I found myself using it the day after I wrote the above.  I ended up shooting an interior and used the T5 with my Phase One XF.  Without any thought of what I was doing I set the camera up much as I would have when I still used the Cube.  Very simple and without any real effort.  It wasn't until an hour or so later that it dawned on me what I had done and just how easy it was.
The sign of a great piece of gear is the ability to use it with little to no concern and get the shoot.  Which I did.
You can guess the rest.  I ended up asking for an invoice which I promptly paid.  The T5 is now mine.  Yes, it's that good!﻿


Posted by ironcreekphotography at 12:00 PM