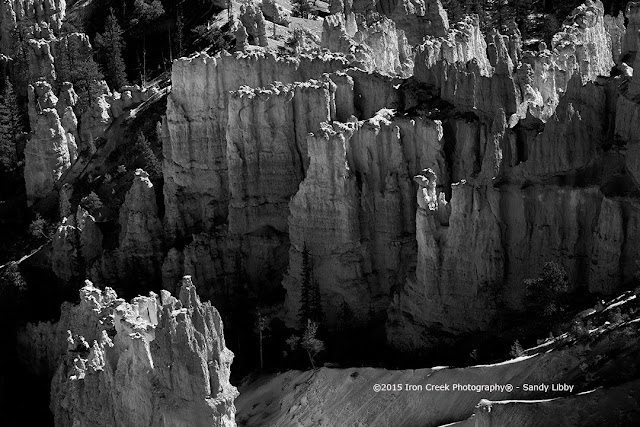 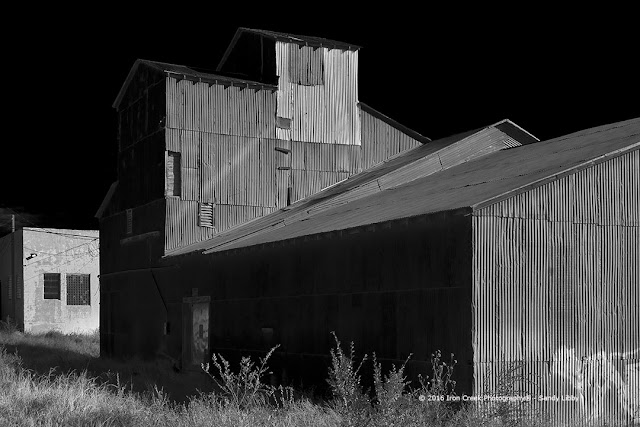 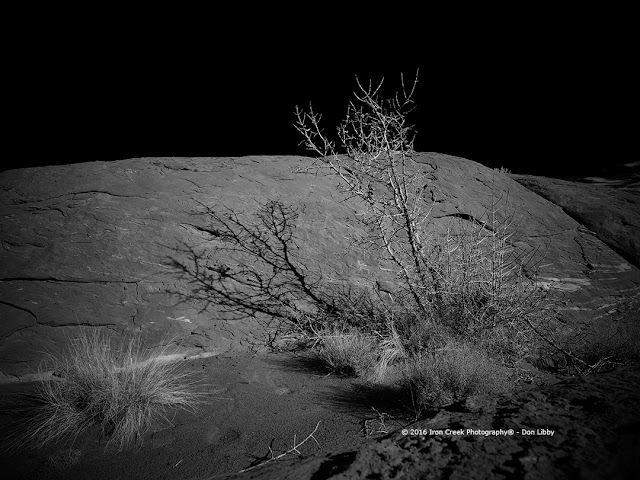 
All this of course was with 35mm cameras and once I bought my first medium format camera (Phase One P30+ digital back) I was then introduced to Capture One. The downside to Capture One in 2005 was that it didn’t support running on a 64-bit computer which I had at the time.  Any real work in Capture One didn’t begin until several years later when Capture One (owned by Phase One) began supporting 64-bit computers.


I’m now on my sixth Phase One digital back and felt it time to get better acquainted with Capture One.  The 10th version of Capture One (C1) was released late 2016.  I waited until after the first of the year to upgrade as I wanted to make certain most if not all the bugs had been worked out as well as being a tax decision.  C1-10 has better engines supporting 100-megapixels digital backs as well more support for other camera manufactures; and it runs faster.


So how does all this tie into black and white conversion?  My first step in getting better acquainted was to visit the Phase One web site and watching videos addressing C1.  These videos gave me the idea that there just might be a better way to convert to black and white than the way I had been doing it. My normal workflow was to go to the top of the screen to Adjustments pulling down Styles, opening Built in Styles and using either BW or Landscape BW1 or BW2. 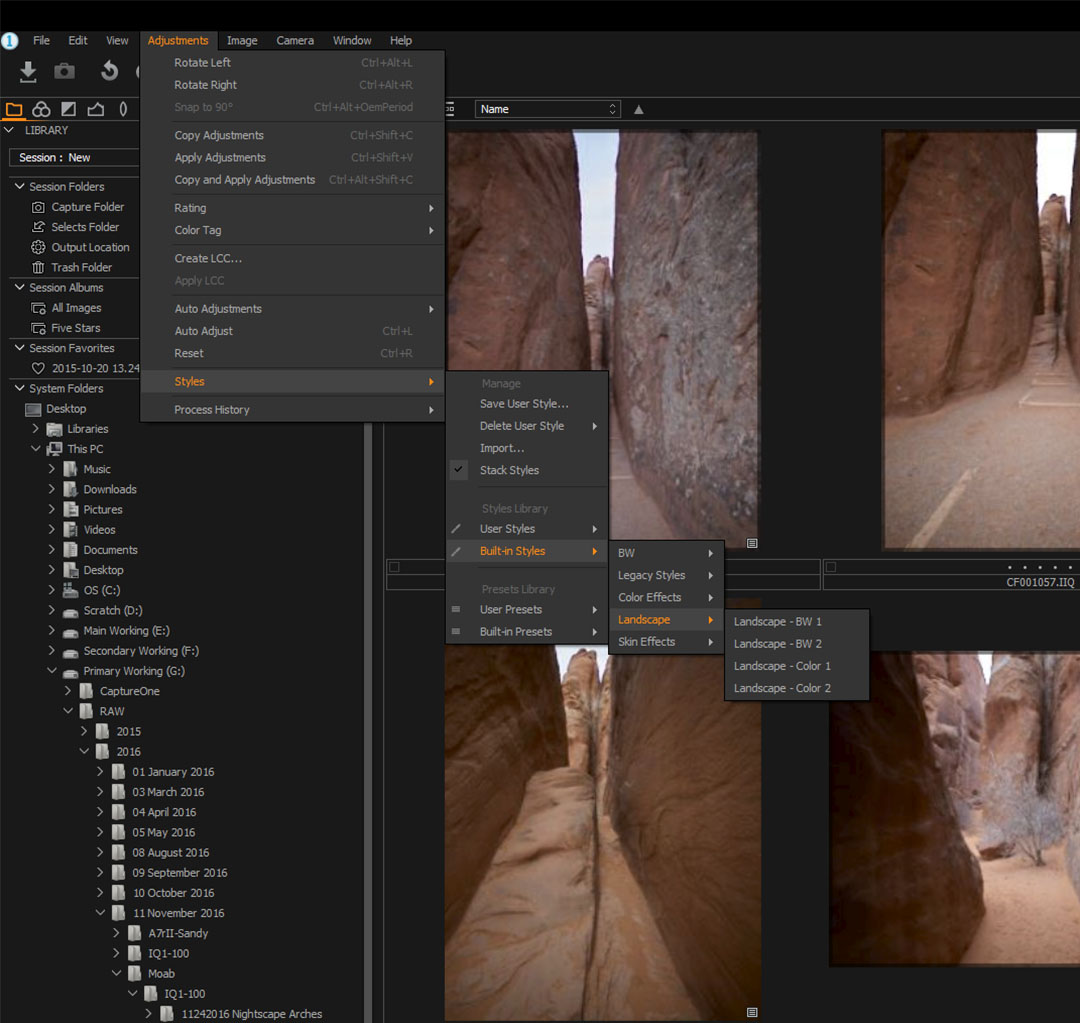 If you are still with me I’d like to walk you through the steps I’ve been using in C1. I use a dual monitor setup with the tools and thumbnails on the left and the preview on the right.  It goes without saying that both monitors are calibrated on a regular basis.

The workflow is time consuming however the end result is well worth it as you are in complete control of the process similar to a wet darkroom.


Several things are happening here.  The ICC Profile has been set, and a clone of the file made.  Black and white box checked and the various levels of Red, Yellow, Green, Cyan, Blue and Magenta set watching the image as you adjust them.  Finally, Color Balance using Shadow, Midtones and Highlight are adjusted using your preference. 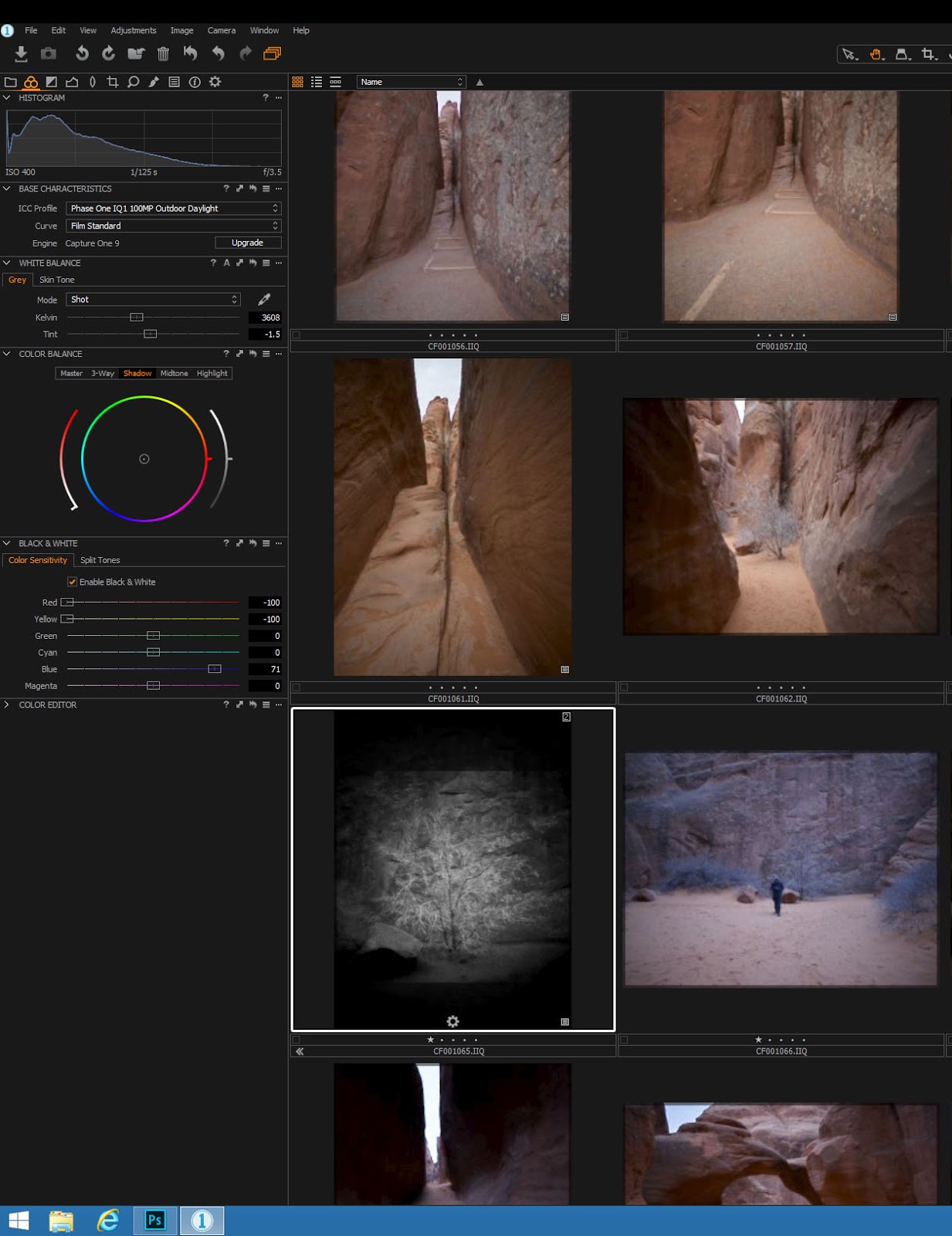 The next screen shows changes in exposure, levels, curve, clarity and vignetting.  Each section is tested to see the change in the image and if satisfactory are kept or returned to a neutral setting. 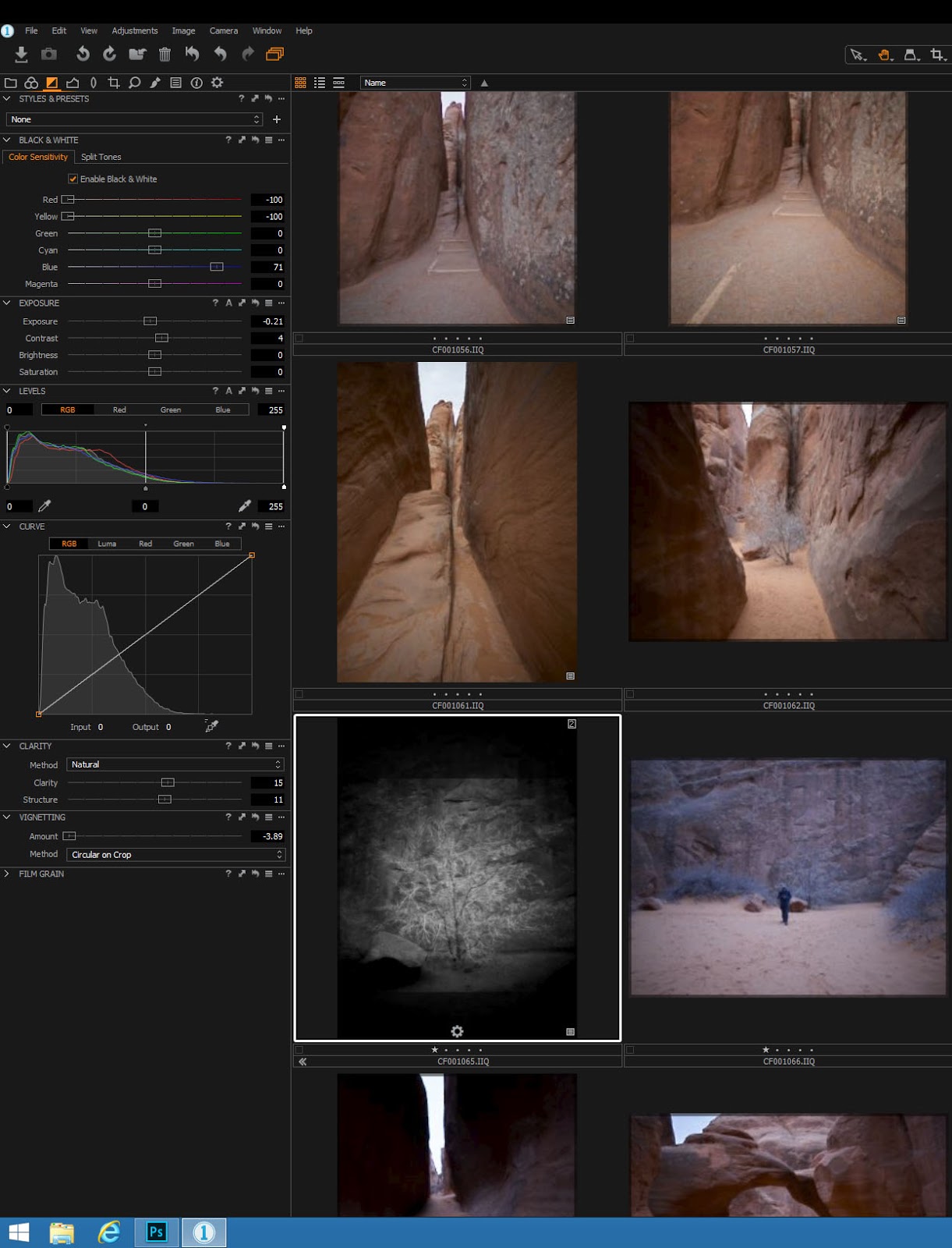 The original file prior to conversion. 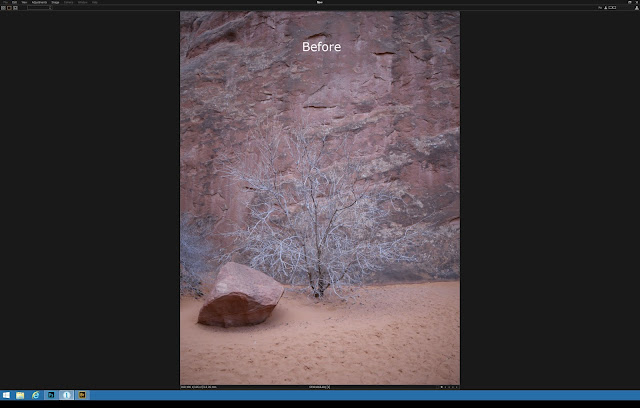 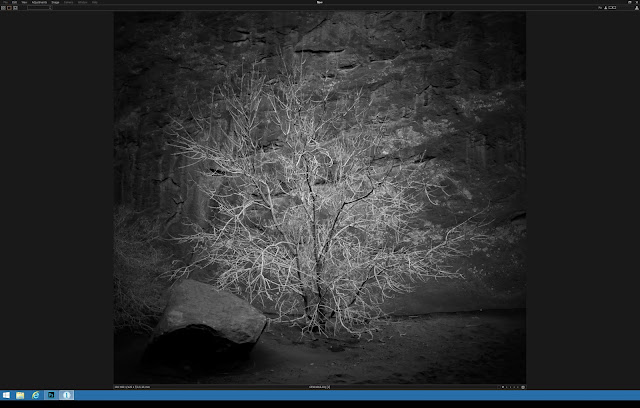 While the above is a simplified view of a medium format image what follows is a sample of a Sony A7rII using an image taken in Bryce Canyon, November 2015. 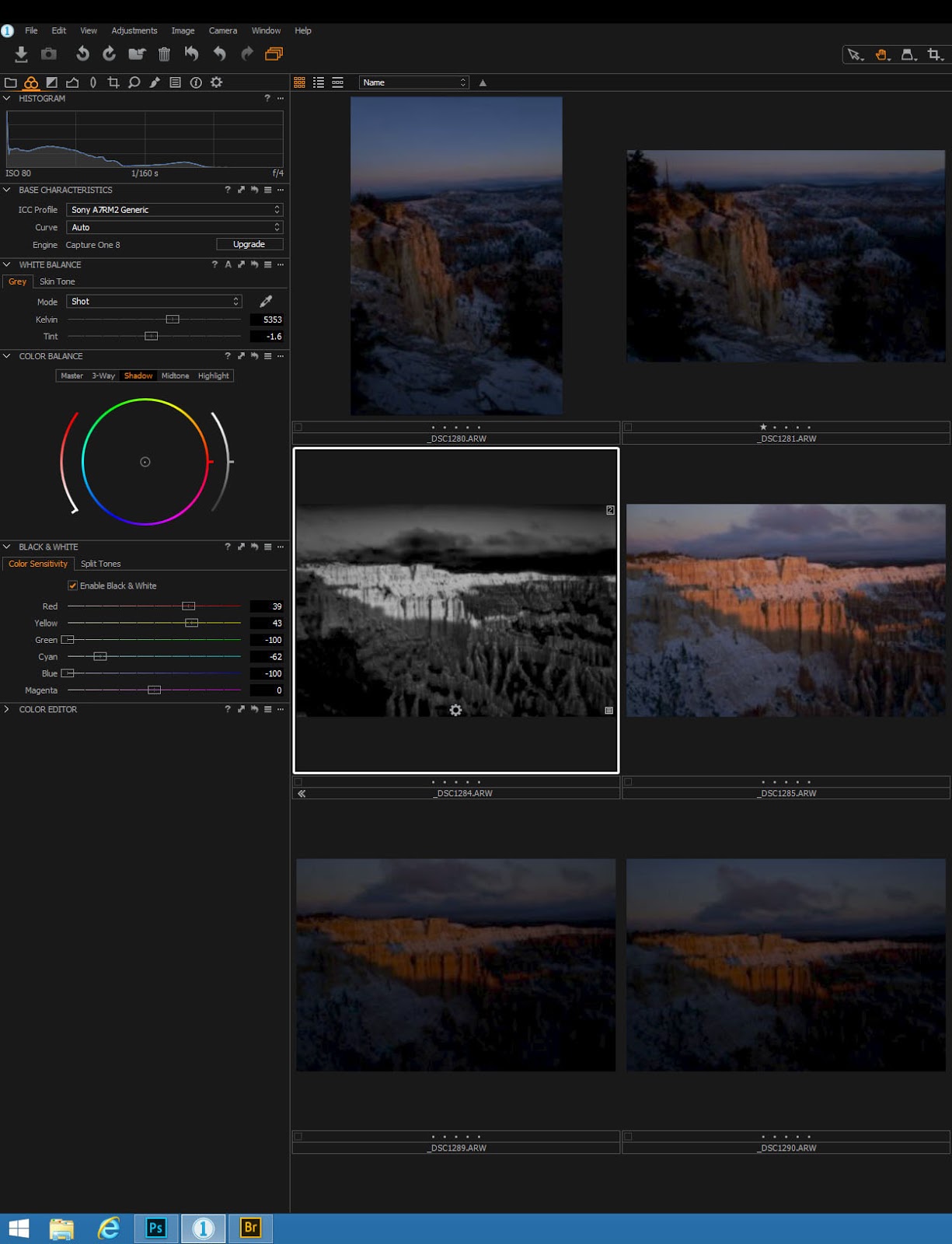 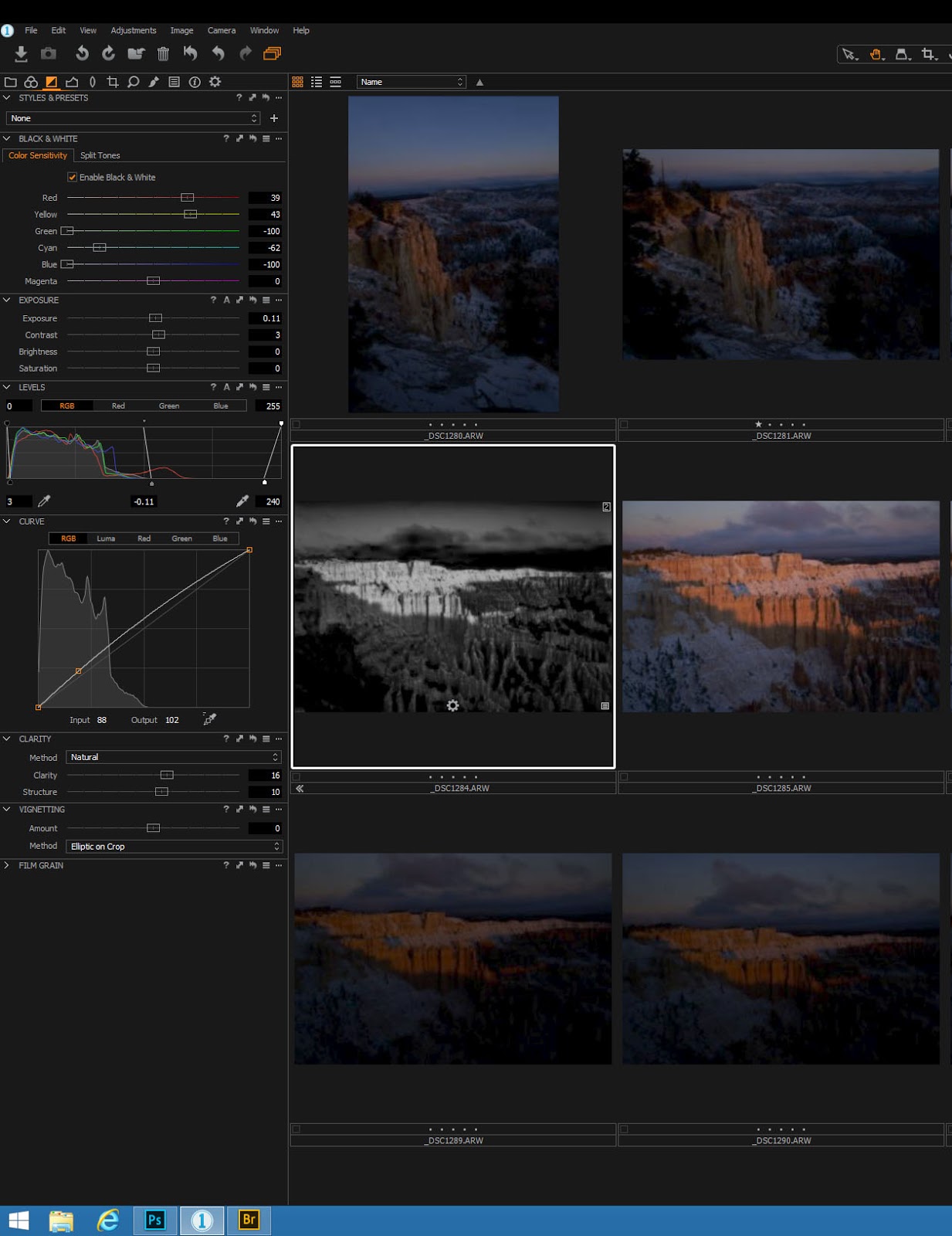 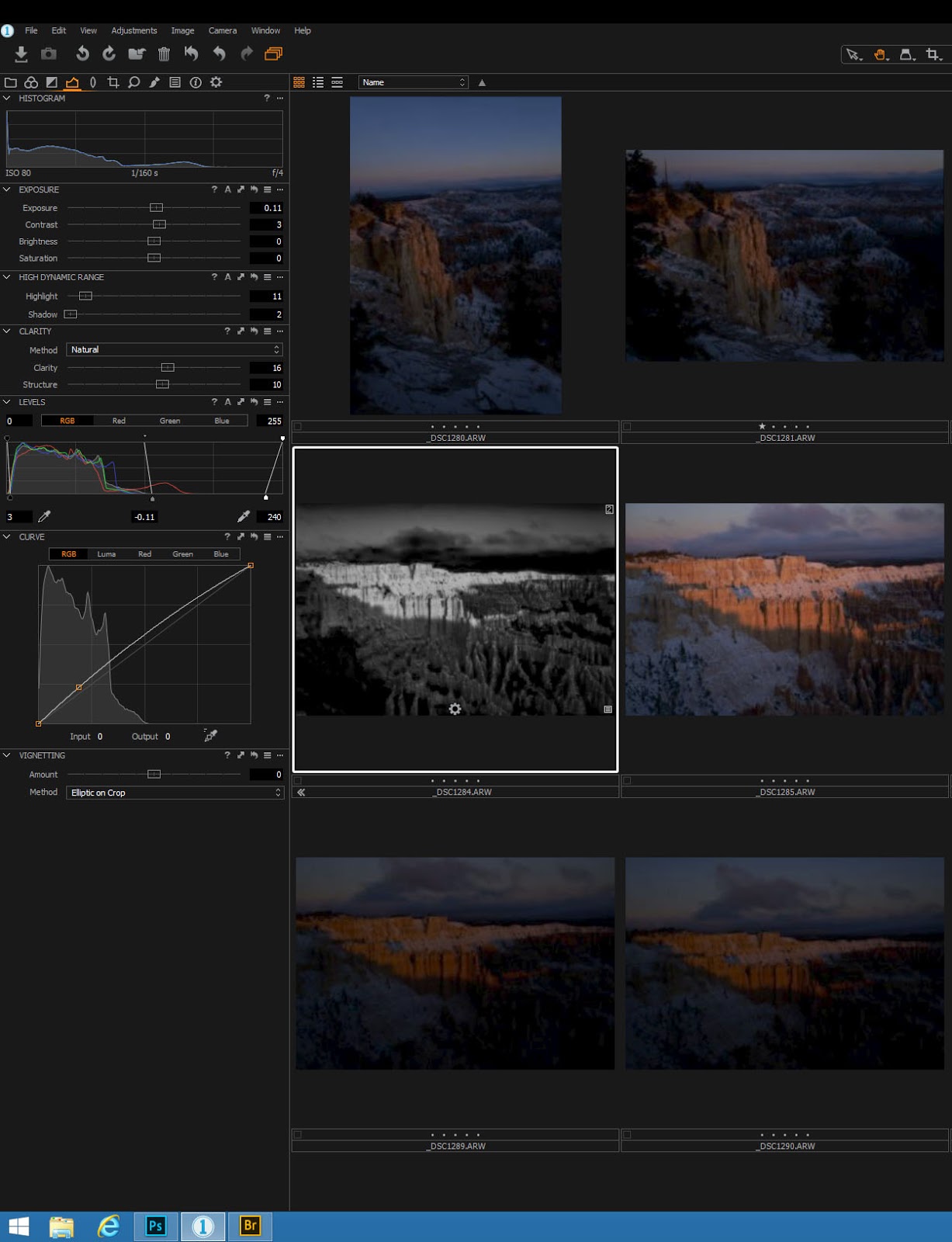 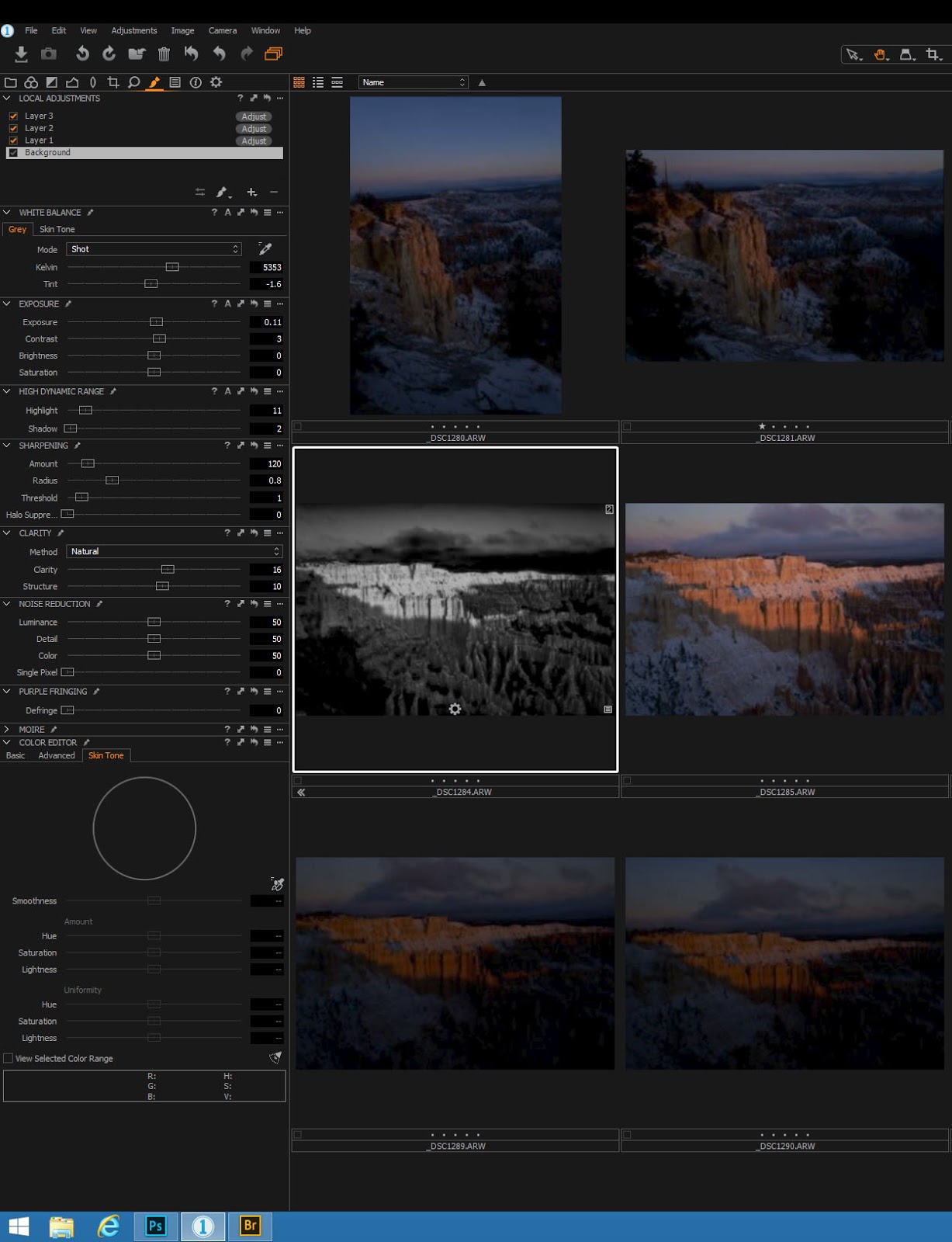 The last screen shot shows the use local adjustments in one case bringing up shadows and the other helping in highlights. 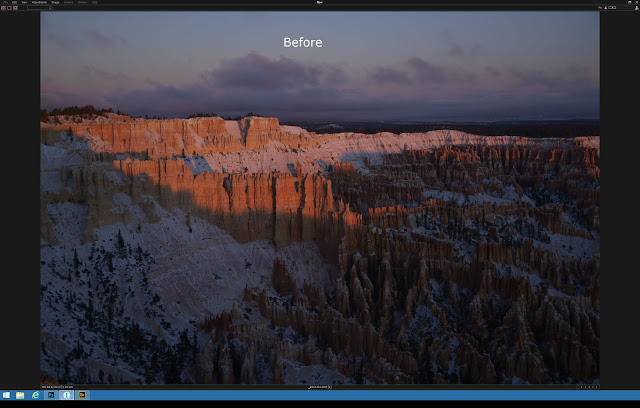 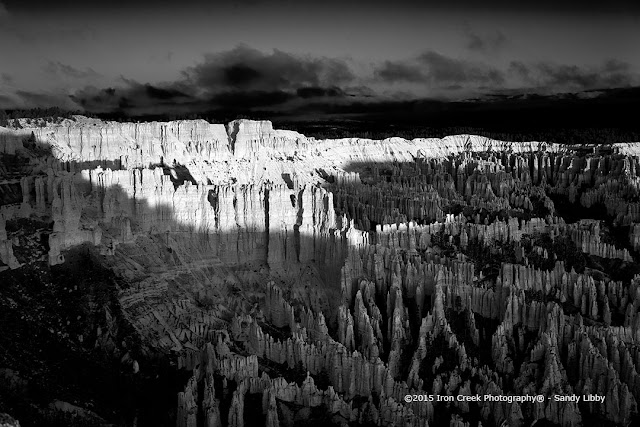 Here are more examples of the conversion using the above workflow… 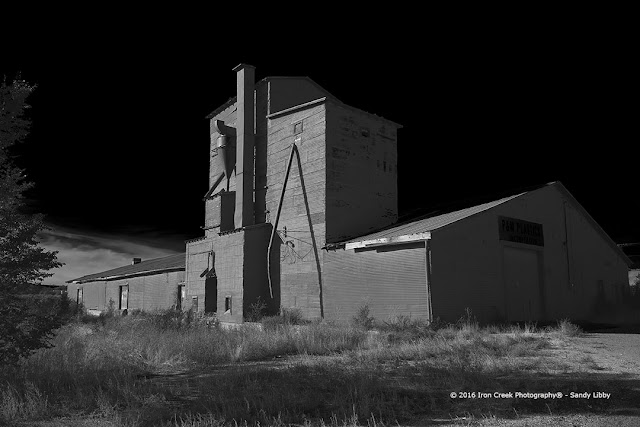 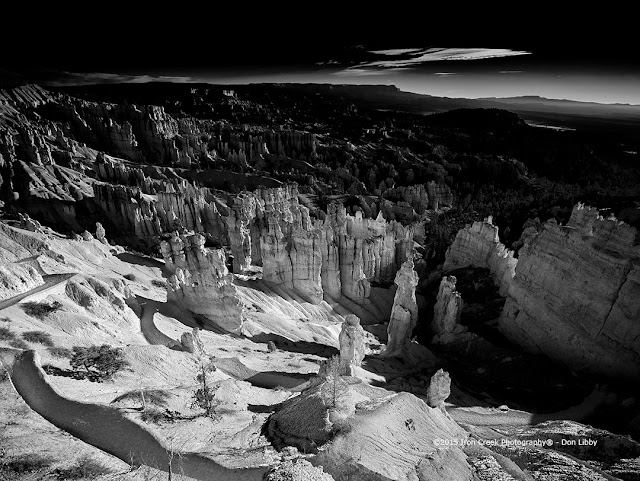 Bryce Canyon
28mm lens and an IQ180 digital back 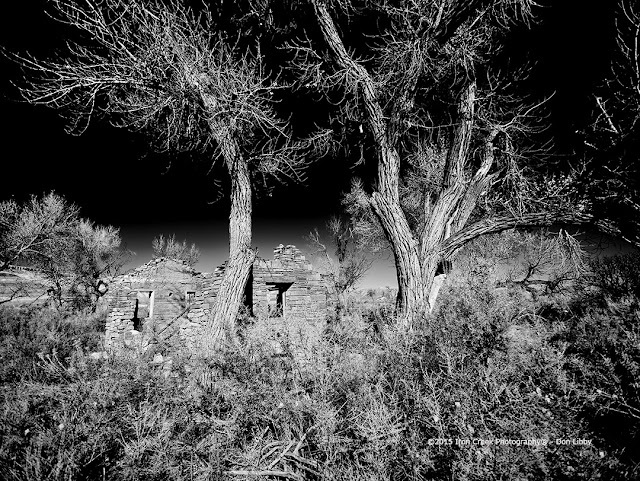 Old Utah Cabin
28mm lens and an IQ180 digital back 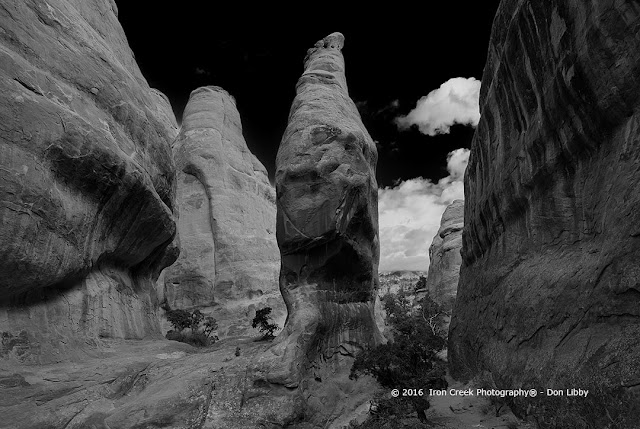 Devil's Garden Arches National Park
100-megapixel IQ1-100
The workflow I’ve outlined works for me as I find it better than a “one size fits all” solution found in either the Styles section of C1 or anything I’ve tried using Photoshop, Nik Silver Efex Pro or Topaz Labs.  While each file should be worked separately I have found that I can apply the same setting to another file that was shot the same day using the same exact settings thus making it slightly faster.
This barely skims the surface of what C1 can do and I highly recommend visiting Phase One to learn more about Capture One.  Please remember to use the AMBDON code at checkout to receive a 10% discount on either the full program (good for 3-computers) or an upgrade from a previous version.


Thank you once again for visiting and I hope you return throughout the coming year.  Please feel to comment or ask questions.