Using a MIOPS with a Fuji GFX50s

We’ve been photographing lightning for several years using different triggers; most worked but were bulky. We were about to replace our current trigger after Don had inadvertently fried the battery and decided to check the current assortment of triggers on the market.
MIOPS came on our radar recently due to water drop photography we've been doing and decided to dig into them a little to see what they have to offer. We started looking at just a replacement for the lightning trigger and liked what we saw with the MIOPS Smart. The Smart allows one to capture lightning as well as other things either as a stand-alone device or using a smartphone. Using the smartphone also opens up broader applications.
One of the first test images done shortly after setting up the MIOPS Splash. Using plain water in a dimly lighted kitchen. 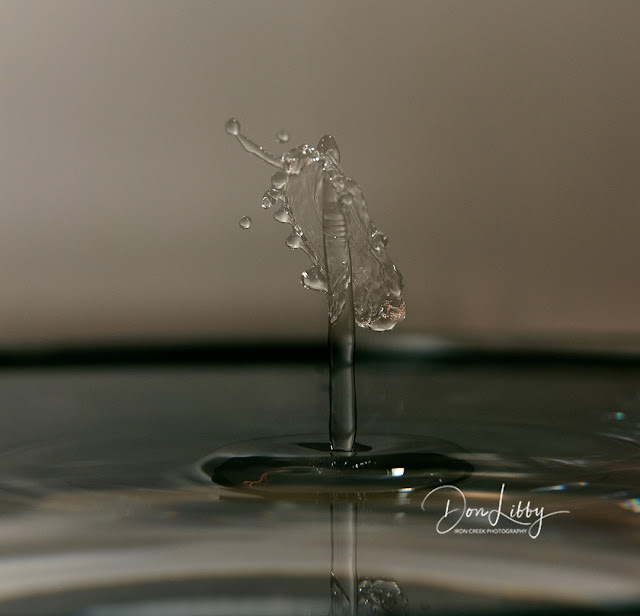 f/11 ISO 200
We now have the MIOPS Smart and have tested it using light to trigger the camera as well as sound and laser. The cool factor is that we can connect the Fuji GFX50s medium format camera without any issues. We’ve also found the operation either as a stand-alone or via the smartphone one of the easiest we’ve encountered.
We were so impressed with the Smart that we decided to order the MIOPS Splash. We felt we were testing our luck on this as we were very pleased with the system we had been using however we felt this might be slightly better. And we were correct. We found the setup easy and the footprint much smaller. We set up the Splash using a ground tripod in the kitchen. The kitchen while convenient is not the best place to capture water drops due to the light in the room. Knowing the drawbacks of the location we decided to go ahead with the testing. In short, we were impressed.
Like the Smart, the Splash talks to the smartphone via WIFI. Don installed the battery in the Splash, turned it on and the phone instantly recognized the connection. We found this the same as when we first connected to the Smart.


Pleased with the initial test images we decided to add a little color. 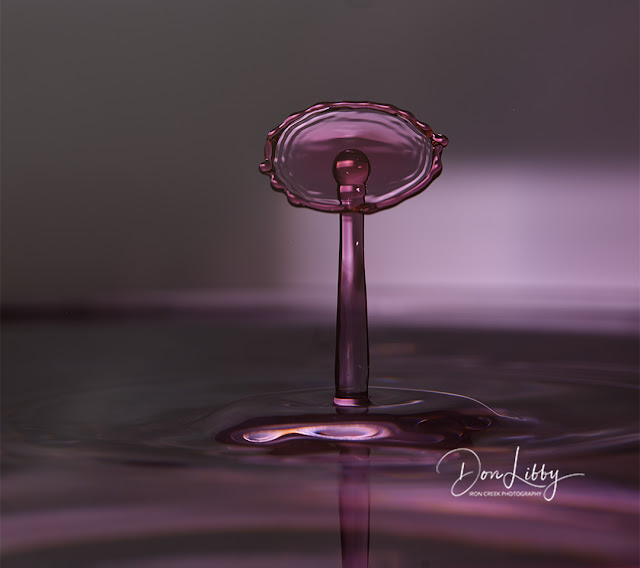 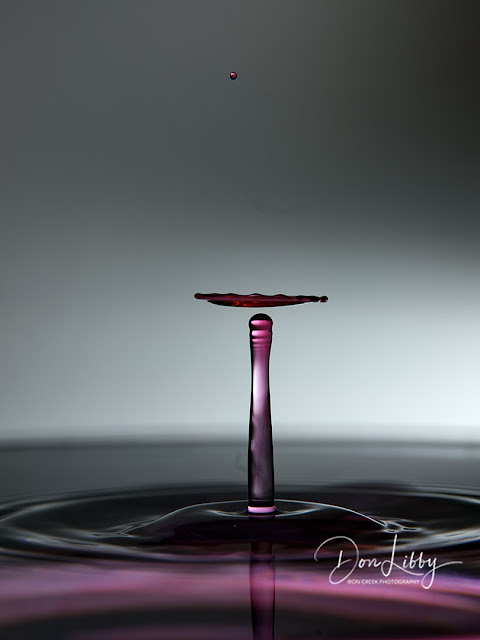 f/11 ISO 100
Now the slightly bad news. We use 3-Nissin Digital Di700A flash units to capture water drops. No big deal. The Splash like the Smart has one 3.5mm connection port for the flash. The units came with a 3.5 mm to PC Sync cable. The issue is the sync connection is too loose to give a proper connection to any of the flashes which meant we needed to use a combination of tape and rubber bands to keep the connection. All isn’t lost as we've ordered a new set of cables to try; we’ll also be trying a 3.5mm cable to the 3.5mm port on the flash.
This is a shot of the setup taken the second day inside the garage; notice the fancy tape and rubber band...

We found that connecting a flash to the Splash worked (with the tape and rubber bands) and setting that flash as the master and the other 2-flashes as slaves. We shot around 150 files during  testing and found the flashes worked well.
There is little to no information found on the web as to settings or height of the drop. Most of this is trial and error. We decided on dropping at a height of between 8 and 9 inches into a device about 5 inches deep. We were immediately pleased with results. We kept the drop size at 50ms and experimented with the delay in between the drops as well as the flash delay.  In all the cases We kept the camera on bulb, triggering the camera then the Splash using a combination of remote shutter release and smartphone.
More samples from the first day of shooting... 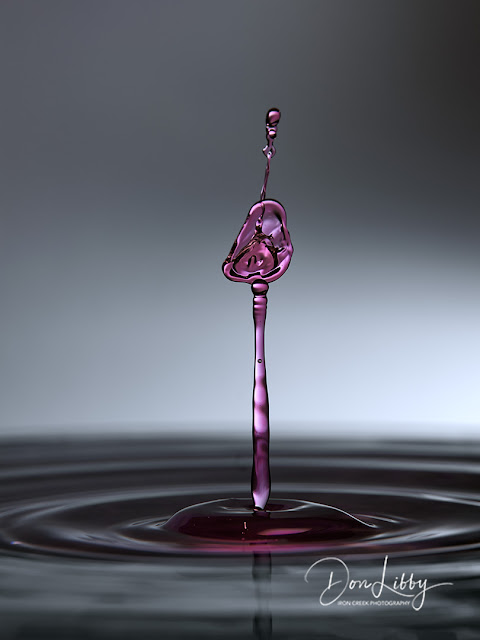 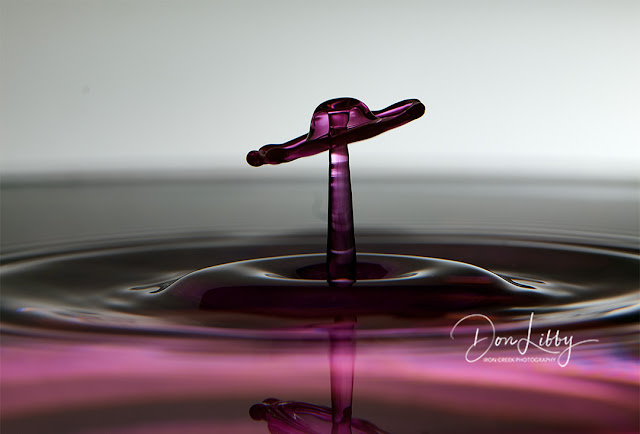 f/11 ISO 100
We began writing this shortly after receiving the Splash and began testing it. Since then we took it to our garage where we normally shoot water drops. The reason to relocate is that the garage is much darker and we are use to shooting there.  We also used a slightly smaller tabletop tripod to set the Splash on. The bowl is a straight wall glass 10” diameter approximately 5.25” tall. We set the distance of the drop to the water level at approximately 9”.
Typical setup in our garage using 3-flashes and the large bowl.

Make certain everything is level. We try to have the table level as well as the arm off the tripod. Then there’s the MIOPS itself; which we believe is the most important to have level. If the MIOPS valve isn’t level the drops coming out will fall at an angle causing problems. We have a cheap 2-bubble level that we put on top of the water tube to check the plum.
The following are samples from the second day of testing. All were captured using the GFX 50s, GF120mm lens and 45 WR extension tube. 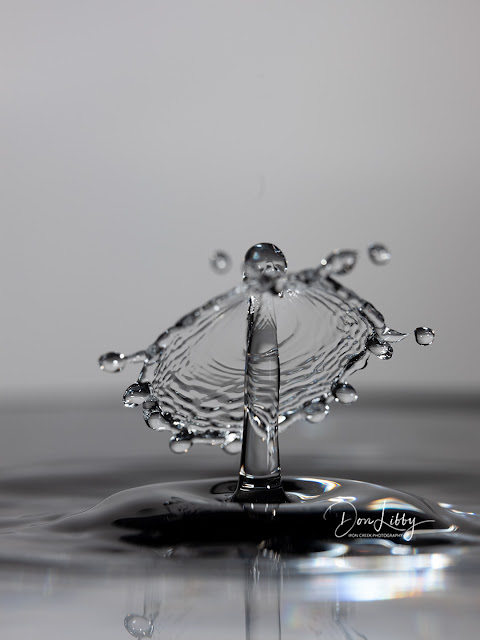 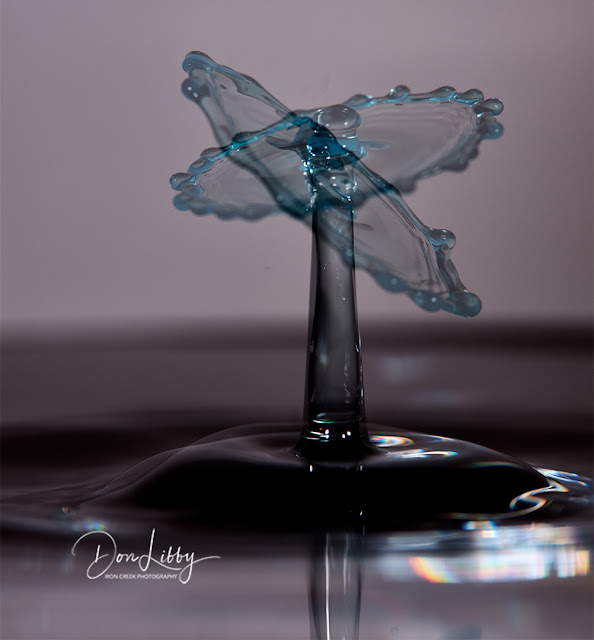 Don's finger slipped and activated the trigger a second time while the shutter was opened for a total of 6-drops.
f/11 ISO 400
We also wanted to test the results of using a Singh Ray Color Intensifier filter on a couple of shots.﻿ 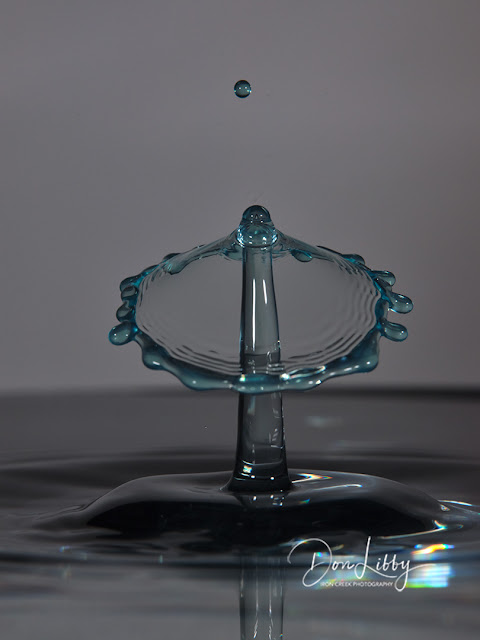 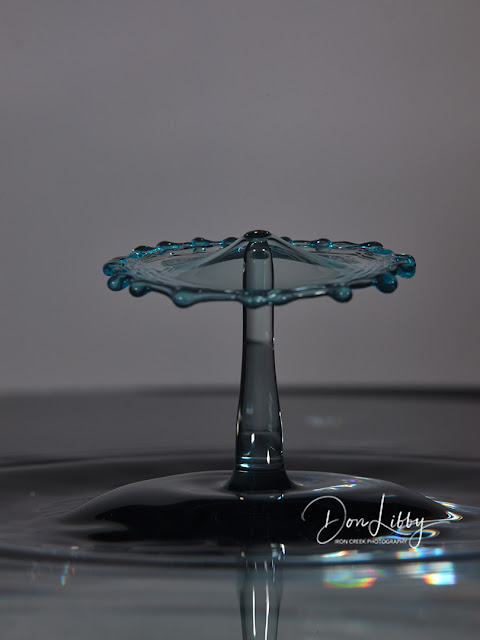 f/22 ISO 800
We’ve now used the MIOPS Splash twice while writing this. This might not seem like much however we’ve been shooting water drops for several months and am not entirely new to it. There are several things we like and enjoy about this system. Ease of setting up, size of set up, no need to be plugged into an electrical outlet. 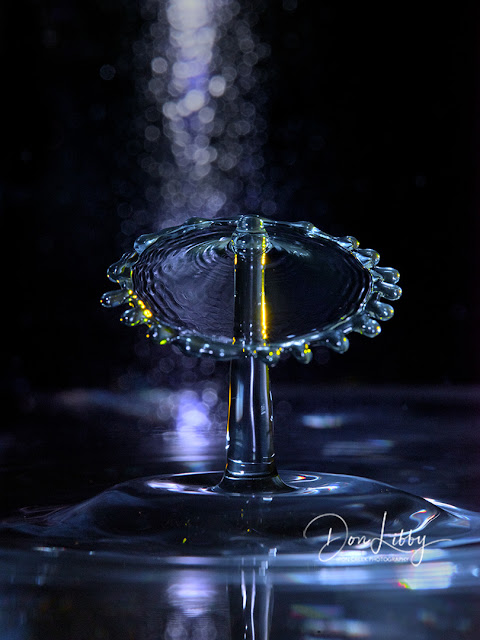 
We had been wanting to experiment using photographs as back drops and decided to test it out. The images in the background are 8x10 ceramic tiles.
Lake Jackson in Grand Teton National Park, Wyoming 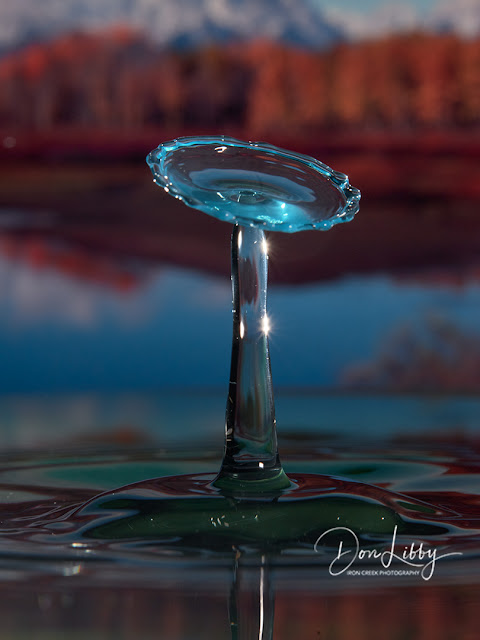 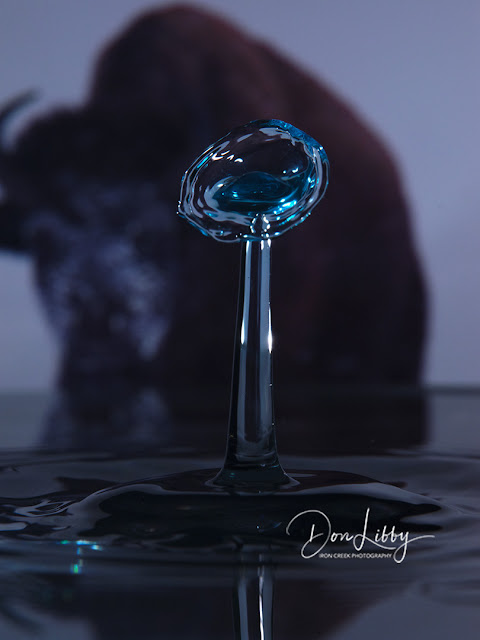 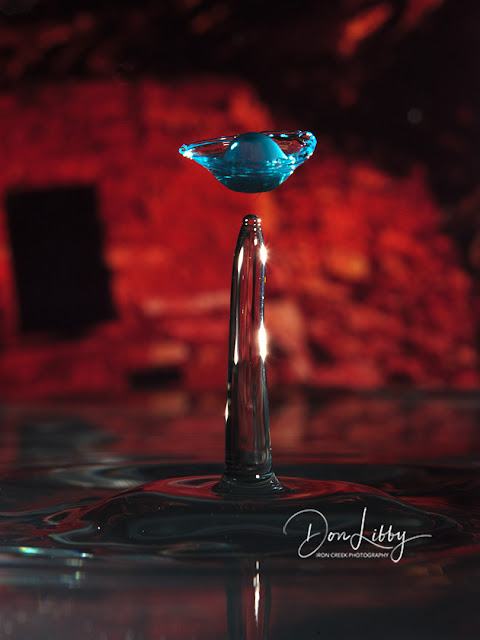 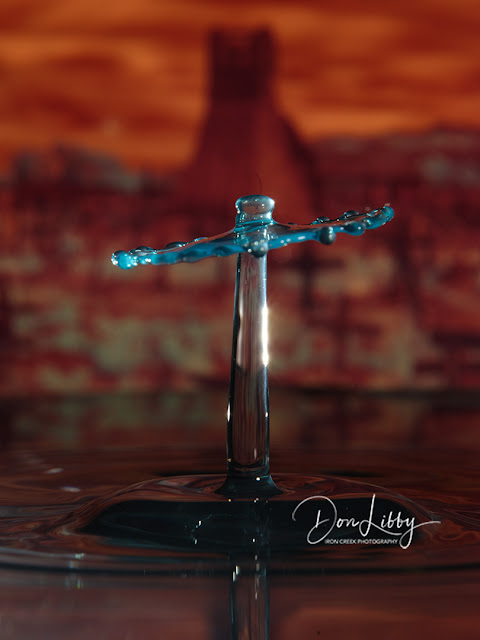 f/22 ISO 2500
We'd like to suggest that MIOPS include information on purging the system once done. If not, it’s a simple method of rinsing the tube and valve out with warm water and setting the first drop to 999 ms in order for the water to purge out. Watch the water as it comes out and once you have clear water the system is clean. The last thing you want is to be using a dark color one day and light the next and get left over coloring as it cleans itself. Do it right and you won’t have an issue.
Taken years ago in Tubac Arizona we titled "Blue Pot" 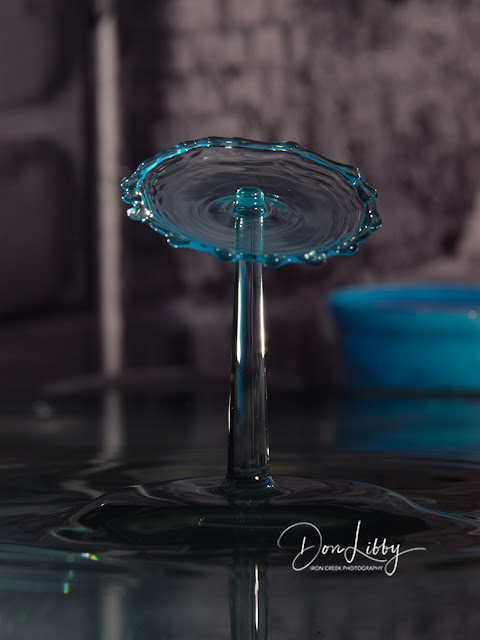 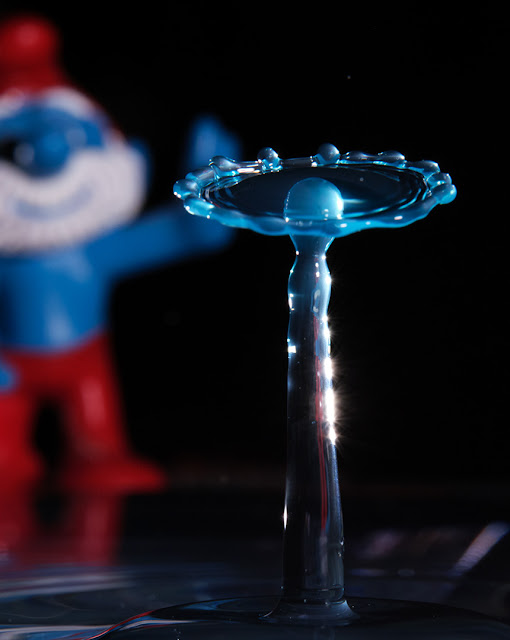 UPDATE:
Received the 3.5mm cable for the Di700A flash and tried it out and it works. No more need to use a combination of tape and rubber bands to keep the Sync cable in place.

Posted by ironcreekphotography at 11:13 AM