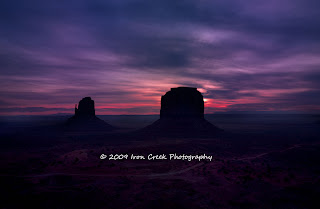 Being a landscape photographer to me means that I am always on the lookout for the unusual whether it be the location itself or colors or any combination. Sadly (for me) there just isn't that many locations that haven't been visited before and photographed.

I've had the great fortunate of visiting many locations during other than ideal conditions. I've always said the worse the weather the better it is for landscape photography. I've visited the South Rim of the Grand Canyon when the combination of snow and heavy cloud coverage made it all but impossible to see 10 feet in front of you when all of a sudden a small patch clears over the Canyon revealing brilliant sunlight and colors that unless you were actually there you'd swear was fake or trickery.

Sandy and I spend three mornings recently at the new View Hotel in Monument Valley. We went with no clear idea of what we wanted to capture knowing that we'd "know it when we saw it". We failed the three nights in getting any decent sunset shots, none of the images we took during the rest of the day were "note worth" and two out of the three mornings failed to produce any "color"; this was all due to a very clear cloudless sky. We did wake up to find an unexpected snow fall however the snow didn't last long.

We went to bed our last night thinking we'd not take anything of any real use until we spotted clouds forming around the horizon to the east. Now for those not familiar with the concept of seeing the horizon in the South West - that horizon can, and is often several hundred miles in the distance; so even though we could see clouds forming, it didn't mean that we'd actually have good cloud coverage by the time we had to leave. So we went to bed with our fingers crossed.

We posted an image of that morning on our last post but felt it didn't really do justice to what we saw that morning so we are including another image taken during the same timeframe. Yes the image was processed in both Capture One and Photoshop and yes the colors are real - there's no trickery involved here other than some lens cast corrections and stitching multiple images together to make a panorama image. This image was taken with a Cambo RS 1000 technical camera attached to a Phase One P45+ digital back using a 72mm lens.

As noted in a previously we are scheduled to return in the summer during our monsoon season where hopefully we'll capture either lightening over the buttes or star trails so stay in touch.

Posted by ironcreekphotography at 6:20 PM