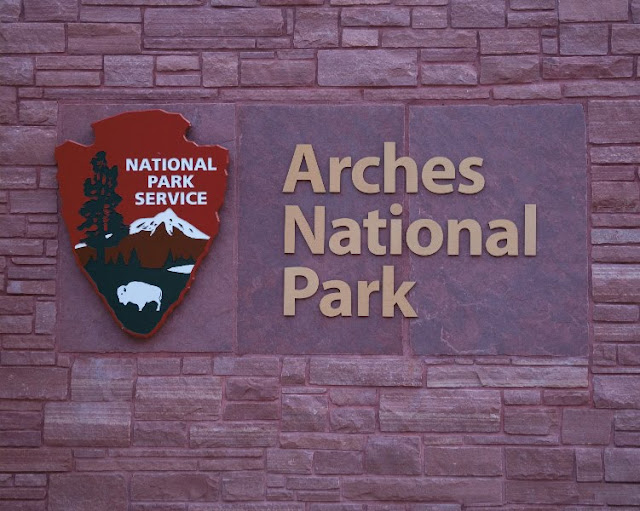 You shouldn't go to Moab Utah without at least attempting to visit the State and National Parks, primarily Arches National Park.

Park Avenue Viewpoint - Leica M9 35mm
To learn more about Arches National Park we suggest you visit the website here. The park is open 24 hours a day 365 days a year and is just a couple miles North of Moab on Route 191.

Park Avenue 2-shot Panorama - Canon 1DsIII
We made this our last stop before heading home and we're glad we did. The images were all taken late afternoon on Thursday May 20th; Sandy as usual was using the Canon 1DsIII along with the 28-135mm lens while Don was using his Leica M9 and a choice of either the Summicron 35mm f/2 or Summarit 90mm f/2.5 lens; somehow the 50mm never left the bag however he kept muttering how much a 135mm would have been that much better. 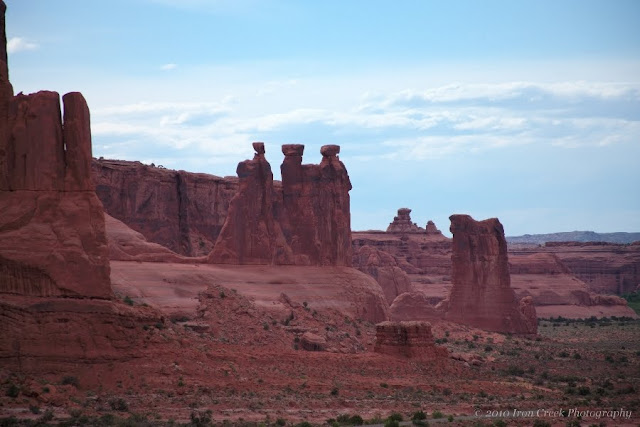 Three Gossips - Canon 1DsIII
We've included a lot of images so take your time and enjoy your visit. 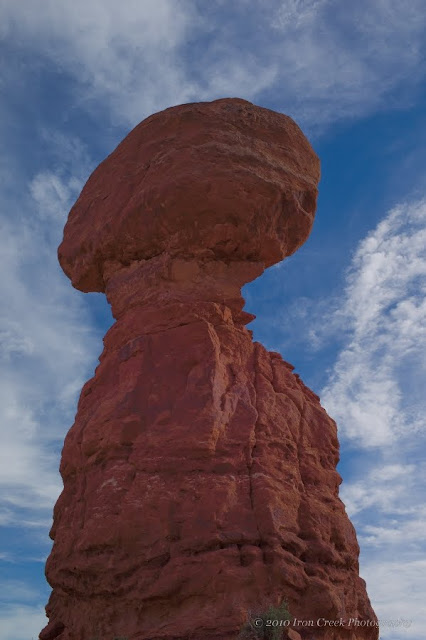 Balanced Rock - Leica M9 35mm
There's a well maintained paved road leading from the Visitors Center into the Park. The first thing you notice is a climb of several hundred feet that puts you into the Park proper and allows a brief view of the valley below where you'll see Moab in the distance as well as the La Sal Mountains. You'll be sharing the road with bicycles so be careful; while we're on the subject of being careful remember you're still in the Southwest where days can reach into the 100's and nights can be very cold. 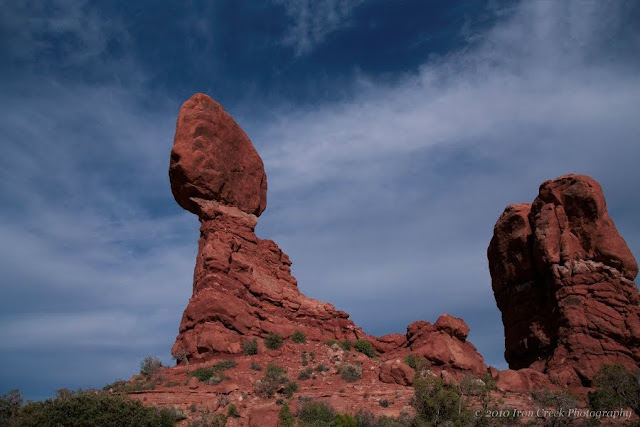 Balanced Rock - Canon 1DsIII
The images shown so far are all loosely in the order you'd see them coming from the Visitors Center. There are plenty of viewpoints however these are just a small sample of what you'll see.
Does anyone else besides Don see Barney? 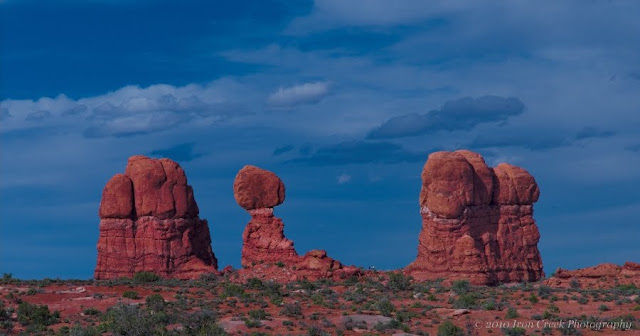 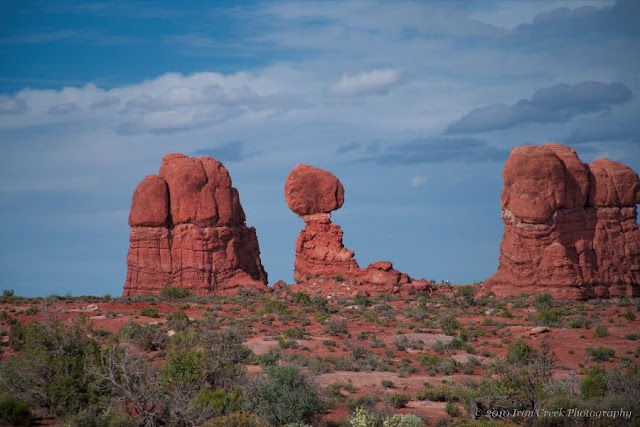 Balanced Rock & Barney Canon 1DsIII
While the road continues further inside the Park we decided to take the road leading into the "Windows Section" This road ends at a large parking lot where you can walk out to the North & South Windows as well as Turret Arch. 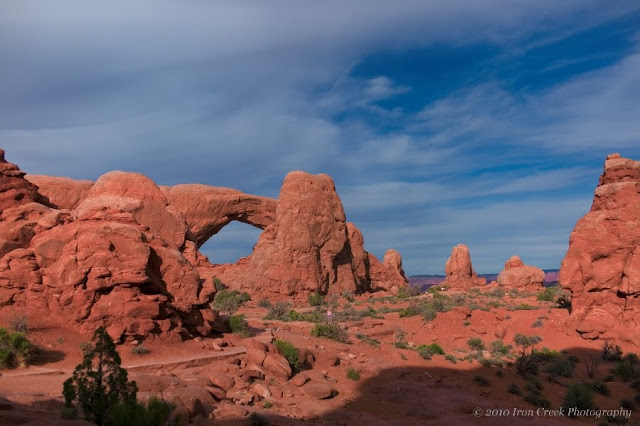 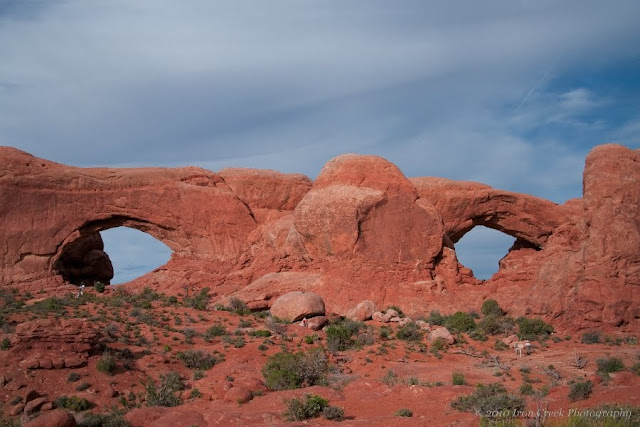 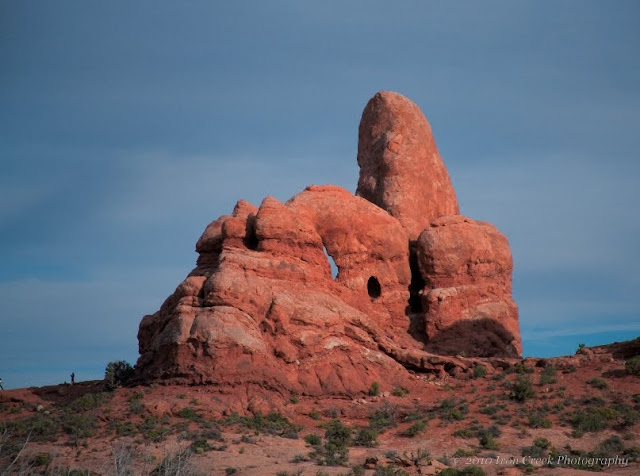 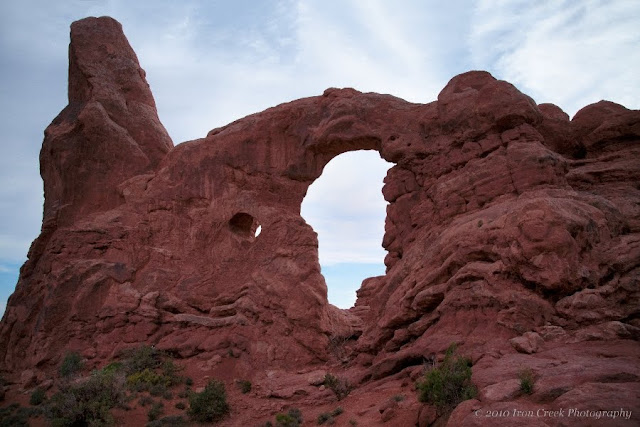 While here you'll have the chance to either walk or drive to see Double Arch.  There's a dirt walking path that connects the two parking lots; if you stop at the higest point you'll be able to get an image similar to these. 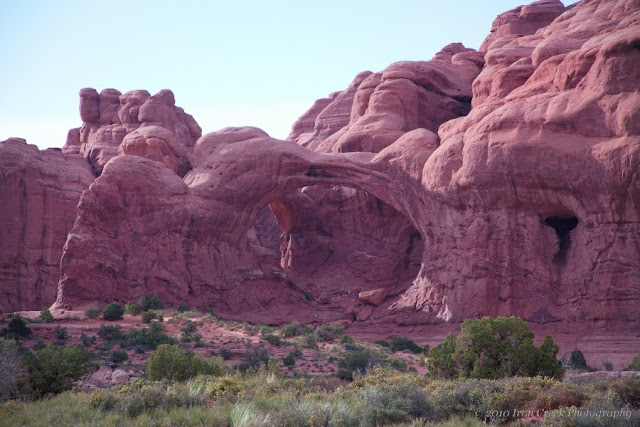 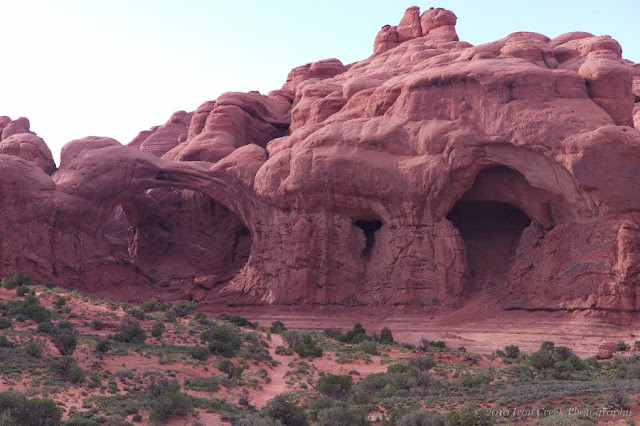 Double Arch - Leica M9 90mm
We pulled into the Garden of Eden to watch a group of rock climbers as well as get a couple of snap shots of the area. Rock climbers aren't new to us as we see them often as we drive along Potash Road (that blog is coming so stay tuned) however we had never encounter them inside Arches. 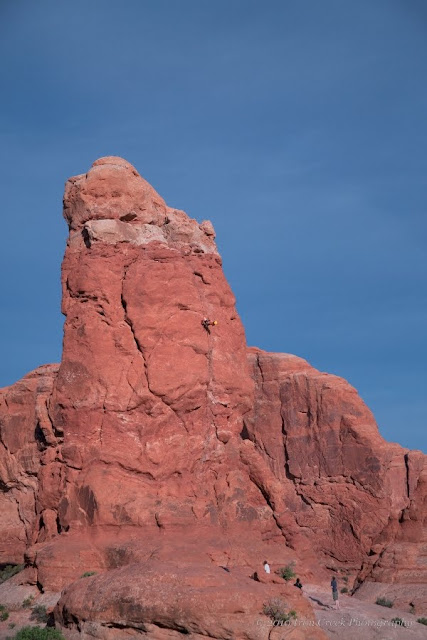 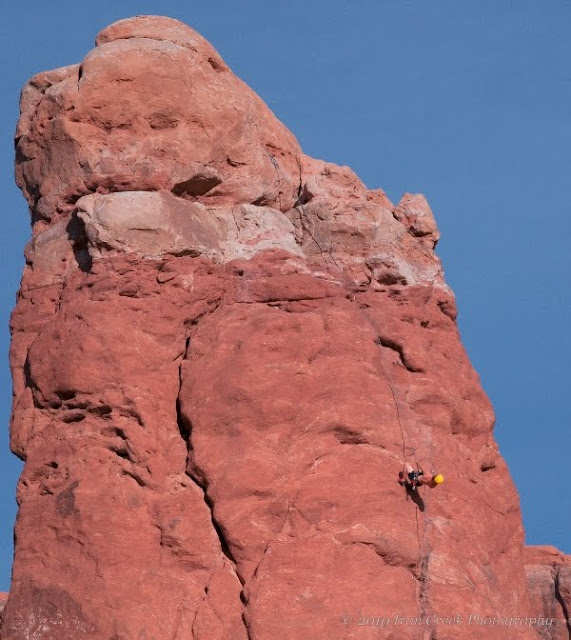 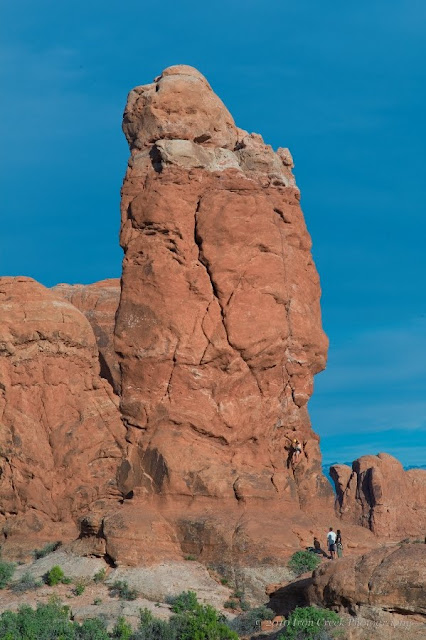 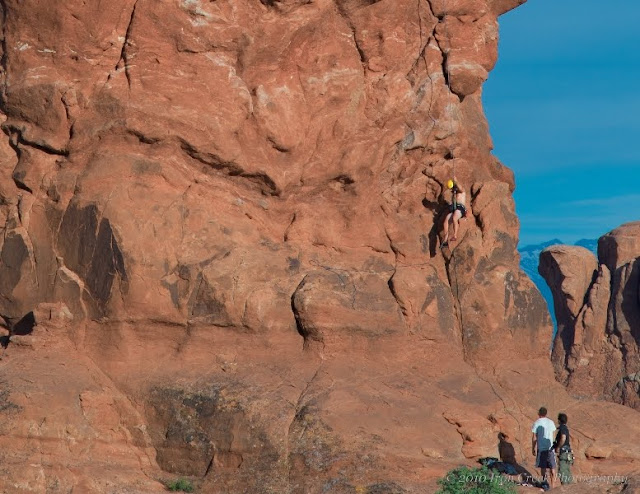 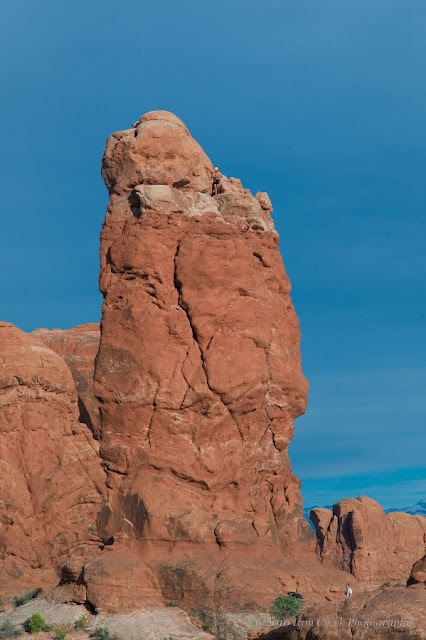 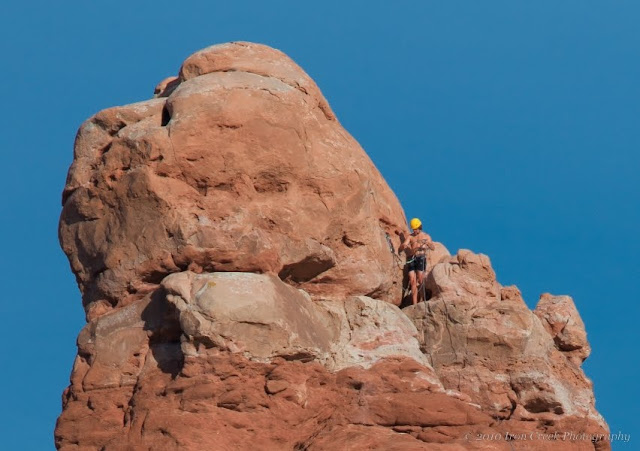 100% crop
Don caught this image while shooting the climbers in the Garden of Eden area. See any faces? 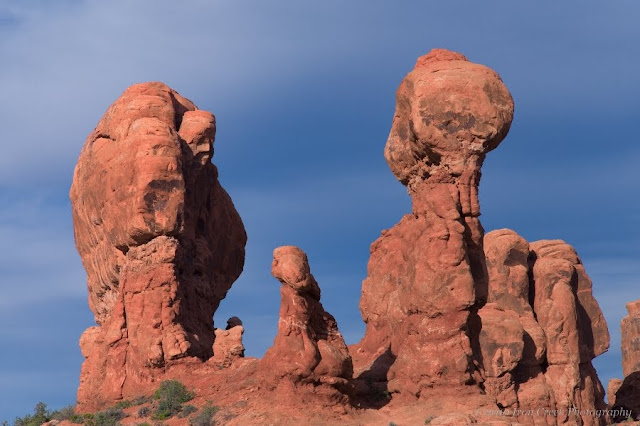 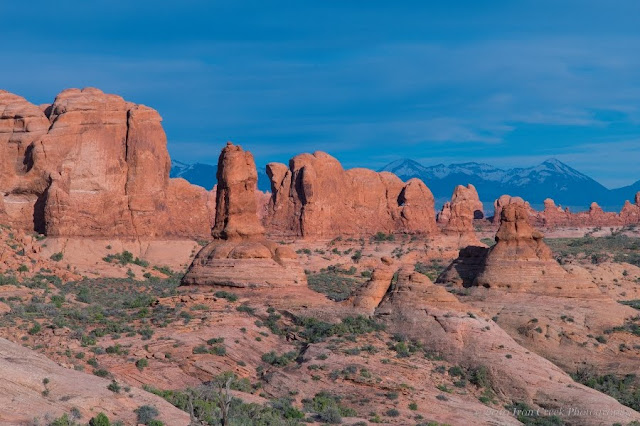 Leica M9 90mm
There's more coming from our stay at Moab including a couple of images of a commercial being shot so stay tuned.

Thanks for visiting us and please remember your comments and thoughts are always welcome.