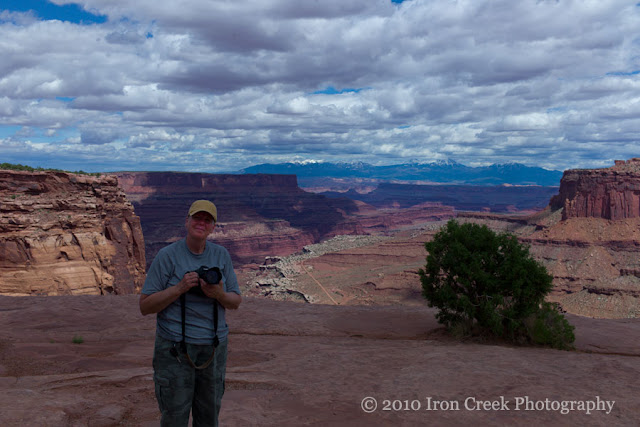 Sandy near the top of Shafer Trail Road, Leica M9 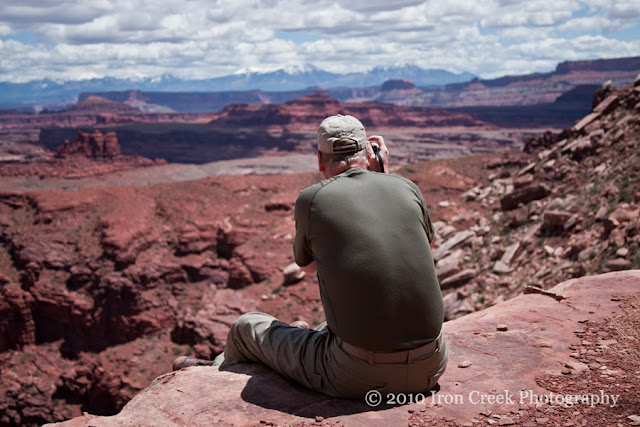 Don sitting down somewhere along the trail, Canon 1DsIII
If you keep on Potash Road past the petroglyphs and arches you'll soon find the Potash boat ramp and the end of the pavement. We'd strongly advise you to turn around here if you aren't in either a high clearance or 4x4 vehicle. If you plan on visiting Moab do yourself a big favor and consider renting one of the many jeeps that are available as this will allow you to get into places other than a few feet off the highway in the parks. This is also a great way to explore the area where many westerns were filmed and outlaws such as Butch Cassidy made their hideout. 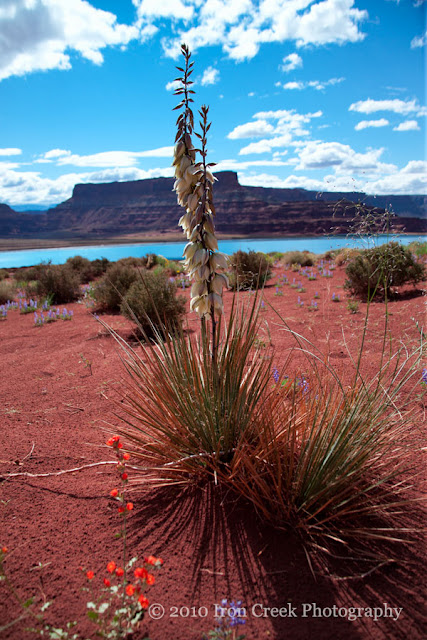 Along Potash Road near Cane Creek potash mine. The bright blue almost turquoise color water is part of 400 acres of shallow ponds used by the mine to harvest the potash and salt. Canon 1DsIII 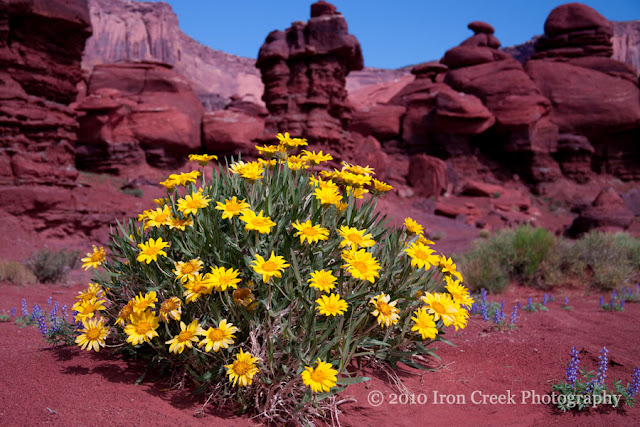 Close to where the image above was captured. Canon 1DsIII 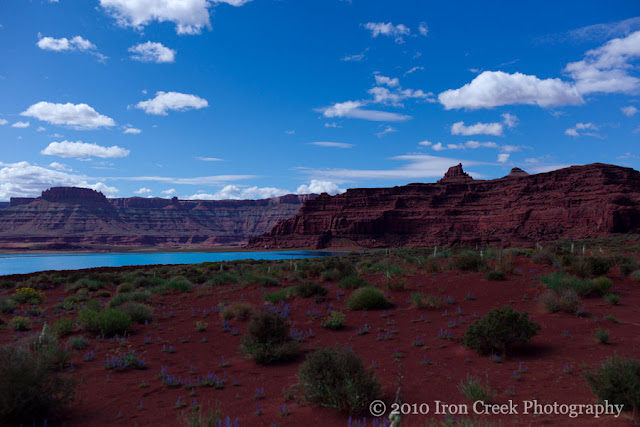 Near the ponds on Potash Road. Leica M9 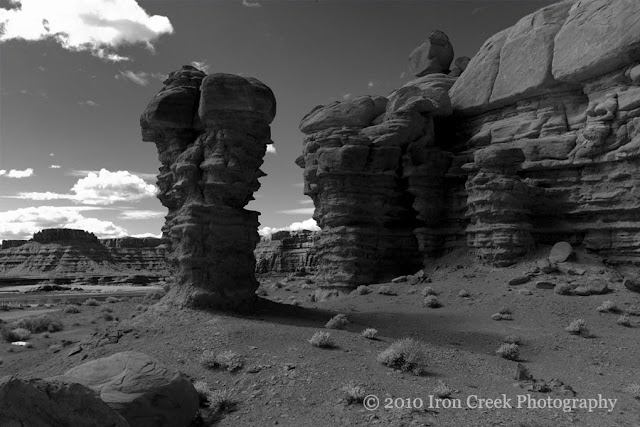 More of the same area near the mine.  Leica M9
We had heard about Disney filming in the area as well as the possibility of at least 2 commercials, 1 for Microsoft and the other having something to do about Thelma & Louise. The ending of the movie was filmed near Dead Horse State Park as a stand-in for the Grand Canyon. We saw the first signs of Thelma & Louise as we passed the Potash boat ramp and spotted a T-Bird on a flatbed truck, then about an hour later we came across the actual set. Not certain what they plan on doing however one person told us they where shooting a commercial. 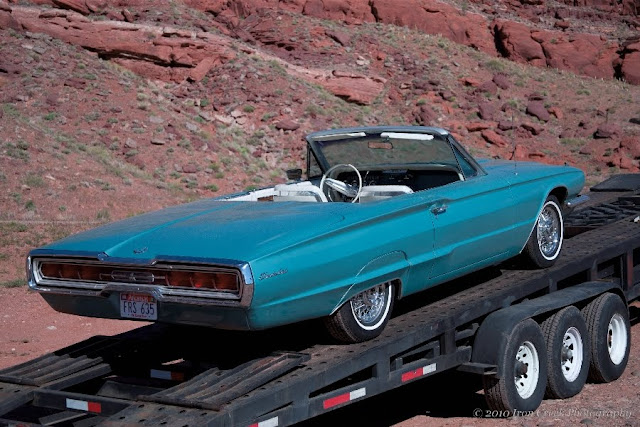 Canon 1DsIII
We couldn't stay long here so Sandy jumped out of the jeep to take these quick snap shots; look for a video from our "Jeep-Cam" that also shows this area at the end of this edition. 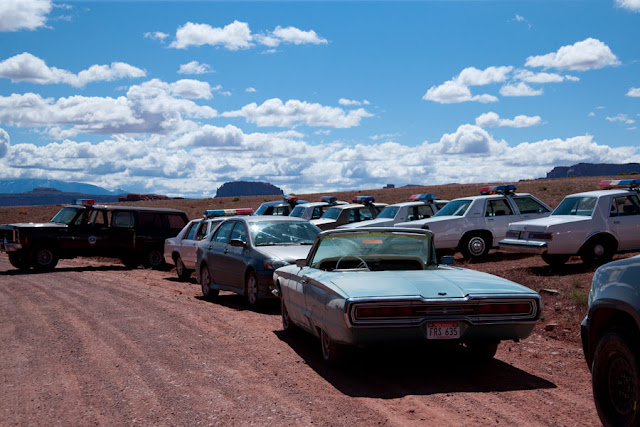 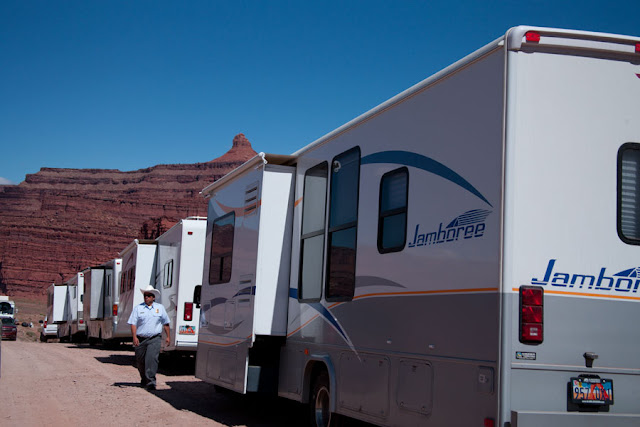 Once the pavement ends the road continues winding through beautifully scenery going underneath Dead Horse Point Overlook, Gooseneck Overlook then into the Island In The Sky District of Canyonlands National Park. Once in the Park you can either continue on the trail which winds out to Musselman Arch, Little Bridge Canyon and eventually the end of White Rim Road to Moses and Zeus sandstone spires which will take a very long time or take Shafer Tail which leads you up into the Park proper and out by the Island in the Sky Visitor Center and pavement. We were on Potash Road at around 7 am going out as far as Musselman Arch before turning around and taking Shafer Trail and finally getting back on pavement 7-hours later. 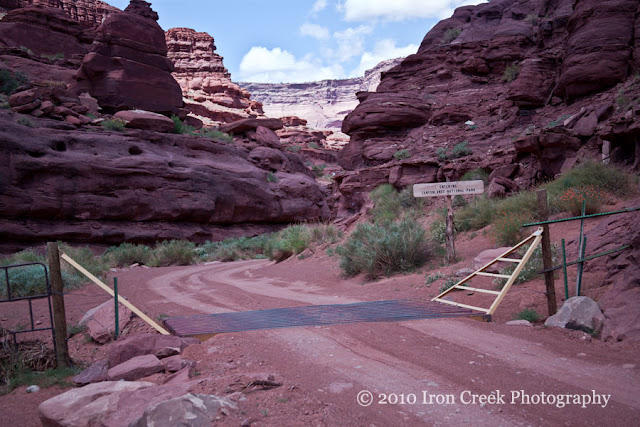 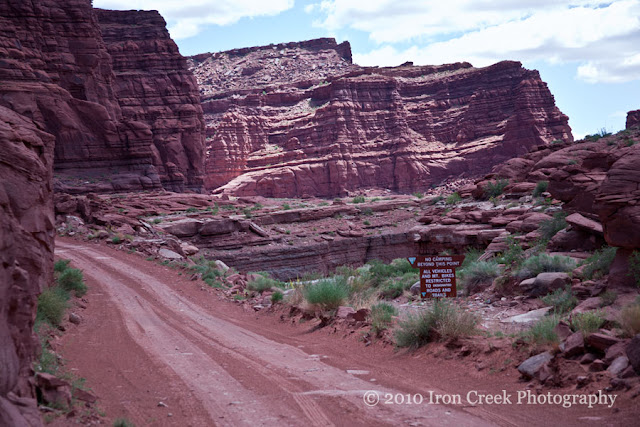 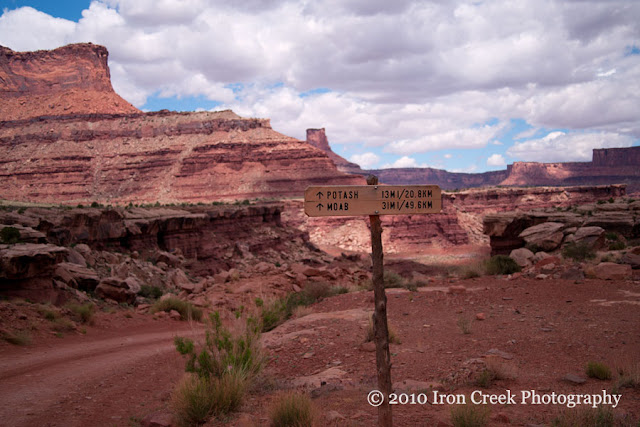 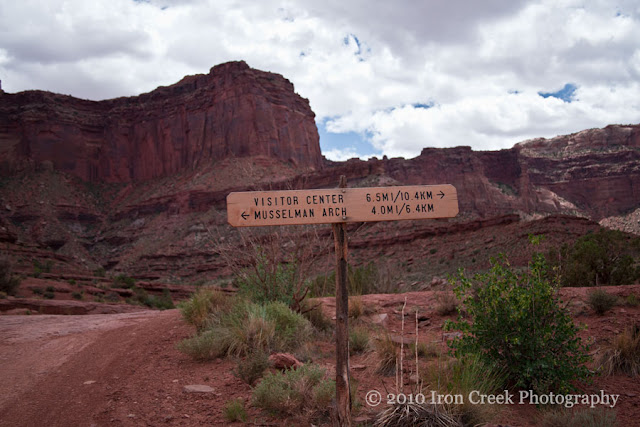 Canon 1DsIII
We wanted to return to Musselman Arch, an arch we hadn't seen since 1996. 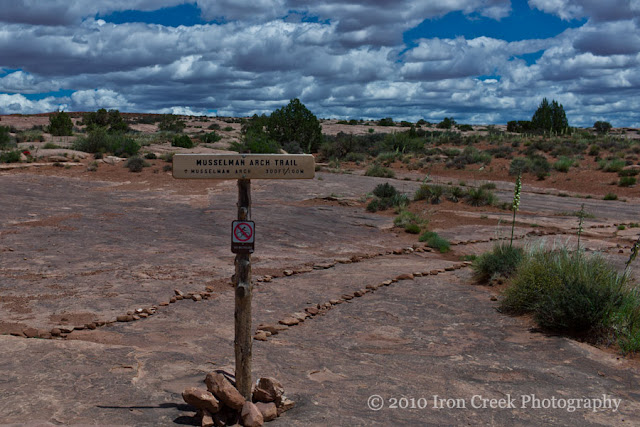 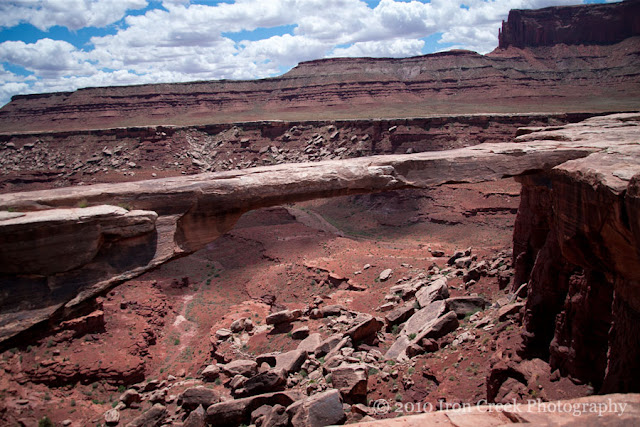 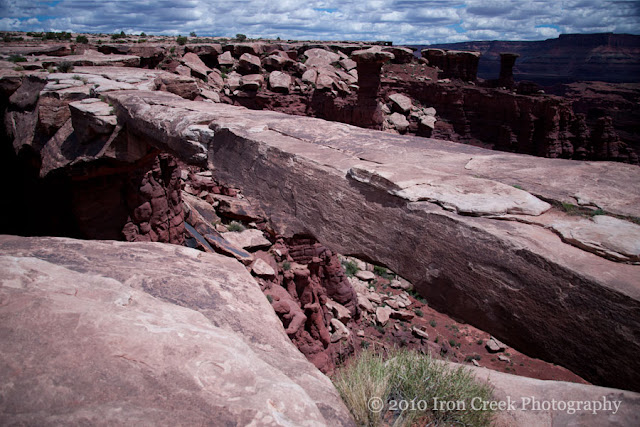 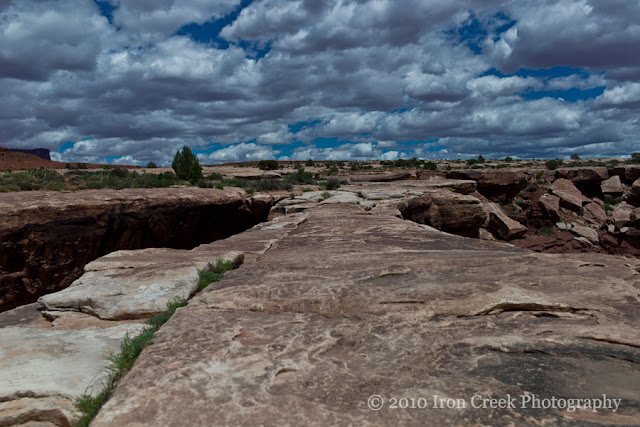 Top of Musselman Arch. Leica M9
And here are few more images from the area. 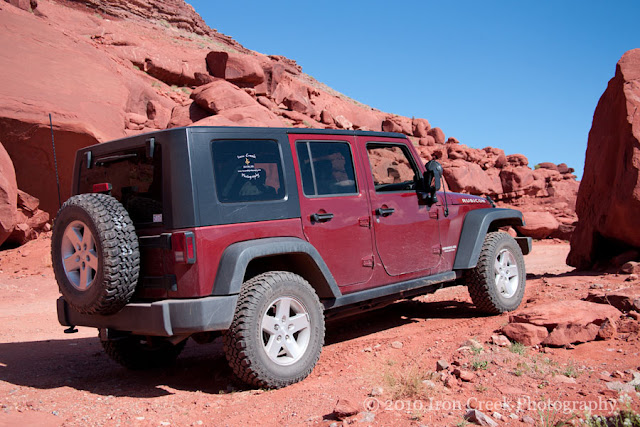 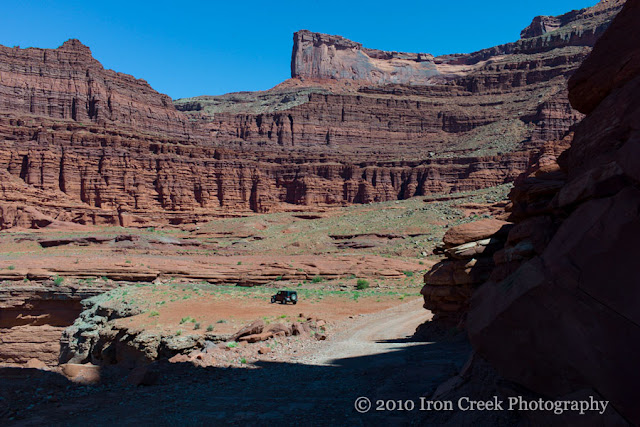 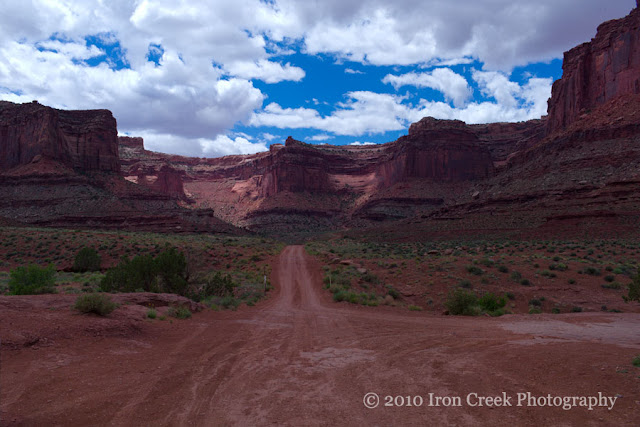 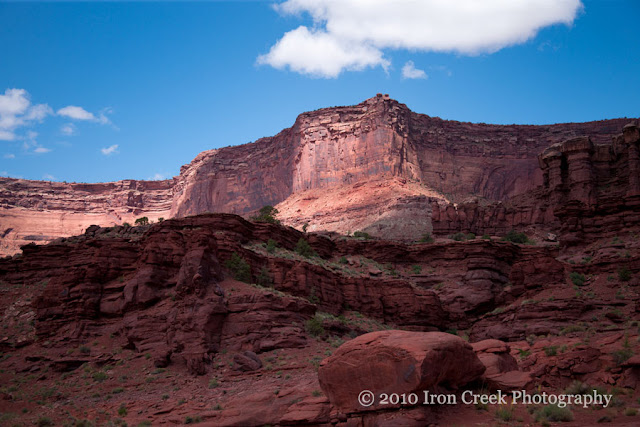 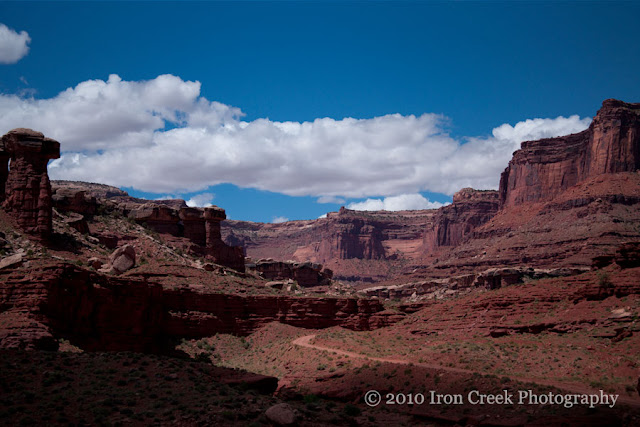 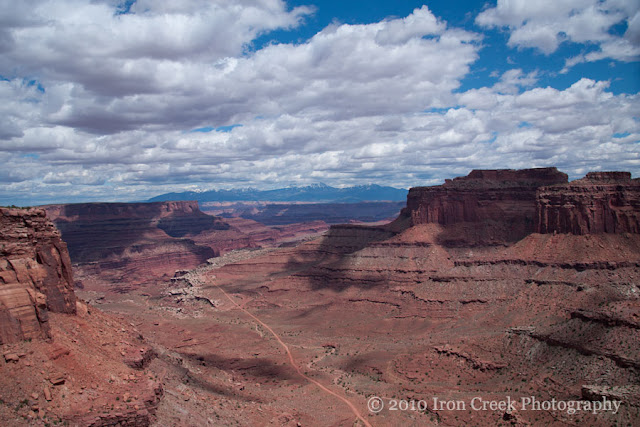 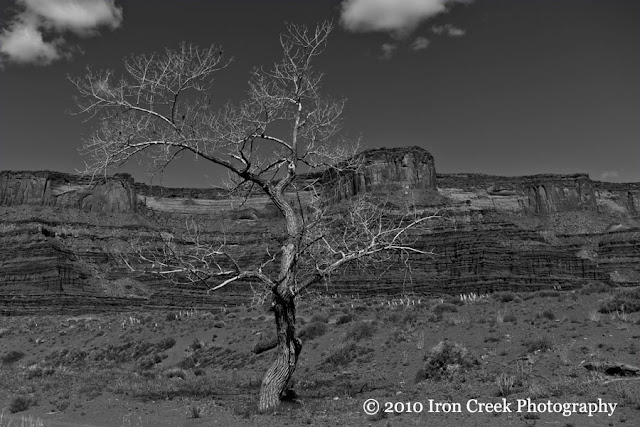 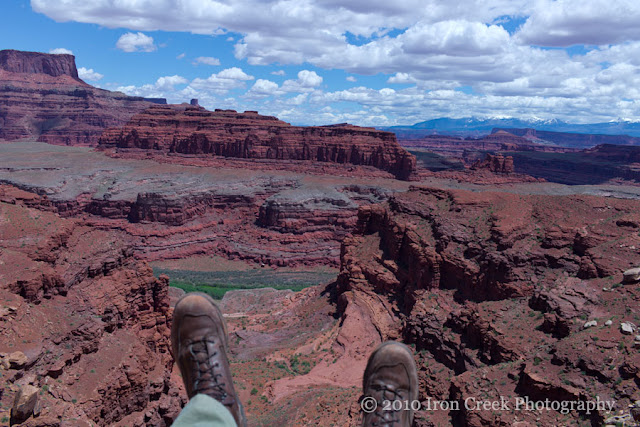 On the edge.  Leica M9
Don read a post the other day on a camera forum about how the Leica M9 wasn't suitable (in the poster's opinion) for serious landscape work. 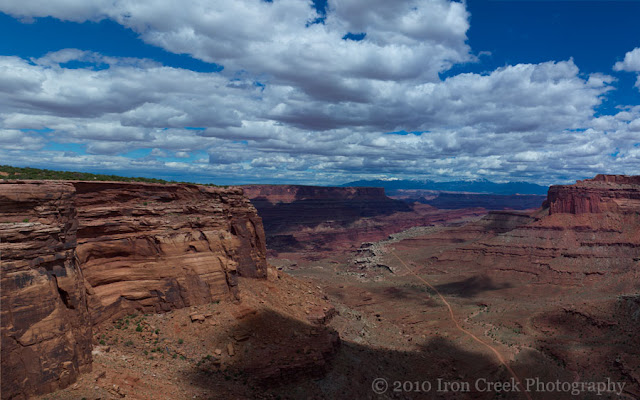 4-shot panorama.  Leica M9 and 90mm lens.
This just about ends our tour along Potash Road the only thing left to see is the video as we drove past the commercial shoot. We're still sorting and processing images from our trip and hope to have something else for everyone soon. Till then take care and thank-you for stopping by.
Please remember, your comments mean a lot so please let us know what you think.