On the trail to Ohh Ahh Point (2-shot pano)
Canon 1DsIII 17-40mm
The trail begins south of Yaki Point on Yaki Point Road.  The trailhead elevation is 7,200 feet and goes straight down, or at least it felt that way.  At .9 miles you reach 6,320 feet and arrive at Ohh Ahh Point.  Going just a little over 1/2 mile further takes you to an elevation of 6.060 feet and Cedar Ridge. 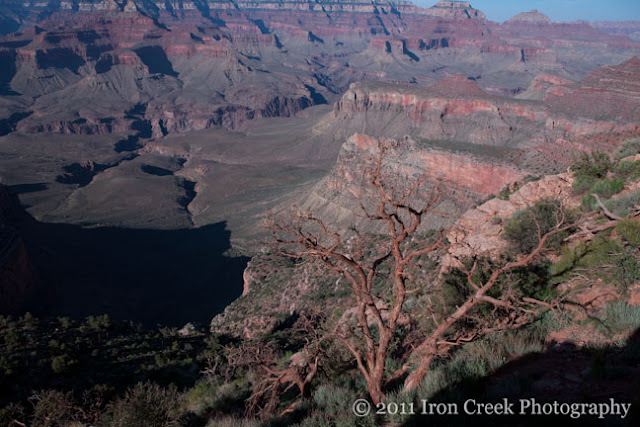 Canon 1DsIII 17-40mm﻿
We've been wanting to take the hike to Ohh Ahh Point for many years however it wasn't until Don got his Leica M9 that we actually decided to do it.  We checked the weather a couple weeks ago and found while it was forecasted to be in the 100's with no clouds at home, the South Rim had clouds and temps in the 70's.  We found we were able to get a room and off we went. 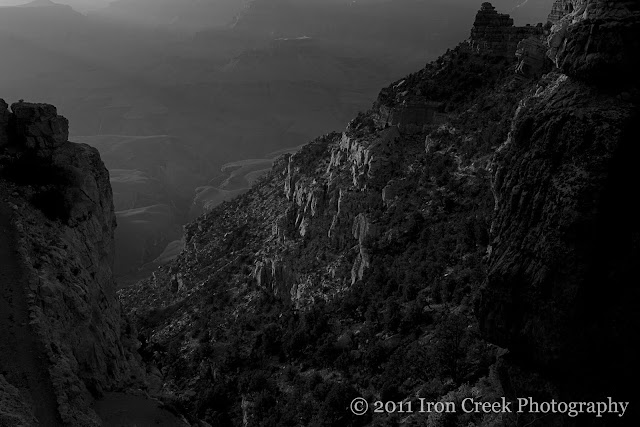 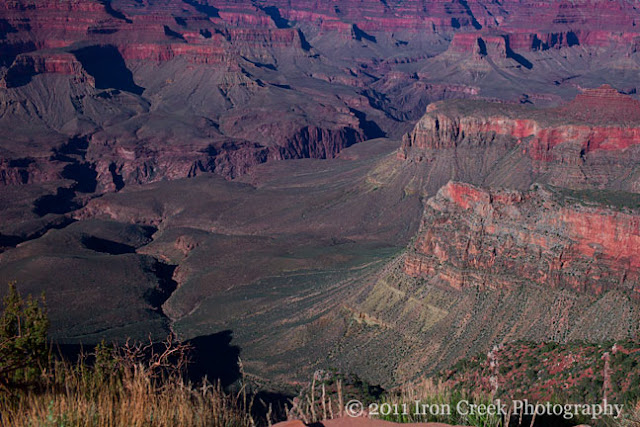 Leica M9 Summicron 35mm
It's one thing to say a trail is steep and offer elevation changes; it's another to actually experience it.  There's several stretches of trail where going downhill you feel your toes sliding in to the toes of your boots.  There's one (or was that more than one) stretch where it was actually harder to walk downhill than it felt coming back.  While going down the trail is (slightly) easier you must take it slow as it's easy to become that snowball running amuck downhill gathering speed as you go.

Returning to the trailhead
(2-shot pano)  Leica M9 Summicrom 35mm
Don's been researching this trail for sometime and this trip seemed to be the perfect time to attempt it.  His first thought was to pack his tech camera which needs a sturdy tripod thinking 1-mile should be doable.  Going uphill.  Then reason took over and he decided to make the first trip with lighter gear thus packing the Leica M9 and picking only 2-lenses (35mm and 50mm) along with a spare battery and water.  Sandy on the other hand packed her 1DsIII and 17-40mm lens and water. 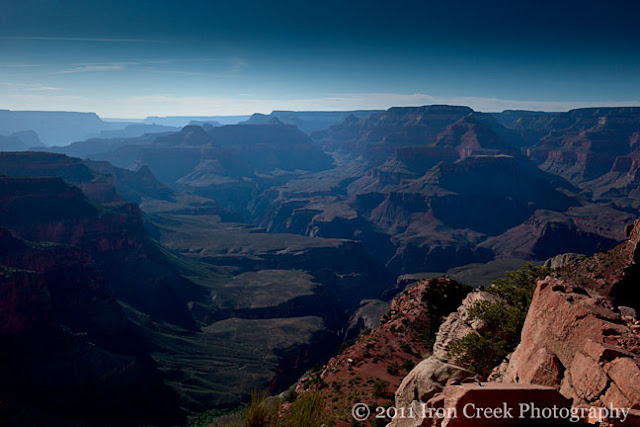 Ohh Ahh Point looking east
Leica M9 Summicron 35mm
You'd think hiking 1-mile downhill would be easy and fast - we found it was the opposite. It took us just slightly over an hour to reach the area directly over Ohh Ahh and that was with just one rest/photo stop. We found that we were constantly attempting to keep our downhill speed slow enough where we didn't begin to "snowball", besides we wanted to enjoy the scenery.


Don had a vision that Ohh Ahh Point was going to be a large area along the trail that afforded vast vistas.  He was wrong.  Ohh Ahh Point does offer stunning views of the Grand Canyon.  However there's no signage telling you've arrived.  Likewise there isn't a great expanse of space where you can set up a tripod without being on the actual trail.  There's an area at a bend in the trail where you'll see Cedar Ridge in the distance (looked closer than 1/2 mile) then following the trail downwards (less than 1/4 mile and a drop of approximately 200') is the space we decided was Ohh Ahh Point.  Sandy stayed above as Don went further down the trail to this point where he found several large flat boulders with wire cables attached.  This became Ohh Ahh Point for us.  If someone reading this knows differently please let us know. 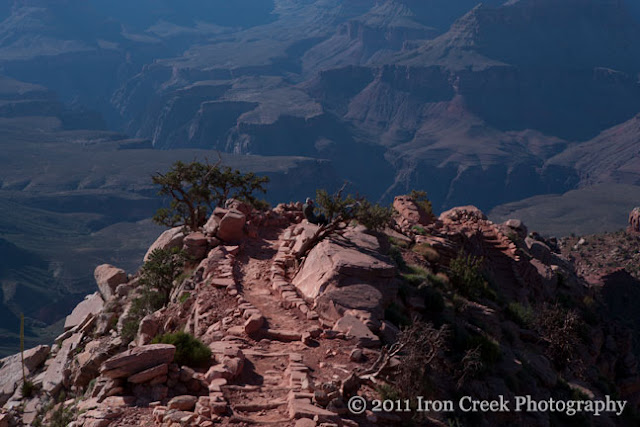 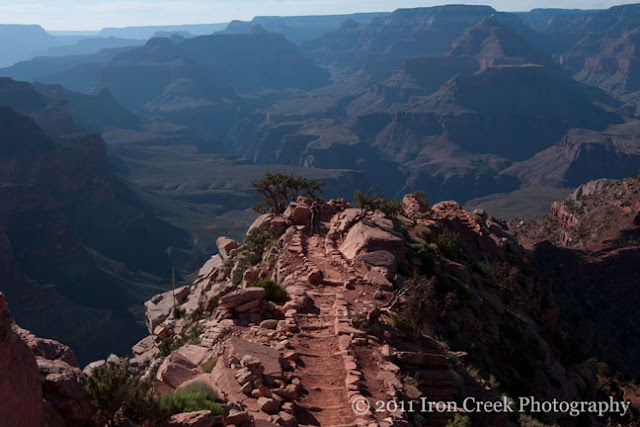 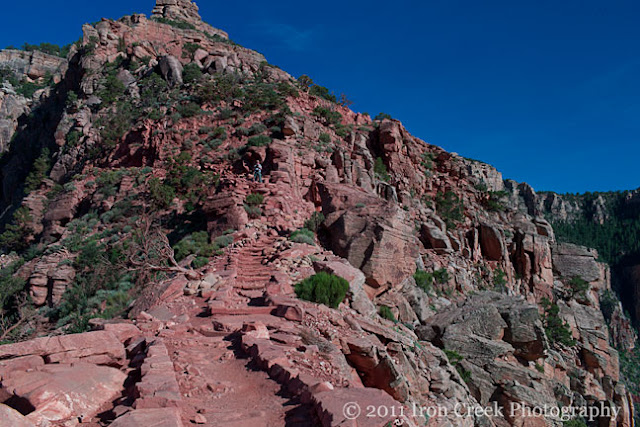 Looking back where Sandy was standing
Leica M9 Summicon 35mm
We began our climb out after staying in the area several minutes and meeting folks as they were returning from Cedar Ridge or from the river itself.  Taking our time and stopping often we made it back to the trailhead in about 2-hours after we began the trip back. 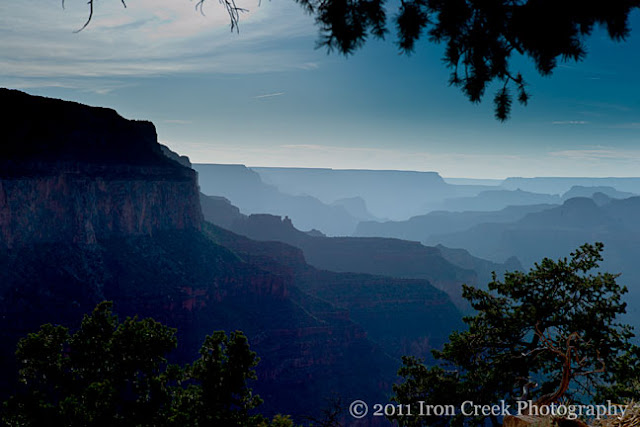 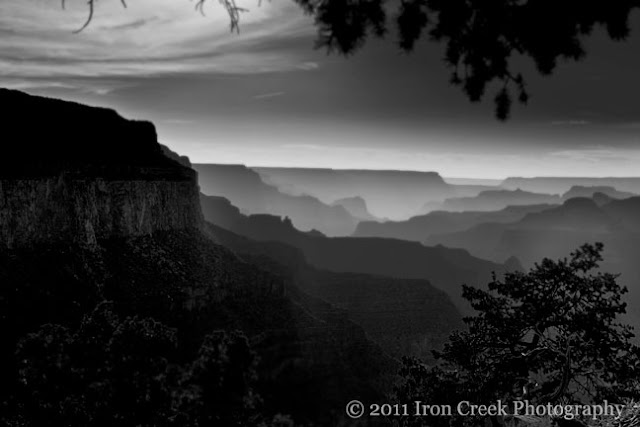 Sunset is coming while hiking back
Leica M9 Summicron 50mm
Something we hadn't discussed until now was the actual time of day we did this.  We left home for the South Rim Tuesday May 31st getting there in the early afternoon.  We checked into our hotel had lunch and decided that since the weather wasn't hot and the skies were cloudy we'd try the hike in the afternoon instead of the following morning as planed.  So off we went in the heat of the day; which due to the conditions wasn't all that bad.  We cleared the GPS at the bus stop and began the hike down getting to Ohh Ahh somewhere between 1.1 and 1.2 miles which made the round trip closer to 2.3 to 2.4 miles.  We also got to the top several minutes before sunset.  We were back on the bus headed for the Visitor's Center and our truck just as the sky was turning red. 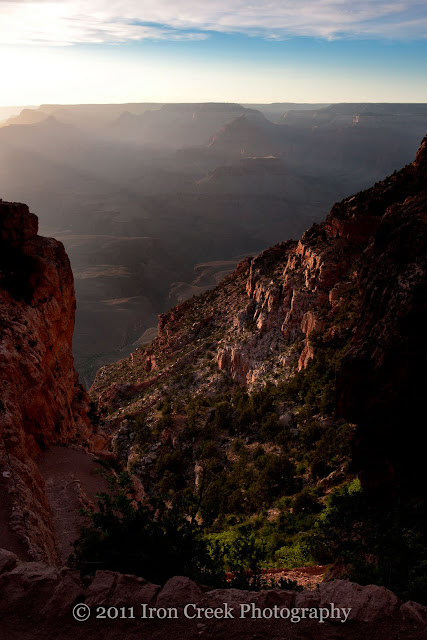 Near sunset at the trailhed
Canon 1DsIII 17-40mm 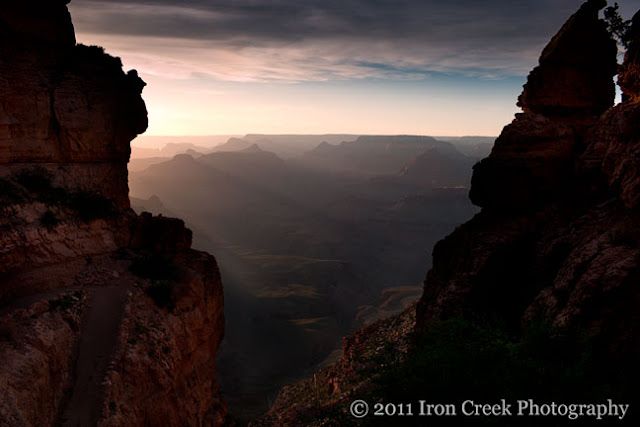 Near sunset at the trailhead
Leica M9 Summicron 35mm
Don is planning a return trip later this month on his way home from Page and plans to do this all over again (weather permitting) only this time going to Cedar Ridge packing his WRS/P65 so stay tuned.
As always we'd like to thank you for allowing us to share and please remember your comments or questions are always welcome.
Sandy & Don
Posted by ironcreekphotography at 10:36 AM