We took a very fast trip to the South Rim of the Grand Canyon this week so that I could shoot the P65 under "normal" shooting conditions; besides they were calling for great skies and just could pass that up. I used a Schneider 35mm an entire day connected to the Cambo WRS figuring that was the lens that offered the most color cast and I want to see how the images would turn out.

Total equipment used with the exception of one image shown here is the Cambo WRS1000, Schneider 35mm lens (with center filter), Phase One P65 all sitting on top of a Swiss Arca Cube. One of the new (to me) features I had written about earlier and thought I wouldn't get much use of was the ability to check the horizontal plane on the back; I found I was mistaken. While the Cube is very easy to setup and fast to level, there are times when you need that extra amount of information and help. This is where the horizontal check on the back was indispensable. 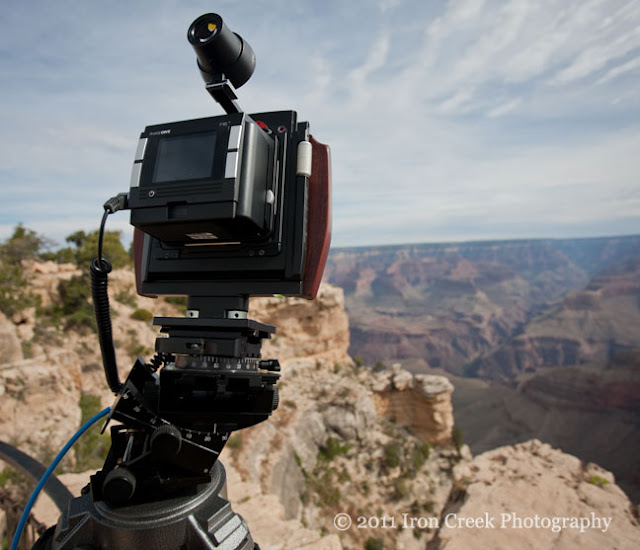 I shot a lot using the Cube in this configuration - notice the camera is not sitting directly on top of the tripod but leaning out at least 2-different angles yet the horizontal plane is level.
A LCC was shot prior to each image capture then analyzed in Capture One (C1Pro) using the technical wide-angle function to clear and color cast.
The following image is a result of 2-images stitched together to form a panorama. Both are a result of processing first in C1Pro then over to CS5 to stitch and in the case of the black & white, final processing using Nik Silver Efex Pro. 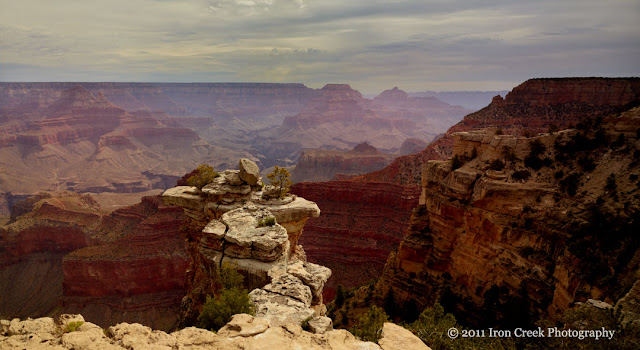 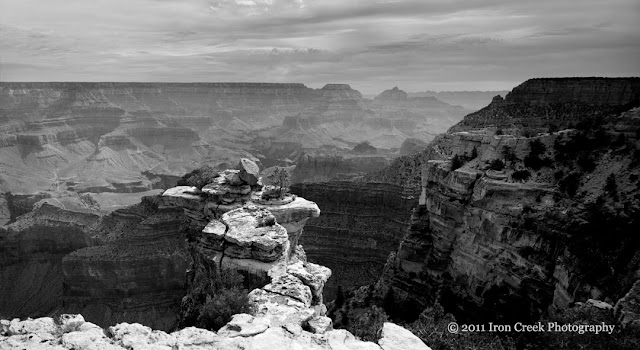 This image is the result of 3-captures set at a slightly different focus point.  The images were first processed in C1Pro before saving and opening in CS5.  The images were then blended together using focus blend.  Slightly more processing was done with this images as the color image was then processed using Nik HDR Efex Pro and later using a layer effect "toned down" a bit to taste.  The image was saved then later processed into black & white using Nik Silver Efex Pro using a tin type to achieve the end result. 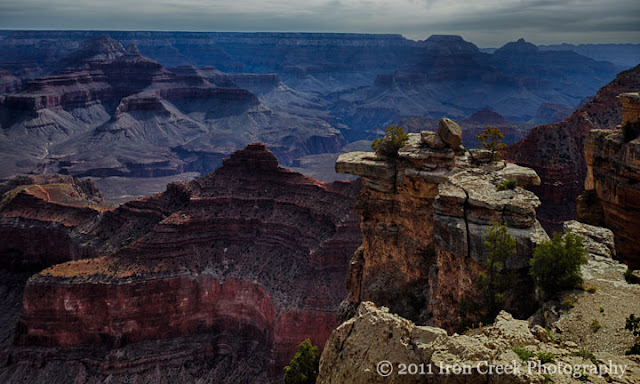 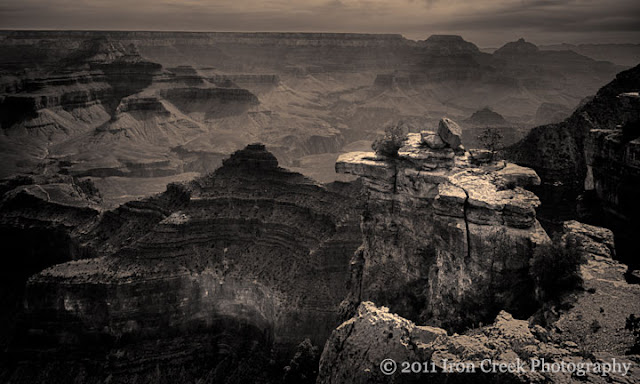 As a side note on the last image - after processing in C1Pro and blended together in CS5 and later cropped the image became 135 megapixels at 30x50. Web jpegs usually don't show the detail of the actual image and can often time introduce strange colors - the colors in the actual images are in my opinion striking to the point of being an image I'd print for the gallery.
We spent the better part of 2-days at the South Rim hiking to Ohh ahh Point on the South Kaibab Trail then later the next day shooting from various viewpoint along the canyon rim. We'll be posting more later on the hike and maybe more from a sunset shot we did at Mather Point. The images included in this post were all taken near the Mather Point Amphitheater.

Don
Posted by ironcreekphotography at 10:38 AM