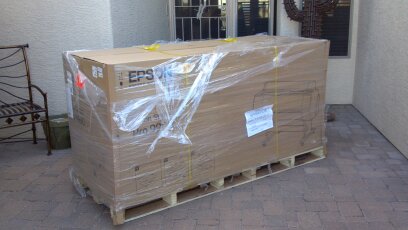 I'm uncertain the exact date Epson released the 44" 9800 however I bought one December 15th, 2006. The 9800 has served ICP well the past 5-years without problems or hiccups. Put the print media in, make sure there's ink and away you go. In short its become a fixture in the studio.
Since then there's been the release of the 9880 and the current 9890. Epson is currently offering the 9890 and 9900 concurrently with the 9890 having almost the same specification as the 9900. Actually Epson in releasing the 9900 stated it was not a replacement for the 9890.
So what's the difference and why did I replace the 9800? Good question.
As good as the 9800 is, there is a limitation; the 9800 holds 8 ink cartridges, photo black, cyan, yellow, light cyan, light black, light light black, magenta, and light magenta. There's also matte black. In order to switch from photo black to matte black requires 3-pages in the printer guide to explain which I won't even attempt to do here. I will say that there's a certain amount of draining of photo black ink involved. It always seemed a waste of ink to me therefore I never attempted the switch.
The major difference for me with the 9890 is that it has 9 ink cartridges with the 9th being matte black. The 9890 allows for automatic switching between photo and matte black. The printer reads the ICC profile of the media used and automatically switches the ink for optima print resolution. 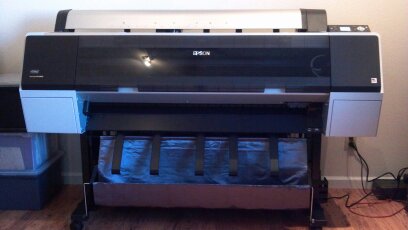 On the stand and loading the first ink cartridges
The other major difference is the spindle-free media loading. The 9800 has a spindle which must be inserted into the roll of media before placing it in the printer. A paper roll of 36" x 100' or a canvas 44" x 120' is very heavy. I've always thought the 2-most dangerous times for any media is the act of loading and unloading; it seems Epson thought the same. There are other advances however these are the 2-that struck a cord with me.There's other little nifty things like the ability to print a bar-code on the media to track how much of the media remains. As well as a new improved rotary cutting system.
So what's the difference with the 9900? 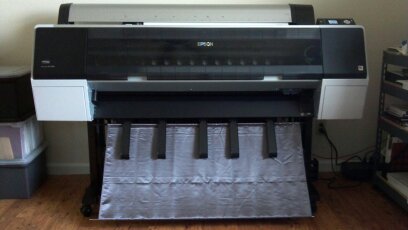 Spooling the first print
This isn't so much a printer review, rather an excuse to talk about the new 9900. While the 9800 is 5-years old it worked well and more than paid for itself. However the advances made and rebates offered by Epson were just too good to pass up.

So what's in store for the 9800? It's being donated to a local high school that has a photography school. What better way to keep a great printer working. 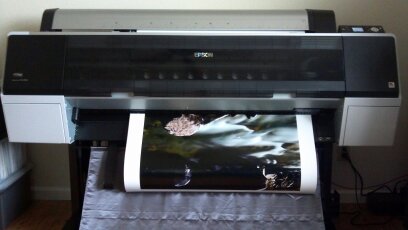 I ordered the printer on Tuesday and it was delivered Friday afternoon. The shipping weight is noted as 417 pounds so be prepared. Five years ago Sandy & I took delivery of the 9800 and it was just the 2-of us to set it up. No so this one; we hired 2-guys to help unload the printer off the pallet then with their help set it up on the stand. While it took less than 45-minutes to set the printer on the stand it nevertheless requires more than just 2-people. This thing is a beast.

The setup is straight forward, just follow the directions. I ran into one problem which turned out to be operator error. I had loaded all the cartridges in the left side and began the right when one wouldn't lock in. Turned out I had attempted to load in incorrect cartridge and the printer was telling me that.
Noise. Our studio isn't that large and I find the 9900 to be much quieter than the 9800.

Odds and ends: Paper loading is almost completely automated. Press a button push the media in and the printer takes care of the rest. I'm using the optional barcode to keep track of media usage. The barcode is larger than expected taking up 3 1/4 inches (82.55 mm). Reload the media and the printer reads the data then cuts it off. The data is also displayed on the color monitor; print an image and the remaining length is updated as you print. 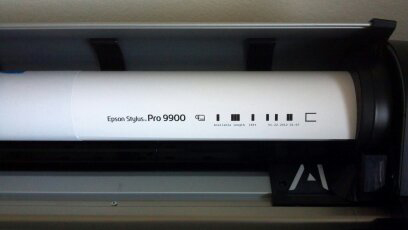 Barcode
There's more to it than just this however in the end I feel it was money well spent.


Let me know if there's any questions.

One last thought; be prepared for a lot of trash including cardboard and wood pallet.

Images taken with a Droid...
Posted by ironcreekphotography at 11:15 AM