I spent several hours today comparing the Cambo WDS to the RS-1000 and came away with more thoughts.

The WDS really only offers one way to shoot with a digital back (at least on a Mamiya mount). While the handle provides for a secondary tripod mounting it nevertheless is far less superior or easy to use when compared to the quick release of the RS-1000. I can only speak from my experience as it relates to my style of shooting. It takes less than a couple seconds to change the orientation of the back on a RS-1000 all the while keeping the image centered. Take a look at what you'd have to do with the WDS. First off you'd need a second tripod plate either sitting on the hand grip or in you bag; the act of switching will take far longer and bring with it the possibility of changing the center of the image. Yes it can be done but if I had a choice (which I do) I favor the newer RS-1000 in this regard. 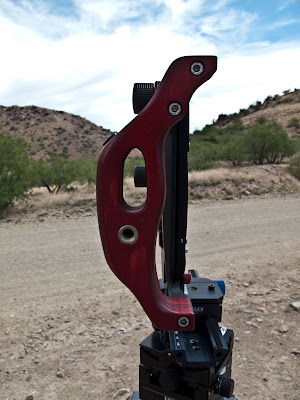 The difference (rear view) between the two: 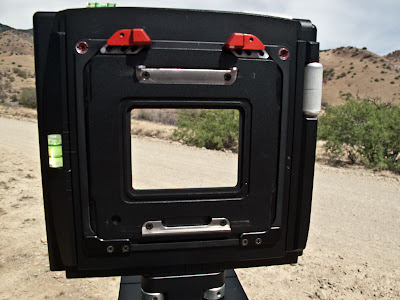 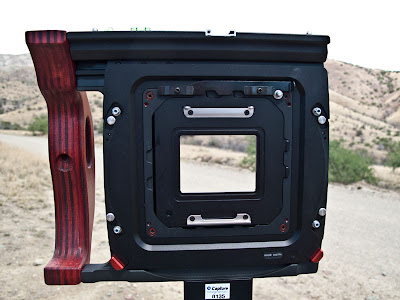 This is what the RS-1000 looks like with the back in different orientations - just by unlocking the two red levers. 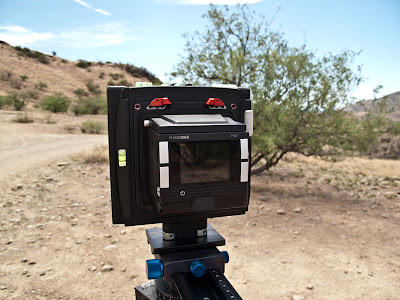 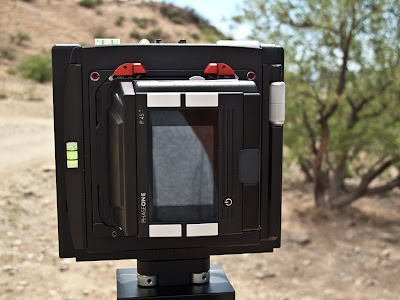 The WDS with the back attached: 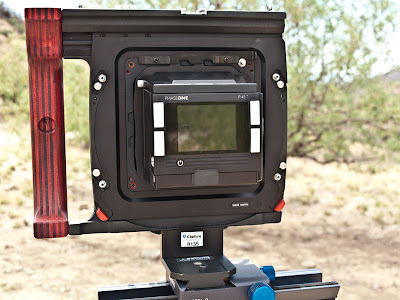 I mentioned the lensboard latch difference between the WDS and RS-1000; the RS-1000 has two levers that when locked in place provide no movement. I noticed a slight movement in the same lens after I attached it to the WDS. I plan on keeping an eye on this and will report more on that later after testing more of my lens.

I went out this morning in search of a suitable place to experiment and ended up driving up the back way to Mt Lemmon. I ran a rather unscientific experiment between the two bodies. Using the same lens (72mm) with the same settings, f/11, the same back and not moving the tripod I produced 2 images both containing 6 images (2 rows x 3 columns). I thought this would give me an idea of what if any difference there is between lens movement and back movements. I opened the images in C1 and ran the LCC then moved them over to CS4 for stitching; no other processing was none. I flatten the images dumbed them down for the web and loaded them here. 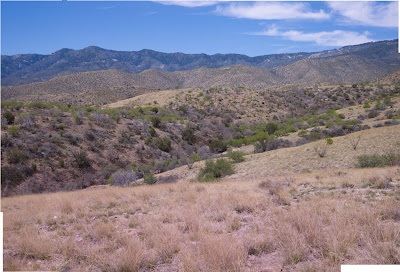 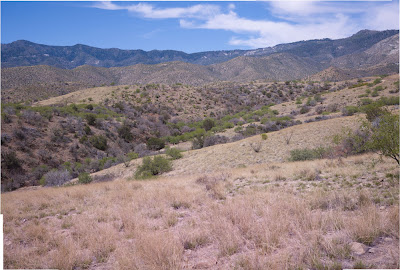 Notice the white areas around the borders. These two images are very close however there's less white in the second image which means more usable image from the RS-1000.

I also found in shooting these images I was forced to work more in front of the camera on the WDS than the RS-1000. I needed to be in front of the WDS every time I made any movement where I could accomplish the same movements on the RS-1000 from the rear. It may not seem like much but it's a big deal for the way I shoot - especially when I'm on a canyon rim with a couple hundred feet drop in front of me. I'd have to swing the camera around each time I changed movements which can only lead to trouble,

This will be the end of this stage of my comparison with the next stage in Sedona when I really start taking images. Part II will begin next week.
I wanted to add a couple idle thoughts on both the WDS and RS-1000. They're both what I'd call dumb bodies; neither have a computer, viewfinder or batteries; therefore making them dumb. Their sole purpose in life is to be a place where a lens and a back (either film or digital) get to meet and make beautiful images; in this particular case you need all three elements to achieve that goal.

Both bodies offer the ability of movements; one around the lens the other around the back. The WDS was originally offered as a 4x5 film camera and only later reconfigured to accept digital backs. The major thing in the WDS corner is the price. This could be an excellent choice for someone just starting out on a budget (and who isn't). Another factor in favor of the WDS is the ability to still shoot film to include 4x5.

Cambo decided to take the WDS into the 21st Century with the introduction of the RS-1000 last year. The RS-1000 was developed for digital use only and incorporates several changes, some subtle others not so. The tripod mounting is parallel to the body making it easier to attach (my thought). They included witness marks (my term) on the rear face for movements. The movements are all on the back, thus keeping the lens in a static position. And one of the most important changes (to me) was the ability to change the orientation of the back while not disturbing the body. And there's more.

Both bodies are excellent examples of what Cambo has to offer and should provide years of service to any photographer. My main though that has been running through my head since working with the WDS is that I am very glad that I brought the RS-1000 when I did otherwise I would be now and selling the WDS as the RS-1000 just "fits" me better.

Don
Your comments as always are welcome.
Posted by ironcreekphotography at 4:42 PM