Comparing the Cambo WDS and RS-1000 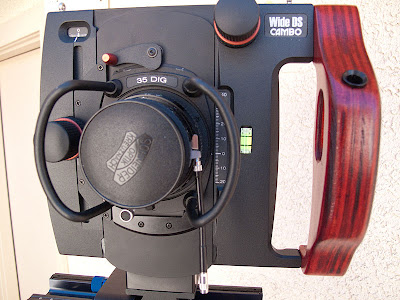 There's been a lot of discussions lately on technical cameras and some questions regarding the differences between the WDS and RS-1000. While I did my research into the two and choose the RS-1000 I nevertheless actually had never held a WDS in my hot little hands. Chris at Capture Integration was originally going to send me a WDS for testing last year however sent a RS-1000 due to s rental scheduling conflict.
My choice of the RS-1000 had to do with several factors mainly being it was designed specifically for digital and I've stopped shooting film several years ago and in fact no longer own a film back. I also saw having the movements on the back versus being split between the back and lens beneficial to my shooting style.
The one thing that has worked against me is that since I've never actually worked with a WDS I simply can't offer firsthand experience between the two; until now.
I wrote Dave Gallagher of Capture Integration about my thoughts and told him of my wild hair idea; loan me a WDS so I can write of the comparisons and differences between the WDS and RS-1000 and to my surprise he not only thought it was a good idea he also sent me a WDS to play with. [This is just another example of why finding a great dealer is worthwhile].
The WDS is on the truck "out for delivery". Sandy & I have had a trip planned for Sedona for several months and I plan on using this trip to do the compression. I don't see this as a test as I'll be using my lens and digital back; the only difference will be the body I use. Right off the bat I know one is larger than the other and one offers a difference in movements. What I hope to accomplish is answer any questions of "so what's the difference" and to give me a much better understanding in order to share with those who want to know.
I plan on setting up at least one shot duplicating the exact image using both bodies and the same amount of movements the comparing the two side by side. What I'd like to hear is any and all suggestions of what you'd like to find out. What is it you would do if you had both bodies? Do you want actual weight and size difference? Let me know.
We'll be in Sedona June 14 to 18th so if there is anything you'd like to try between the two bodies please let me know and I'll attempt to do it. By the way, Jeffrey did an excellent initial review last year here.
The following are my somewhat subjective first thoughts on the Cambo WDS.

Very well built however I was expecting this. The other consideration is this body is from Capture Integration's rental fleet they've been good enough to loan me and while it's been a rental there's little if any evidence of hard use.

I like the wooden handle (a lot). Not too sure why other than it just looks "neat" and feels very good in my hand. Cambo shows optional wooden handgrips for the RS-1000 however I haven't actually seen any.

I have no proof other than watching Michael Reichmann on one of his videos however I feel you could very easily shoot this handheld. To paraphrase Mr. Reichmann, "Worlds Most Expensive Digital Point-&-Shoot".

The thing is a beast when compared to the RS-1000. While I haven't (as yet) placed them side by side I have been working with the RS-1000 since October and have developed a feel for how it feels. The WDS is physically larger and weighs more - how much more I don't yet know but once I find out I'll tell.

Jury is out on the lens retention; the WDS while larger only has one moveable bar while the RS-1000 though smaller has two. It appears that it would be slightly easier to change lens on a WDS because of the one bar I still believe in Murphy's Law and like the system the RS-1000 has; guess I'm a belt and suspenders guy after all.

I don't know how the difference in movements will affect my shooting style but plan to find out shortly and will report on that.

The WDS has very large knobs for movements; I wouldn't be surprised if these came in handy in cold weather when gloves are needed. That said I did shoot my RS-1000 in knee deep snow using gloves and had little problem with precise movements.

Speaking of precise movements. My very first thought upon unpacking this was I did not like (as in no way in hell) what I thought was a lack of witness marks on the front for rise and fall. It wasn't until I put a lens on did I see how the little white mark on the lensboard acts as the witness mark. So now I feel better and have stepped away from the edge.

This brings me to the final thought. Unless I missed them, I can find no witness marks on the rear of the body. The RS-1000 has these and they do come in handy. Image sitting on the edge of a 1000' drop where you want to take multiple images for a panorama or in-your-face multiple row/column image. I can (and have done just that) with the RS-1000. It "appears" that I will have to actually see the face of the WDS to ensure I have the proper amount of movement; this means I either have to turn the camera to face me each time I want to do a movement - which can be the kiss of death - or I somehow have to lean over and hope to see what I'm doing.

So - this is my initial subjective impressions. I'll be going out shortly to start testing it in the field here near home then more in Sedona next week.

I almost forgot to mention the tripod mount. I might have a spare plate laying around that I will think about putting on, in the meantime I need to mount this sidewise on my Novoflex this defeating it purpose of fine focusing. Just a little weird. 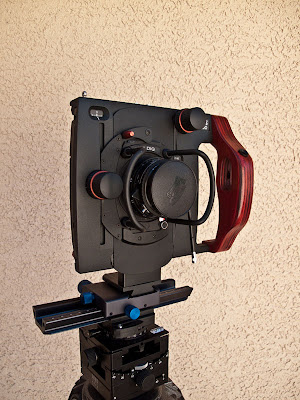 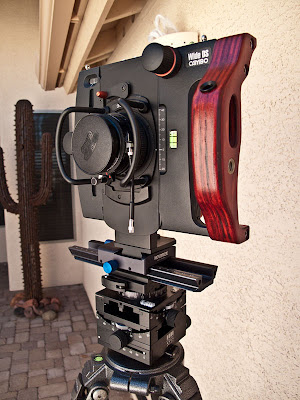 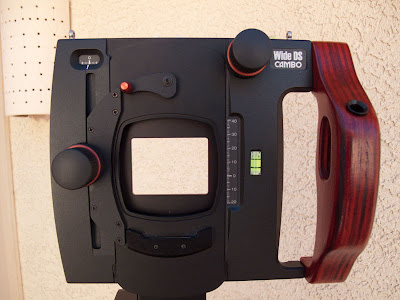 Please feel free to leave a comment if you have any suggestions or would like any specific information.

Don
Posted by ironcreekphotography at 6:17 PM