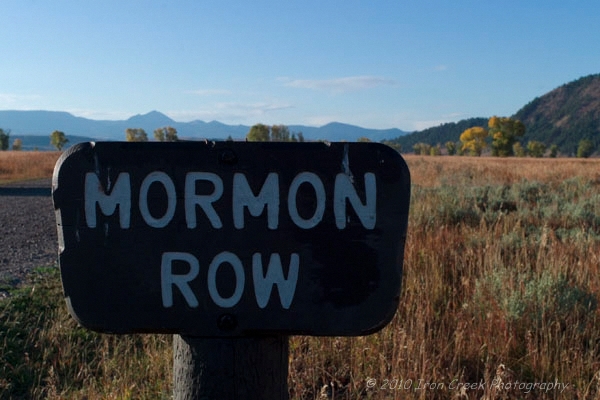 One of the most photographed barns in the United States is said to be the Moulton Barn which sits at the end of Mormon Row. The Moulton Barn sits adjacent to several out buildings among then a house. If you travel Mormon Row you'll see yet another barn on the (I believe) west side of the road that has equally stunning views of the Tetons in the foreground. This barn unlike the Moulton lacks any outbuildings and no corrals. Sandy and I have captured both barns and we now have a consensus that we like and prefer the "other" barn which since we have yet to find a name will call it the "Mormon Row Barn". If anyone who reads this can give us the proper name please do so.
Sunrise was at approximately 730 A.M. this morning with our first capture shortly afterwards. We waited until closer to 8 A.M. in order to give the sun enough time to get high enough as to light the barn in a rich warm glow and at the same time light the Tetons in the distance. We also wanted to shoot with the Cambo WRS1000/Phase One P45+ and compare the images to the Leica M9. I did a comparison between these two systems earlier this year while in Yosemite. This time I decided to do it slightly different. I took the image seen here with the medium format system while Sandy who is not very familiar with the Leica M9 captured the other.
There's no real testing other than just seeing the difference in image quality. Both images of the barn were processed using a combination of Photoshop CS5 and Capture One Pro. The Leica M9 capture was done using a Leica Elmarit-M 24mm lens f/3.4 1/500 at the optima ISO of 160. The medium format P45+ image was captured using a Schneider 72mm lens set at f/8 1/250 and an ISO of 100. I cheated (because I can) by using the movements of the Cambo 1000; this image was shot using 10mm left and right movements and merged using CS5. 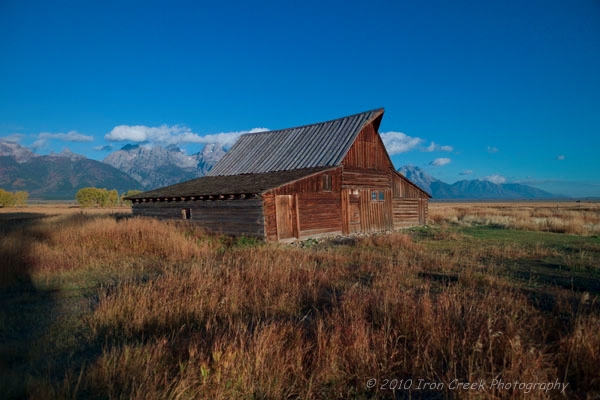 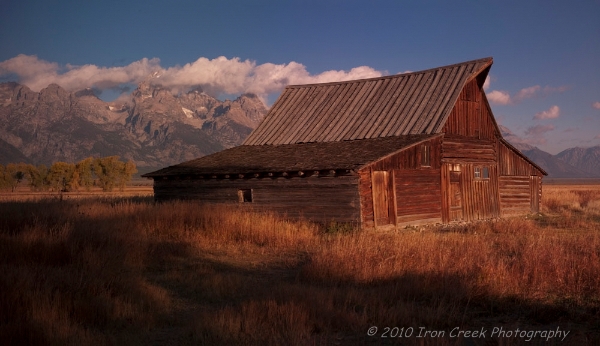 Cambo WRS1000/Phase One P45+ Schneider 72mm (taken at 854 am)
Why did I do this? Basically for the heck of it... This exercise once again reinforces my notion that the Leica M9 and Phase One P45+ systems are a great two camera system to have.
Your comments and questions are always welcome.


Posted by ironcreekphotography at 11:57 AM