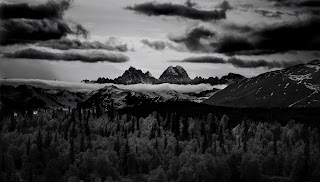 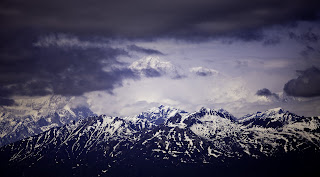 Our parents taught us if you can’t say anything good about a person then say nothing. Having said this, we decided at 1230 a.m. on Sunday June 15th to make a hasty exit from Denali Grizzly Bear RV where we had been staying since Monday June 9th and weren’t supposed to leave till Tuesday June 17th. Suffice it say that this is the only establishment so far on this trip that we will not recommend nor will we ever return to.

Leaving at 1230 in the morning like we did was very interesting. You really don’t get a feel for the “midnight sun” till you drive in it! We drove for about an hour finally stopping for the night at one of the many pull-overs along the road (Parks Highway). We woke at 730 a.m. and decided to continue driving into Denali State Park where we had been told that we just might get a peek of the “Mountain”. Along the way we visited the Alaska Veterans Memorial which was well worth the stop. 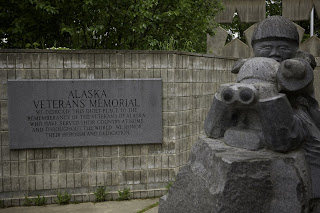 The Denali State Park has two RV sites that offer a view of the “Mountain”; one a north view, the other a more southern view; we opted for the southern view. We drove into Trapper Creek where we filled the truck and our stomachs at the Trapper Creek Outpost. While the breakfast was good the biscuits were not nearly as good as Barbara makes at Claire’s! After breakfast we drove the twenty miles back north to the southern view, paid our $10 for the night and took a nap.

Almost forgot to mention the cute little brown bear that we saw crossing road in front of us. We got to where he had crossed and Sandy grabbed the only camera that had a long lens on it (the 1Ds II) and attempted to take a couple images. 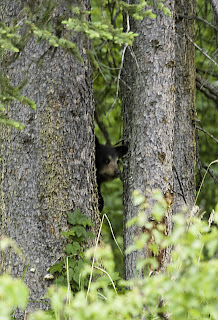 Images added June 17th from the Driftwood Inn & RV Park Homer AK
Sandy & Don
If you’d like to leave a comment click on Comments below……
Posted by ironcreekphotography at 10:03 AM